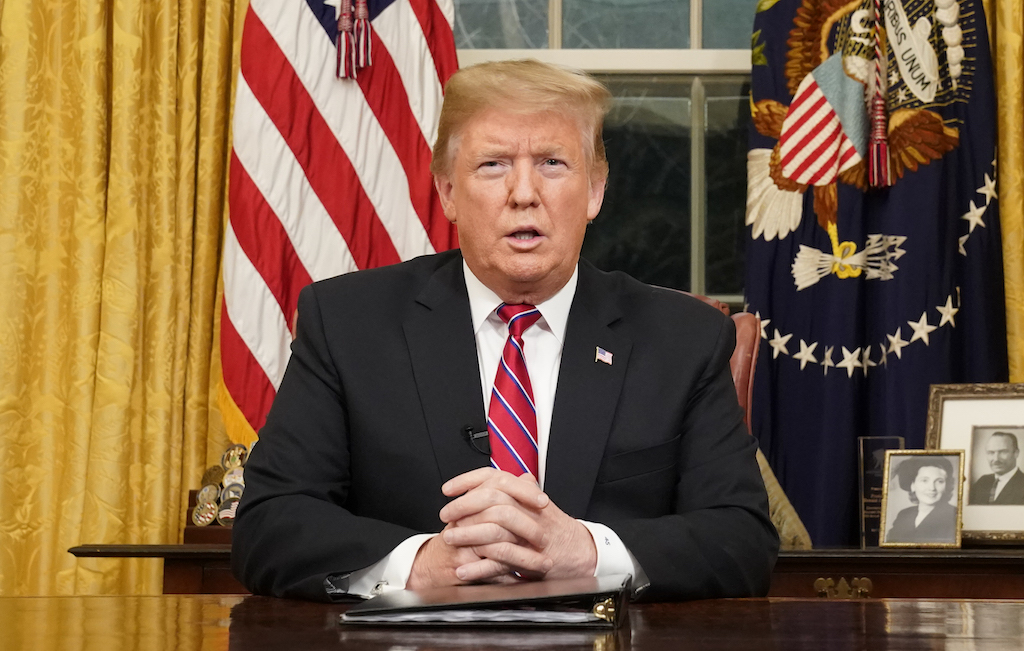 File: US President Donald Trump is accused of seeking Ukraine's help to smear Democratic presidential frontrunner Joe Biden ahead of the 2020 election.

WASHINGTON - Democrats in the US House of Representatives plunge into a formal impeachment inquiry into President Donald Trump on Wednesday, a move that could dramatically change the 2020 presidential race.

House Speaker Nancy Pelosi, who had for months resisted calls inside her party for Trump's impeachment, announced her decision after meeting with members of her party on Tuesday.

She described the Republican president's behavior as a "betrayal of his oath of office, betrayal of our national security and betrayal of the integrity of our elections."

Even if the Democratic-controlled House ultimately voted to impeach Trump, it is unlikely to lead to his removal from office. Republicans hold a slim majority in the Senate, where an impeachment ruling would need a two-thirds majority to pass.

But the process could damage the president's image as he vies for re-election, with only about 45% of Americans approving of his performance as president, especially if damaging information comes out during public hearings.

It could also boost Trump if Americans believe Democrats are unfairly targeting the president.

The S&P 500 closed down 0.84% on Tuesday, hurt partly by the anticipation of Pelosi's announcement, and Asian shares were weaker on Wednesday because of the possibility of political uncertainty in the world's largest economy. The dollar nursed losses against most major currencies.

Pelosi's change of heart followed reports that Trump had pressured Ukrainian President Volodymyr Zelenskiy in a July 25 telephone call to investigate Biden, the former U.S. vice president, and his son Hunter, who had worked for a company drilling for gas in Ukraine.

READ: Trump says Biden would 'go down hard' if they fought

Trump has admitted that he discussed Biden and his son in the call, but denied putting any pressure on the Ukrainian leader despite his administration's withholding of nearly $400 million in military aid approved for Kiev by Congress.

Support from House members for impeachment has surged in recent days, fueled by anger over the Trump administration's refusal to comply with a law requiring the release of a whistleblower's complaint over the discussions with Ukraine.

Democratic Rep. John Yarmuth said that when Pelosi mentioned her phone call with Trump today, she said Trump had told her that "he'd like to figure this out," and Pelosi responded to Trump by saying, "Tell your people to obey the law."

The U.S. Senate voted unanimously on Tuesday, with no objections from Trump's fellow Republicans, for a resolution calling for the whistleblower's report to be sent to Congress.

The House is due to vote on a similar non-binding resolution on Wednesday.

The White House had refused to hand over the whistleblower's complaint to Congress but an administration official said late on Tuesday it was now preparing to release it by the end of the week and would most likely allow the whistleblower to meet with congressional investigators.

Trump's approval among Republicans remains strong. A Sept. 16-20 Reuters/Ipsos poll showed that 82% of registered Republicans approved of his job performance.

Kevin McCarthy, the party's leader in the House, accused Democrats of seeking to overturn the 2016 election. "This is all about politics. Not about facts," he said.

Pelosi had considered creating a select committee to lead the impeachment inquiry, but instead opted to rely on the House Judiciary, Intelligence, Foreign Affairs and other committees already conducting probes of the Trump administration.

Those investigations will continue and committee leaders will decide whether to hold public hearings.

Separately, Trump announced on Twitter on Tuesday that he would release a transcript of his telephone call with Zelenskiy.

House Intelligence Committee Chairman Adam Schiff said his panel was communicating with an attorney representing the whistleblower and that the individual would like to testify this week.

There will be a burst of hearings this week but lawmakers then leave Washington for two weeks and will not return until after the Oct. 14 Columbus Day holiday.