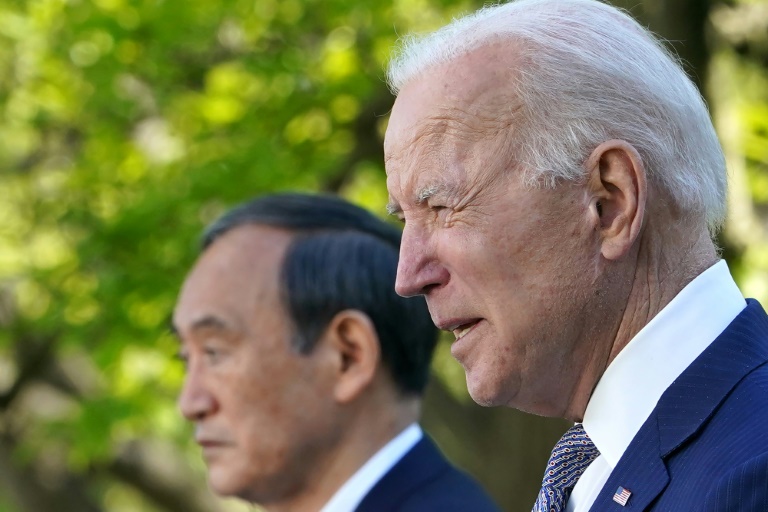 WASHINGTON - The United States and Japan vowed Friday to stand firm together against an assertive China and to step up cooperation on climate change and next-generation technology as President Joe Biden made his first summit a show of alliance unity.

Waiting nearly three months for his first foreign guest due to the Covid-19 pandemic, Biden told Prime Minister Yoshihide Suga that Japan enjoyed "our iron-clad support" on security issues and beyond.

"We're going to work together to prove that democracies can still compete and win in the 21st century," Biden, affectionately calling the Japanese leader "Yoshi," told a socially distanced news conference in the White House Rose Garden. 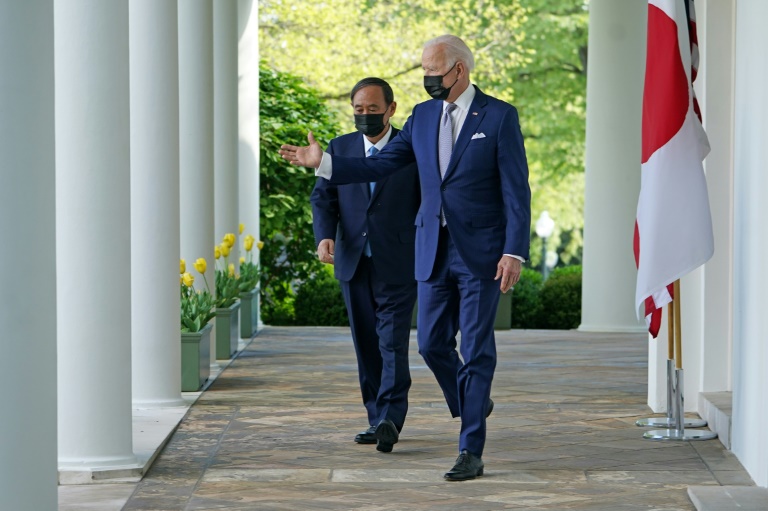 A joint statement called for "candid conversations" with China and did not hold back, raising concerns over Beijing's growing maritime moves, its clampdowns in Hong Kong and Xinjiang and growing tension over Taiwan.

The statement reiterated that the US-Japan Security Treaty covers the Japanese-administered Senkaku islands -- one of several areas in the region where Beijing, which calls them the Diaoyu, has increasingly shown its might.

The United States and Japan "recognize the importance of deterrence to maintain peace and stability in the region," the statement said.

"We oppose any unilateral attempts to change the status quo in the East China Sea," it said, in a line highlighted by Suga.

As Beijing steps up air incursions in Taiwan, Biden and Suga in the statement emphasized "the importance of peace and stability across the Taiwan Strait" and encouraged "the peaceful resolution of cross-Strait issues."

While cautiously worded, it was the first time a Japanese leader has joined a US president in a statement on Taiwan since the allies separately switched recognition from Taipei to Beijing in the 1970s.

Taiwan is an especially sensitive issue for Beijing, which claims the self-governing democracy.

The forthright statement comes despite Japan's efforts in recent years not to antagonize China, its top trading partner, including by not joining Western nations in sanctions over human rights.

Suga echoed Biden's themes as he described the US-Japan alliance as the "foundation of peace and stability" in the region.

"Freedom, democracy, human rights and the rule of law are the universal values that link our alliance," Suga said. 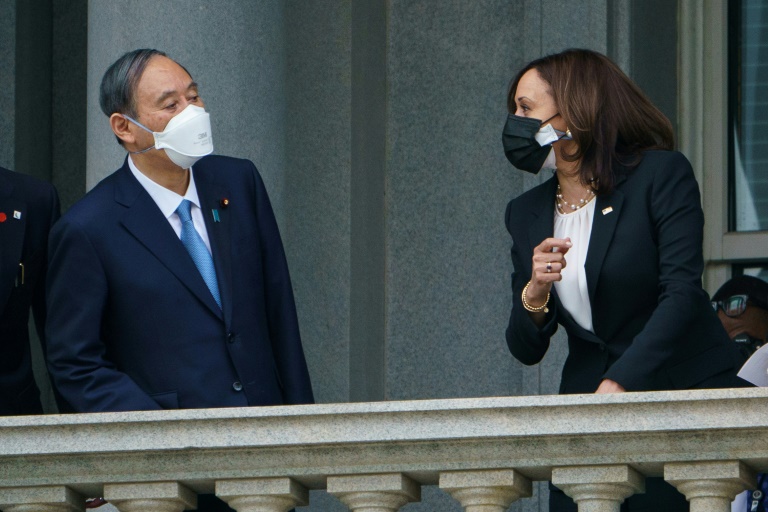 In a highly unusual comment by a Japanese leader on the US domestic scene, Suga also voiced concern over a wave of attacks in the United States against people of Asian descent.

Biden's second in-person summit will take place next month with South Korean President Moon Jae-in, part of the new administration's strategy of shoring up alliances as it zeroes in on China as America's most pressing challenge.

On another of his key priorities, Biden said he and Suga agreed on the need for "ambitious" climate commitments and indicated that both nations would soon announce goals by 2030.

Biden will lead a virtual summit next week in hopes of rallying climate pledges amid growing evidence of a planetary crisis as average temperatures hit record highs and natural disasters become more frequent.

Japan, the world's third-largest economy, promised under the Paris accord to reduce emissions by 26 percent by 2030 but from 2013 levels -- a goal that experts say is not bold enough to meet Suga's goal of a carbon-neutral Japan in 2050. 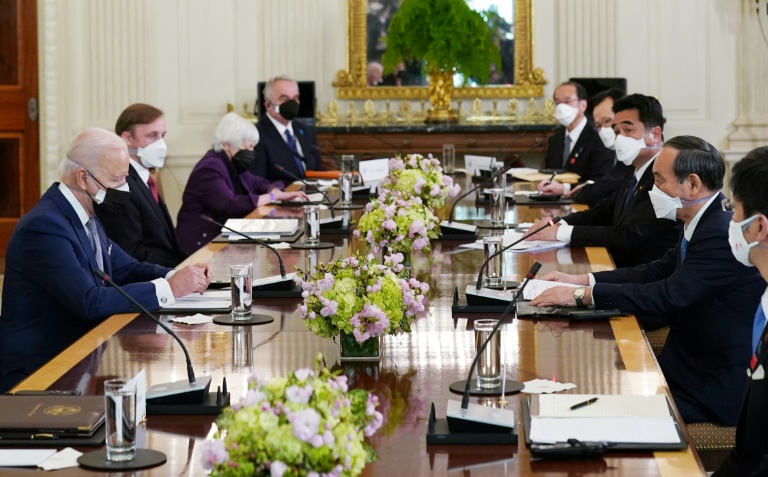 "We confirmed that Japan and the US will lead global decarbonization," Suga said.

Biden and Suga said they would step up joint development and testing of fifth-generation internet -- as well as the sixth-generation technologies of the future. 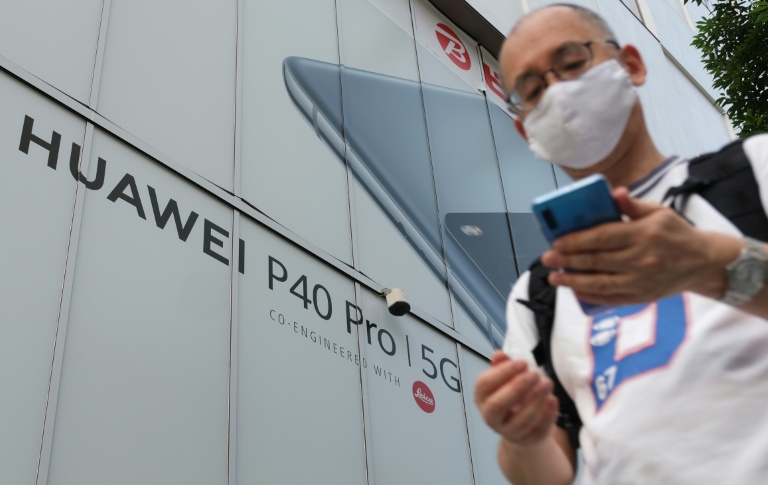 A pedestrian in Tokyo walks under an advertisement for Chinese telecoms company Huawei, whose strength in 5G internet has alarmed the United States

The United States and Japan must "maintain and sharpen our competitive edge" and ensure that "those technologies are governed by shared democratic norms that we both share -- norms set by democracies, not by autocracies," Biden said.

China's Huawei has taken an early dominant role in 5G, which is becoming a crucial part of the global economy, despite heavy US pressure on the company, which Washington argues poses threats to security and privacy. 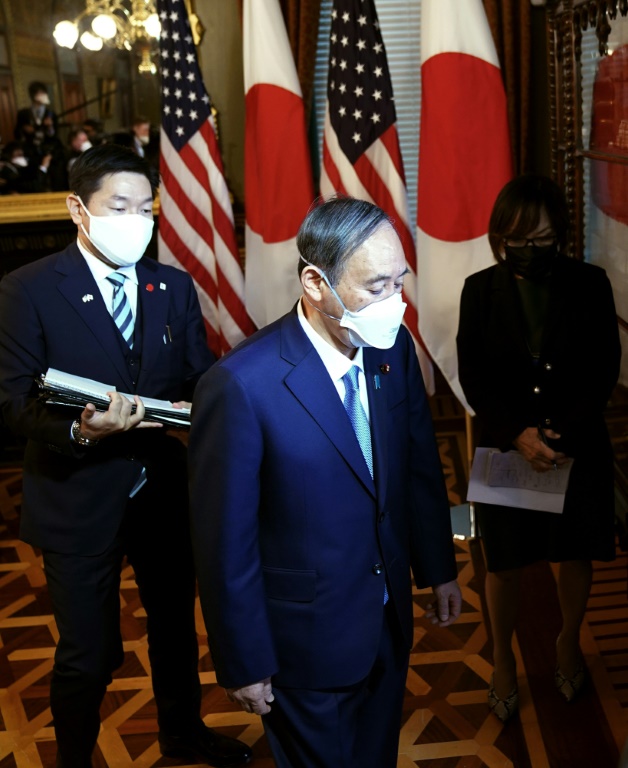 A joint statement said the United States had committed $2.5 billion and Japan another $2 billion.

Masashi Adachi, a special advisor to Suga, told reporters that the agreement was more about joint development than fresh funding, pointing to several projects underway in Japan on 5G development.

Suga in September succeeded his ally Shinzo Abe, Japan's longest-serving prime minister, who was one of the few democratic allies to manage to preserve stable relations with Biden's volatile predecessor Donald Trump.

Biden and Suga also recommitted to the denuclearization of North Korea and discussed next moves following Trump's unusually personal diplomacy with the totalitarian state.