US looks poised to polish off Europe in Ryder Cup

BROOKLINE - A high-octane United States took a commanding 11-5 lead into Sunday's singles at the Ryder Cup, where Europe needed an unprecedented comeback to retain the coveted golf trophy.

The Americans, hungry for victory after losing four of the last five editions, including  in 2018 in France, need just 3.5 points from Sunday's 12 singles matches while Europe need nine to reach the 14 points they require to retain it.

With nine of the world's top 11 players to send out, US captain Steve Stricker said he was confident, but not complacent.

"I'm confident they're going to go out and give it their best," Stricker said. "They're fired up to go out there."

No team has come back from a deficit of more than four points to win the biennial match play showdown, being played this year after a one-year coronavirus pandemic delay.

The United States rallied from 10-6 down to win at Brookline in Massachusetts in 1999 and Europe battled back from 10-6 in the "Miracle at Medinah" in 2012.

Stricker said he knew his players had Medinah in the back of their minds.

"That's why they're focused, I see it in their eyes."

But the first match out immediately swung Europe's way as Rory McIlroy birdied the first and Olympic gold medallist Xander Schauffele missed a short birdie putt to give the Northern Ireland star a 1-up lead. 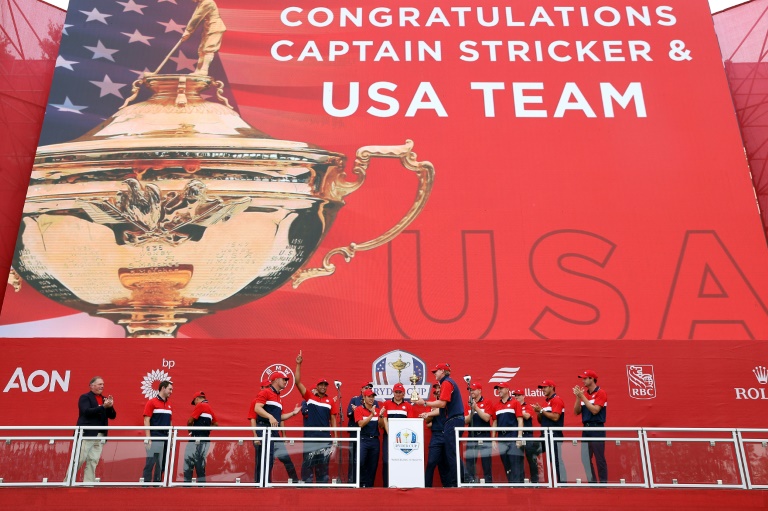 Do or die: Europe's Rory McIlroy prepares in the locker room prior to his singles match against American Xander Schauffele at the 43rd Ryder Cup

Schauffele, a two-time runner-up in major championships, has thrived in his first Ryder Cup, winning all three of his matches in foursomes and four-balls play.

McIlroy, meanwhile, lost all three of his matches in his sixth Cup appearance and was held out of one session for the first time in his career.

Harrington said McIlroy was eager to go out early in singles and try to contribute to the European cause.

"Why not let him go out there and see what he can do," said Harrington, who said he had urged his players not to think of the monumental task Europe faced but to focus instead on their own matches.

"On paper, it's a big mountain. I need nine points, but each individual can only win one point."

That said, he knew his early starters had to produce.

"We aren't going to get nine points without the early guys winning."

Patrick Cantlay, winner of four US PGA Tour titles this year including the Tour Championship that sealed his FedEx Cup playoff crown, has won two and drawn one in his Ryder Cup debut.

He teed off in the second match against another newcomer in battling Shane Lowry, the 2019 British Open champion who showed his mettle in a Saturday four-balls win, draining an 11-foot par putt to seal a 1-up victory alongside Tyrrell Hatton against Harris English and Tony Finau.

One of the few matches in which Europe can be considered strong favorites, world number one Jon Rahm took on 21st-ranked Scottie Scheffler.

Rahm has been outstanding for Europe, winning 3.5 points over the first two days, while Scheffler, although he hasn't always looked his best, hasn't lost a match yet teaming with Bryson DeChambeau in four-balls.

Johnson has keyed the US surge this week, with four victories in four matches so far.

A singles victory on Sunday would make him the first American since Larry Nelson in 1979 to go five-from-five.