US marks 18th anniversary of the 9/11 attacks 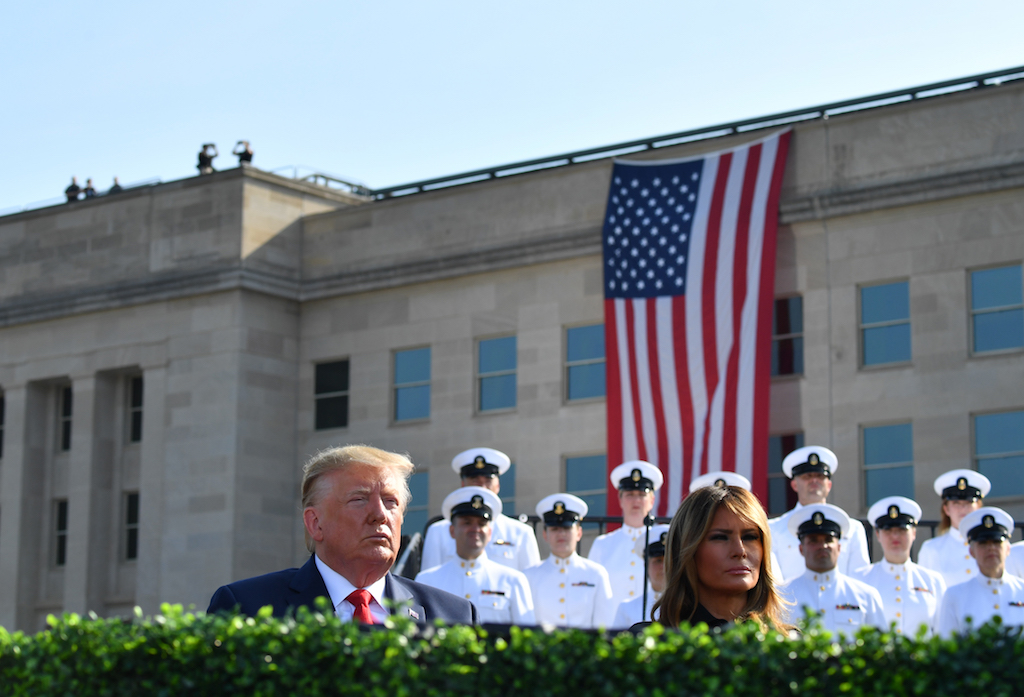 US President Donald Trump and First Lady Melania Trump attend a ceremony marking the 18th anniversary of the 9/11 attacks, on September 11, 2019, at the Pentagon in Washington, DC.

NEW YORK - President Donald Trump pledged to hit the Taliban "harder" than ever as America marked the 18th anniversary on Wednesday of the 9/11 attacks that led the country into war in Afghanistan.

Trump spoke after aborting what would have been a historic peace summit and as relatives remembered the victims of the single deadliest attack on US soil at ceremonies in New York and Washington.

After a solemn commemoration at Ground Zero in Manhattan, Trump spoke at a Pentagon event honoring the nearly 3,000 people killed in the attacks - announcing an unprecedented escalation of the military assault on the Taliban.

He said that over "the last four days" US forces have "hit our enemy harder than they have ever been hit before and that will continue."

The nature of the offensive was not immediately clear but Trump said it was ordered after he canceled peace talks with the Taliban over the weekend in retaliation for a bomb attack that killed one US soldier last week.

He also warned militants against ever carrying out an attack in the US again.

"If for any reason, they come back to our country, we will go wherever they are, and use power, the likes of which the United States has never used before," Trump said.

"I'm not even talking about nuclear power. They will never have seen anything like what will happen to them," he added.

The warlike comments came as Al-Qaeda, which carried out the attacks, released a video calling for assaults on American, European, Israeli and Russian interests.

The militant group's leader Ayman al-Zawahiri criticized "backtrackers" from jihad in the 33-minute video, according to Site Intelligence Group.

Trump announced on Twitter Saturday that he'd been about to meet leaders of the Taliban -- who harbored Al-Qaeda in Afghanistan -- on Sunday at his Camp David presidential retreat.

The announcement angered some, coming so close to the September 11, 2001 anniversary.

They held poignant moments of silence at 8:46 am (1246 GMT) and 9:03 am, the precise times that the passenger jets struck the North and South Towers.

In what has become an annual tradition, relatives began reading out the long list of those who were killed, saying a few words about each victim, in a ceremony that took almost four hours.

"We love you, we miss you and you will always be America's heroes," said one woman after reading out the names of her brother and cousin.

Relatives hugged and consoled each other and left roses at the memorial. Some held up placards with images of their loved ones who were killed.

Bagpipes played as police officers walked into the ceremony carrying the US flag before the US national anthem was played.

New York Governor Andrew Cuomo, Mayor Bill de Blasio, and his predecessors Michael Bloomberg and Rudy Giuliani were among those who attended.

Trump and First Lady Melania Trump welcomed victims' families and survivors to the White House where they marked the anniversary with a moment of silence before the president headed to the Pentagon for his speech.

Al-Qaeda hijacked four planes. The third hit the Pentagon and the fourth, Flight 93, crashed in a field in Shanksville, Pennsylvania.

In addition to those killed on September 11, thousands of first responders, construction workers and residents have since developed illness, many of them terminal, as a result of inhaling the toxic fumes.