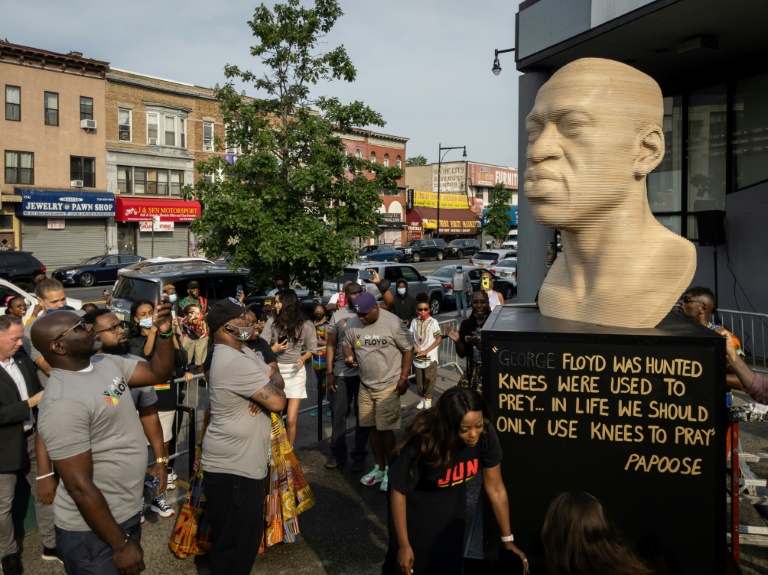 A bust of George Floyd, the Black man killed by a police officer in Minneapolis, was unveiled on June 19, 2021 in Brooklyn, New York

NEW YORK - With marches, music and speeches, Americans on Saturday celebrated "Juneteenth", the newly declared national holiday that marks the end of slavery and which comes a year after George Floyd's murder sparked anti-racism protests.

Hundreds of events were planned across the country, from New York to Los Angeles, and most notably in Galveston, Texas, the symbolic heart of the Juneteenth commemoration.

For on June 19, 1865, it was in that Texas coastal area that the Union army -- victorious after the bitterly fought Civil War -- announced to African Americans that, even if some in Texas were trying to ignore it, enslaved people were now free.

Slavery was formally abolished in December 1865, with the adoption of the 13th amendment to the US Constitution, but Juneteenth has remained the emblematic date marking the freeing of enslaved Americans.

This year's Juneteenth celebrations will be all the more celebratory, coming just days after President Joe Biden signed legislation making it a national holiday, and also at a time when pandemic-imposed restrictions on public gatherings are steadily being eased.

"It was a long time coming," said 68-year-old Cheryl Green. She was attending the unveiling in Brooklyn of a bust of George Floyd, the Black man killed by a white policeman in Minneapolis in May 2020.

"It's good that people get to recognize what happened," said Green, an African-American resident of the Flatbush neighborhood. "Changes are being made slowly, but surely we'll get there."

Floyd's killing touched off a sweeping protest movement, in the United States and around the globe, against racism and police violence toward minorities.

That movement helped boost the visibility of Juneteenth -- a date that many Americans, including many African-Americans, had not heard of even two years ago.

An opinion survey published Tuesday by the Gallup institute found that 28 percent of Americans knew "nothing at all" about the anniversary.

"I didn't learn about Juneteenth until I got to high school," said Farah Louis, a Black city official in New York, who was attending the Floyd unveiling in Brooklyn.

She said Juneteenth should be used to "educate our young people" about the daunting conditions facing Black people through American history. 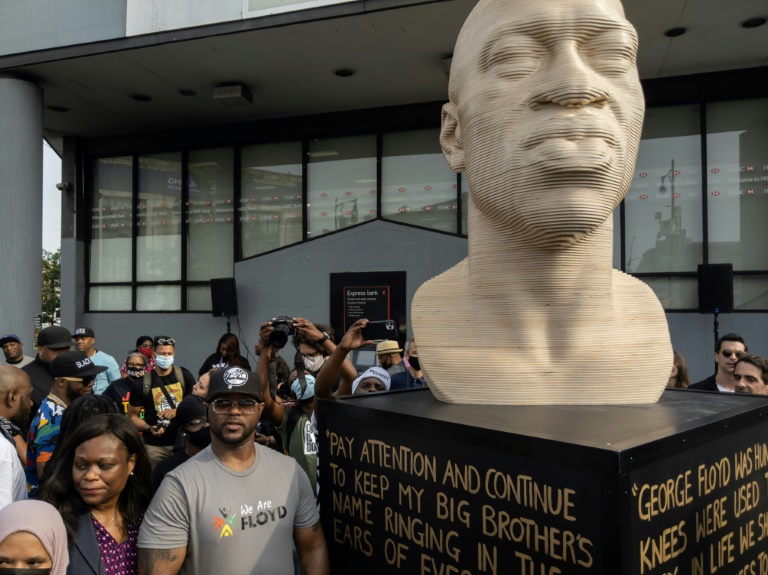 Celebrating Juneteenth now seems "a bit surreal" at a time legislators in many Republican-led states are passing laws that will suppress the vote and "most acutely affect communities of color," tweeted Sharif Street, a Black state legislator from Pennsylvania.

From January through May, 14 states, notably Georgia and Florida, passed laws limiting opportunities to vote -- measures seen as aimed at reducing the influence of minority voters, particularly African-Americans.

To Sharif Street, it is "a reminder that our wins are not permanent, even with powerful symbols of progress," like the right to vote.

Draft legislation to guarantee wider access to the vote is currently being debated in the US Senate, but with many Republicans opposing it, its fate appears uncertain.

To Farah Louis, the proclamation of Juneteenth as a national holiday, coupled with the impetus created by the George Floyd movement, offer "an opportunity" for the Black community.

"You have to strike while the iron is hot," she said, citing among other issues the idea of government-paid reparations to compensate the descendants of enslaved people.

On Friday, the mayors of 11 American cities, including Los Angeles and Denver, vowed to pursue the question of how best to carry out reparations. They invited the Congress and the US government to follow their example.

"We see change" in the country, said Terrence Floyd at the unveiling of the bust honoring his brother.

Terrence Floyd, who lives in New York, recently created a group called "We Are Floyd" to help "keep the change going," he told AFP.

"Because right now, it's not a moment. It's a movement.