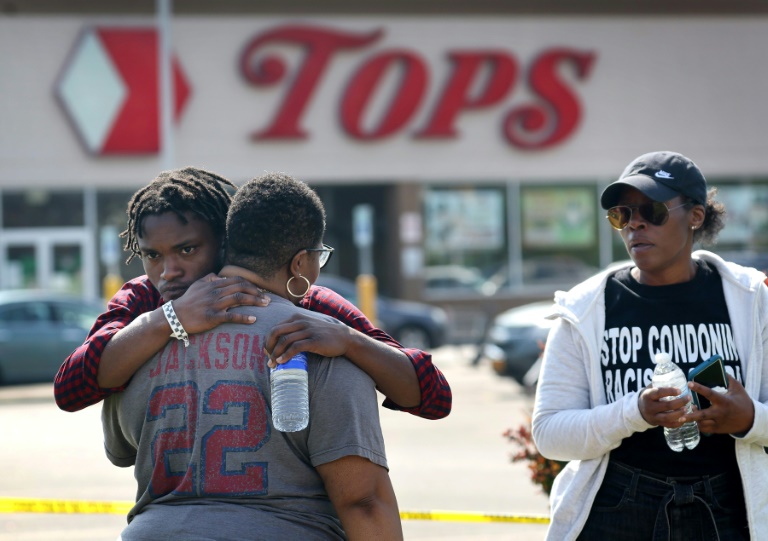 People embrace at a vigil outside of Tops Friendly Market in Buffalo, New York a day after a mass shooting left 10 people dead, in what authorities described as a racially motivated attack

US - Grieving Buffalo residents held vigils Sunday after a white gunman who officials have branded "pure evil" shot dead 10 people at a grocery store in a "racist" rampage.

The police commissioner for the US city in western New York, Joseph Gramaglia, told reporters the 18-year-old suspect did "reconnaissance" on the predominantly Black area surrounding Tops Friendly Market and drove there from his hometown of Conklin, more than 200 miles (322 kilometers) away.

Wearing heavy body armor and wielding an AR-15 assault rifle, the shooter killed 10 people and wounded three others -- almost all of them Black -- before threatening to turn the gun on himself. Police said officers talked the gunman down before arresting him.

The suspect, identified as Payton Gendron, was arraigned late Saturday on a single count of first-degree murder and held without bail, the Erie County district attorney's office said. He pleaded not guilty. 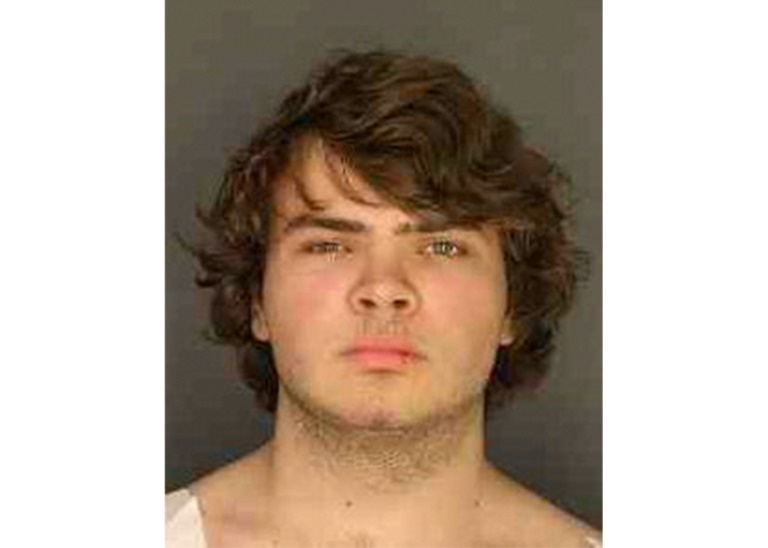 Payton Gendron has been arraigned for the killing of 10 people in a mass shooting at a grocery store in Buffalo, New York

"The evidence that we have uncovered so far makes no mistake that this is an absolute racist hate crime," Gramaglia said on Sunday, adding Gendron had a rifle and shotgun in his car.

Buffalo Mayor Byron Brown was unequivocal about the shooter's motivations: "This individual came here with the express purpose of taking as many Black lives as he possibly could."

Gramaglia said the gunman had last year made "generalized threats" at his high school, after which state police referred him to a hospital for a mental health evaluation that lasted approximately one day and a half.

He was then released.

Hochul, a Buffalo native, described the shooting as a "military-style execution" and said racist messaging was "spreading like wildfire," especially online.

In angry and mournful tones, speakers decried easy access to powerful guns and the latest eruption of racist violence, in what has become tragically routine brutality in the United States.

Just hours later, in California, a shooting at a church southeast of Los Angeles left one person dead and four others "critically wounded," according to the Orange County Sheriff's Department. 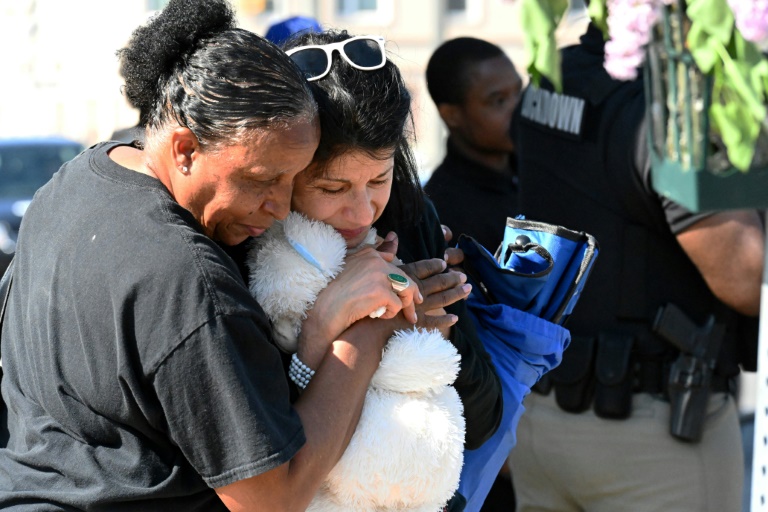 People mourn near a Tops Grocery Store in Buffalo, New York on May 15, 2022

In Washington, President Joe Biden -- whom the White House said would visit Buffalo on Tuesday -- condemned the racist extremism and "hate that remains a stain on the soul of America."

The attack evoked memories of recent US history's most devastating attacks, including a white man's 2015 massacre of nine worshippers in a predominantly Black South Carolina church, and the 2019 attack by a white man in Texas that claimed 23 lives, most of them Latino.

She paid tribute to the victims, who included shoppers and store workers, describing an elderly woman who planted trees on her block, and a woman who was food shopping after visiting her husband at the nursing home.

"I held in my arms a young lady who worked at Tops, who was so afraid that she was about to die, who witnessed the bloodshed, who shaked and quivered in my arms," James said. 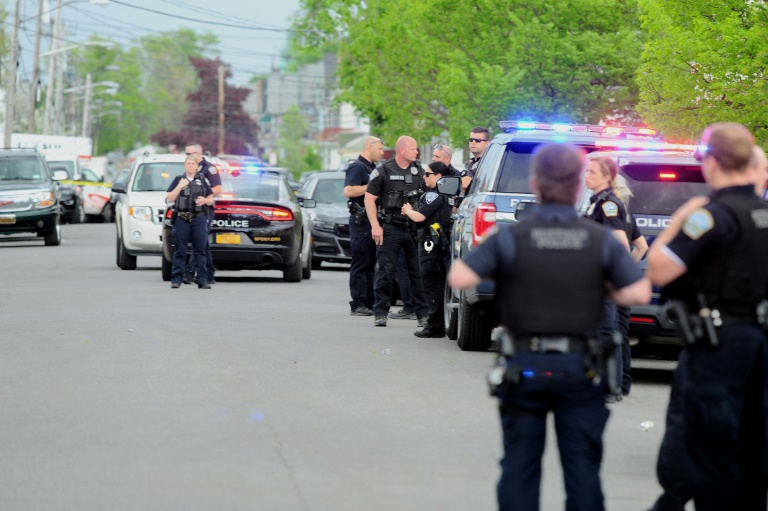 "Who is afraid for her community, afraid also for herself."

Denise Walden, a Buffalo resident, voiced fear that she "can't go to the grocery store around the corner from my house because I might not get home to my kids safe."

Derryl Long, who was born in Buffalo, told AFP he "can't comprehend what was going through this man's mind."

"He knew it was a Black community," the 67-year-old continued. "It just hurts."

The gunman shot four people in the store's parking lot, three of them fatally, before entering the supermarket.

Among those killed inside was a retired police officer working as a security guard. He fired several shots at the assailant before being shot himself, police said.

Along with state charges, the rampage is being investigated as a federal hate crime "perpetrated by a racially motivated violent extremist," Stephen Belongia, special agent in charge of the FBI's Buffalo field office, told reporters.

Media reports linked the shooter to a 180-page manifesto that described a white supremacist ideology and laid out a plan to target a mainly Black neighborhood. 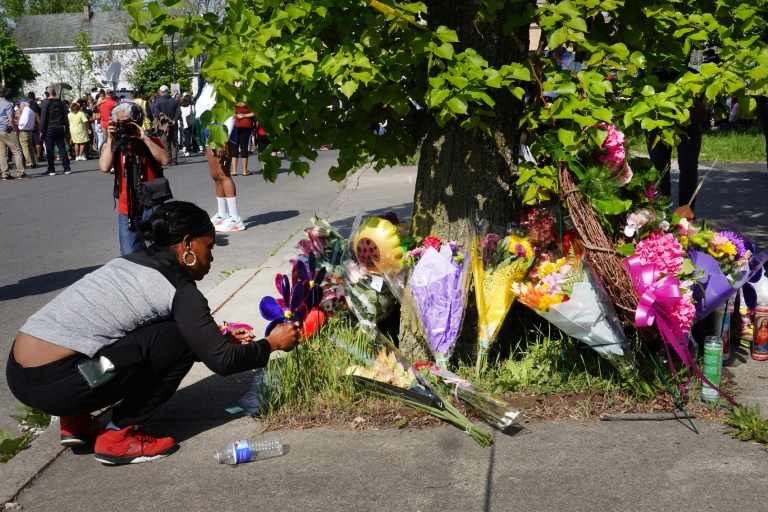 A woman places flowers at a makeshift memorial in Buffalo, New York, as outrage across the United States grew over the latest mass shooting

A spokesperson for Twitch told AFP the shooter used the platform to broadcast the attack live and that the streaming service had removed the video within "two minutes."

Along with mentioning the South Carolina church shooting, the gunman reportedly said he had been "inspired" by the shooter who killed 51 people at two New Zealand mosques in March 2019.

In a video call to True Bethel Baptist Church, New York Senator Chuck Schumer called racism "the poison of America" and urged fellow lawmakers to "finally ban the weapons of war from our streets."

But facing a powerful pro-gun lobby, past congressional efforts at tightening the nation's gun laws have generally fallen short -- even after horrific shootings.