US warns Russia could attack Ukraine 'any day' 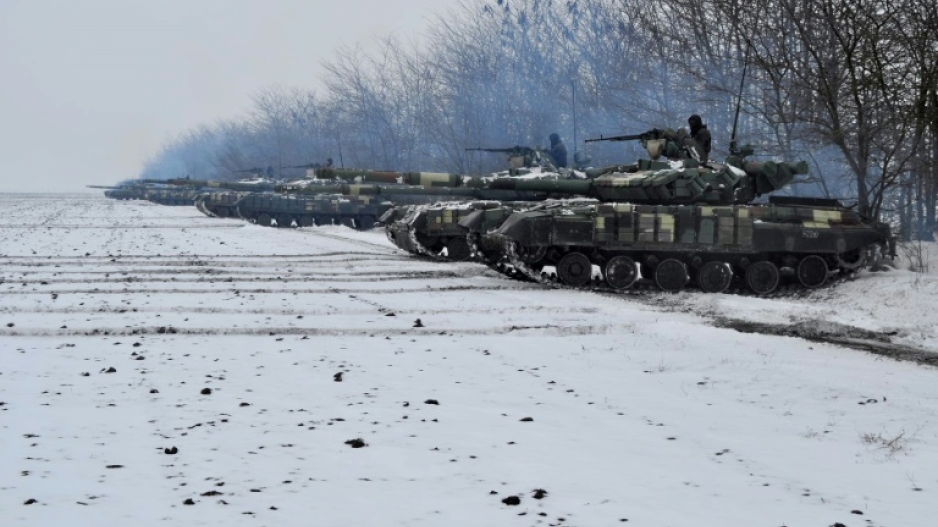 Tanks of the Ukrainian army on manoeuvres. AFP/Press service of General Staff of the Armed Forces of Ukraine

WASHINGTON - The United States dramatically raised the alarm Friday over Ukraine, warning that a Russian invasion starting with civilians caught under aerial bombing could begin in days and telling US citizens to leave within 48 hours.

An attack by the more than 100,000 Russian troops currently massed next to Ukraine "could occur any day now," White House National Security Advisor Jake Sullivan told reporters in Washington.

Dismissing speculation that the Kremlin would never trigger the crisis while the Beijing Olympics were still underway in close Russian ally China, Sullivan said such an attack "could occur" before the Games end on February 20.

The scenario of an imminent attack is "a very, very distinct possibility," Sullivan said.

READ: Western leaders to confer on Ukraine amid war fears

While stressing that it was not yet known whether President Vladimir Putin had taken a decision, saying "we can't predict the exact determination," Sullivan made clear that the United States was bracing for the worst, including a "rapid assault" on the capital Kyiv.

"If a Russian attack on Ukraine proceeds, it is likely to begin with aerial bombing and missile attacks that could obviously kill civilians," he said. "Any American in Ukraine should leave as soon as possible, and in any event in the next 24 to 48 hours."

Sullivan spoke shortly after President Joe Biden and six European leaders, the heads of NATO and the European Union held talks on the worst crisis between the West and Russia since the end of the Cold War.

A US official said Biden would speak with Putin on Saturday, while the French government said that President Emmanuel Macron would also be calling the Russian leader on Saturday.

Underlining the bleak outlook, a string of countries joined the exodus of diplomats and citizens from Ukraine, while oil prices surged and US equities tumbled.

Sullivan repeated warnings that Russia risks severe Western sanctions and said that NATO, which Putin wants to push back from eastern Europe, is now "more cohesive, more purposeful, more dynamic than any time in recent memory."

The Pentagon announced it was sending 3,000 more troops to bolster ally Poland.

And US Secretary of State Antony Blinken told his Ukrainian counterpart Dmytro Kuleba in a phone call "that Ukraine continues to have the United States’ enduring and steadfast support for its sovereignty and territorial integrity," the State Department said.

READ: 'Everyone is afraid': Fear of unknown in Ukraine warzone

Following the earlier group phone call between US and European leaders, German Chancellor Olaf Scholz's spokesman said "the aim is to prevent a war in Europe." But if Moscow fails to pull back, "the allies are determined to jointly take swift and deep sanctions against Russia."

Sullivan spoke to der Leyen's chief of staff Bjoern Seibert by video call on Friday to coordinate "the details of a potential transatlantic response, including both financial sanctions and export controls," according to a White House statement.