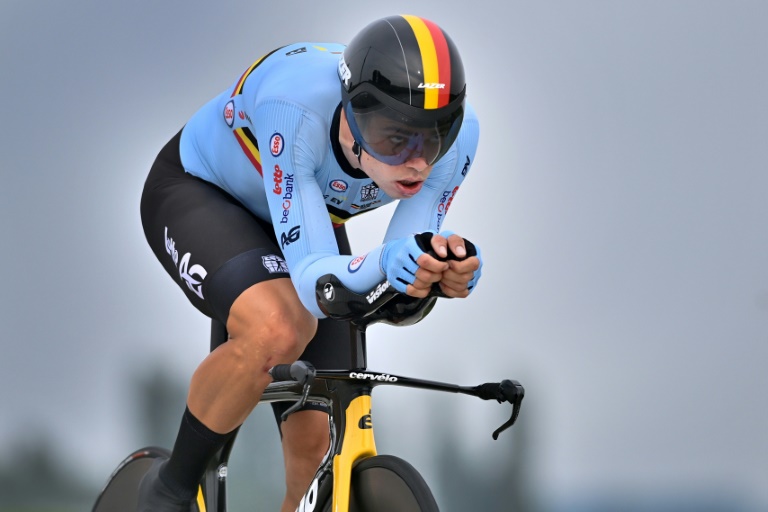 Wout Van Aert claimed second in the World Championship time trial and is aiming to finish one place better in the road race. AFP/David Stockman

LEUVEN - Belgium's Wout van Aert embarks from Antwerp on Sunday as favourite to win cycling's 2021 world road race championships but faces at least a dozen serious contenders on the epic 268.3km slog over the cobbled hills of Flanders.

The world championship road race is rarely claimed by a Grand Tour winner, it is instead a battle between the riders who thrive in the cut and thrust of one-day do-or-die efforts.

This year's gruelling and treacherous route in cycling's heartland means even the strongest of contenders might simply run out of energy or willpower.

The winner wears the fabled rainbow jersey for the next year and the current champion, swashbuckling Frenchman Julian Alaphilippe, says that made him a marked man this season.

"I was the man to beat, but it was so good to wear the jersey at the Tour," said Alaphilippe.

Alaphilippe will lead the peloton out of the world diamond capital and port city of Antwerp to execute a series of circuits constantly switching between two loops, round the Leuven circuit with four hills and the Flandrien circuit with seven short climbs.

Cycling is the national sport in Belgium and the home fans are expecting Van Aert, with the aid of 21-year-old Remco Evenepoel, to win when the remnants of the starting line up swoop into the university town of Leuven.

Both have already stood on the podium this week, with Van Aert second and Evenepoel third in the men's individual time trial.

"We are very excited," Evenepoel said. "We have done the recon and now were ready."

He added that Van Aert was the man the Belgian team were hoping to lead to victory.

"Having a World Championship in our home country and being the guy to watch is a nice feeling," said Van Aert, who was second in the Olympic road race in Japan.