Vietnam says every city, province at risk of COVID-19 infection 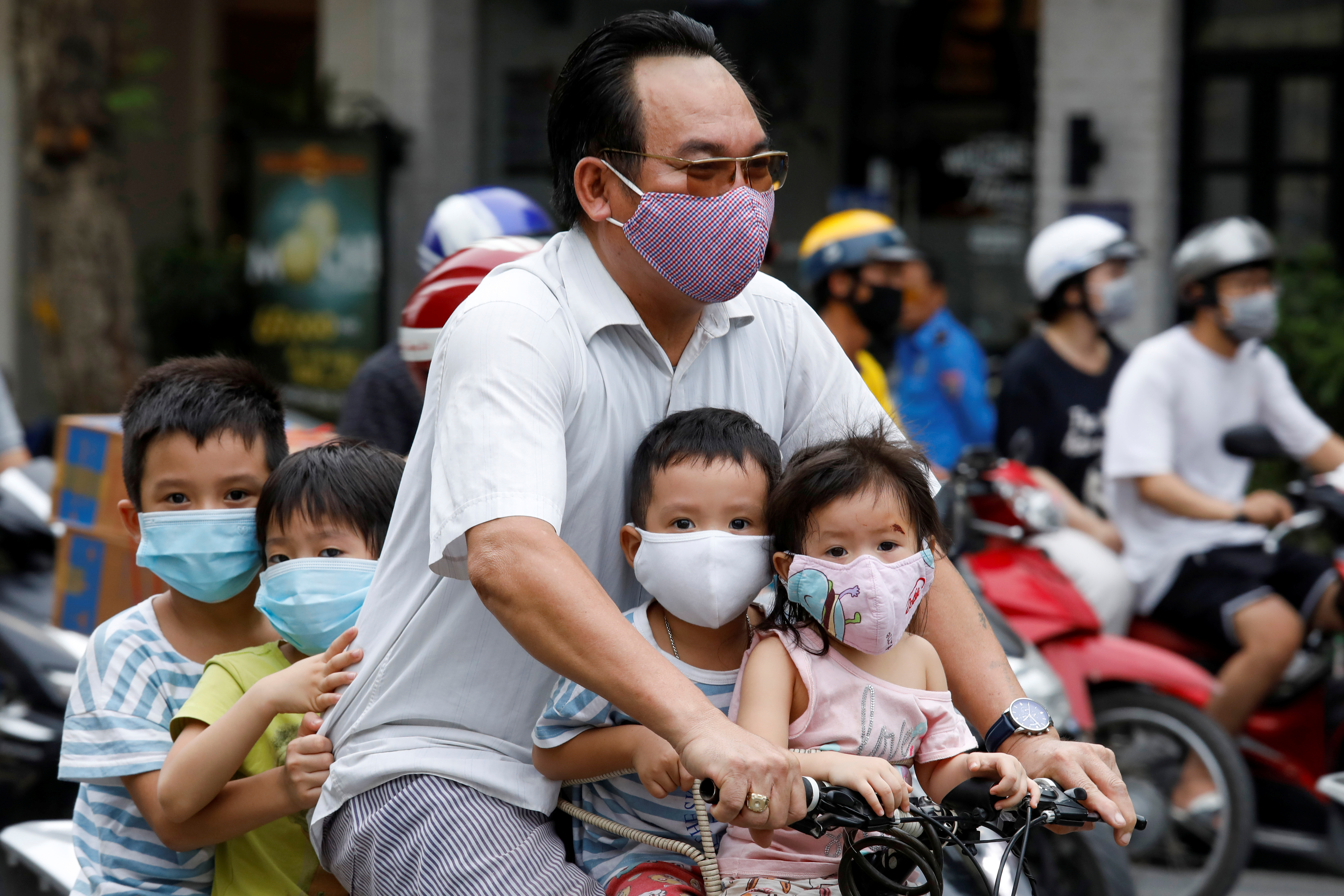 A man and his children, all wearing protective masks, ride a bicycle on a street during the coronavirus disease (COVID-19) outbreak, in Hanoi, Vietnam July 27, 2020.

HANOI - Vietnam, virus-free for months, was bracing for another wave of COVID-19 infections on Wednesday after state media reported new cases in Hanoi, Ho Chi Minh City and the Central Highlands linked to a recent outbreak in the central city of Danang.

Prime Minister Nguyen Xuan Phuc said the current wave of infections was different to a second wave Vietnam fought in March, and every province and city in the country was at risk, state broadcaster Vietnam Television (VTV) reported.

Thanks to a centralised quarantine programme and an aggressive contact-tracing system, Vietnam had managed to keep its coronavirus tally to just 450 cases, despite sharing a border with China.

With over 95 million people, Vietnam is the most populous country in the world to have recorded no deaths from the virus, and until now no locally transmitted infections had been reported for months.

That record is now under threat following an outbreak last weekend in Danang, where tens of thousands of domestic tourists were vacationing thanks to discounted travel deals.

The government on Tuesday suspended all flights to and from Danang for 15 days. At least 30 cases of the novel coronavirus have been detected in or around the city.

About 18,000 tourists who had been in Danang have returned to the southern business hub Ho Chi Minh City, authorities said on Tuesday.

Prime Minister Phuc said tourist hubs throughout the country had to step up vigilance, and that Danang must go under "strict lockdown", VTV said.

In Hanoi, a worker at a pizza restaurant who had recently returned from Danang had tested positive for the coronavirus and authorities had closed the business for disinfection, state media reported.

Vietnam's health ministry confirmed that case late on Wednesday, as well as an additional two cases in Ho Chi Minh City and another in the Central Highlands.

The source of the infection in Danang, origin of the current wave, remains unclear.

One of the cases, now in Ho Chi Minh City, first developed symptoms in Danang as early as June 26, the health ministry said.

Vietnamese scientists have said the strain of the coronavirus found there was more infectious than the earlier strain, and this latest strain had also been previously detected in Bangladesh, Britain and Ireland.

The government has not officially linked the new cases to illegal immigration, but Prime Minister Phuc has ordered police to strengthen a crackdown on illegal entries.

State media on Sunday said police in Danang had arrested a 42-year-old Chinese man suspected of heading a criminal group engaged in smuggling people across the border from China.

In a rare rescue flight, Vietnam repatriated 140 construction workers infected with COVID-19 from Equatorial Guinea on Wednesday, a state medical official told Reuters. The workers will be treated at a hospital outside Hanoi, the official said.

The health ministry has yet to add the cases from Africa to its coronavirus tally.