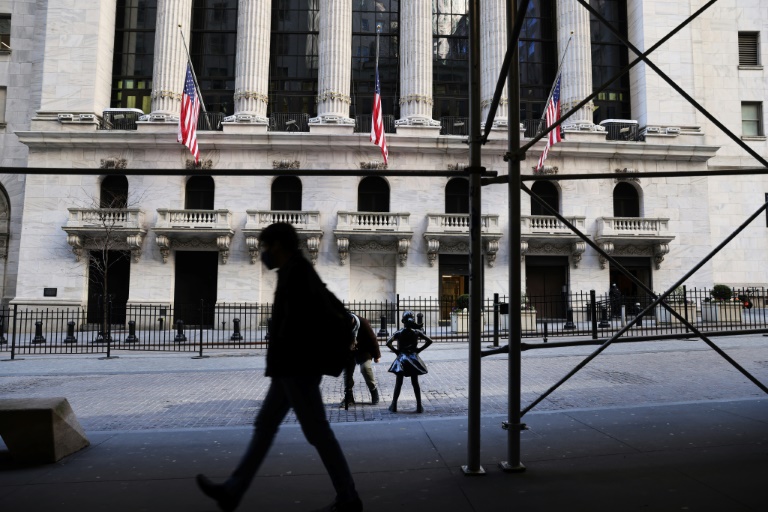 The Dow and S&P 500 ended at the week at records, extending the 2021 equity rally. AFP/Spencer Platt/Getty Images

NEW YORK - Wall Street stock indices were at records on Friday to conclude a strong week amid optimistic growth expectations as more people are vaccinated, while equity markets elsewhere were mixed.

Both the Dow and S&P 500 finished the week at all-time highs, the latest in a run of new records.

US stocks have been on a roll most of 2021, cheered by US President Joe Biden's $1.9-trillion stimulus package enacted last month and an accelerating vaccination campaign in the world's largest economy.

At the same time, the Federal Reserve has remained committed to highly accommodative monetary policies, a stance reiterated in recent days by Chair Jerome Powell.

Excluding volatile food and energy prices, the producer price index was up 0.6 percent in March, and for the latest 12 months increased 3.1 percent, accelerating from recent levels, the report showed.

"Investors have gotten the message from the Fed that their new approach is to let inflation run hot until we're at full employment," Hogan said.

Earlier bourses in Paris and Frankfurt rose modestly, while London pulled back.

"Investors are unsure if the unwind from growth is over," remarked OANDA senior analyst Edward Moya.

The main stock indices in Hong Kong and Shanghai gave up around one percent as traders kept tabs on China-US relations after Washington restricted trade with top Chinese supercomputing centers on security grounds.

Among individual companies, Boeing fell 1.0 percent after telling 16 airlines flying the 737 MAX jet of a "potential electrical issue." The move prompted major US carriers to temporarily ground some of their MAX planes.