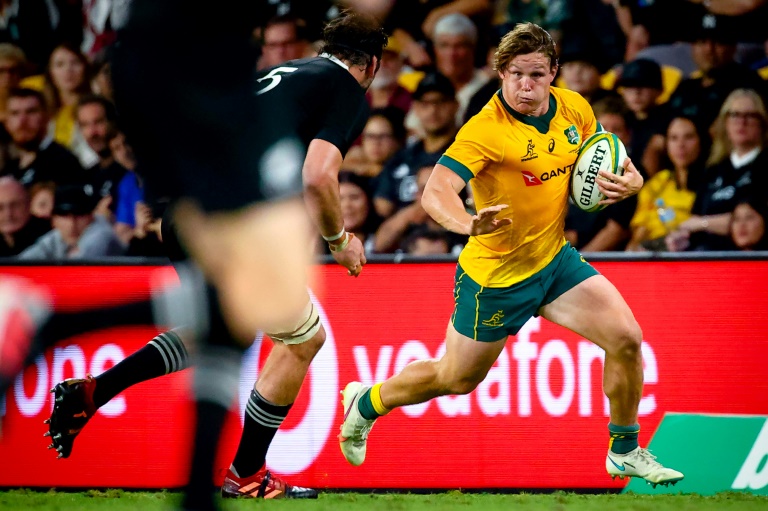 Michael Hooper will captain the Wallabies against France. AFP/Patrick Hamilton

The Wallabies will face Les Bleus in three Tests beginning in Sydney on July 7 before moving to Melbourne and Brisbane on July 13 and 17.

Coach Dave Rennie said the squad, all of whom are Australia-based, was picked on "form and potential".

"I know the whole group is really excited to get stuck in and push their case for a Wallaby jersey against France," he said.

"Obviously the squad is a bit bigger than what we would normally have but we had to consider how we will handle the rigours of the series."

Flanker Hooper, a 105-Test veteran, was reaffirmed as captain after returning from a stint with Japanese side Toyota Verblitz.

"It's a good balance between the young and the old," he said, with the likes of James Slipper, James O'Connor, Scott Sio and Matt To'omua adding experience. "There's plenty of opportunity there and spots up for grabs."

Among the 11 uncapped players are former Junior Wallabies hooker Lachlan Lonergan, who has impressed with the ACT Brumbies this season, along with Western Force hooker Feleti Kaitu'u and Melbourne Rebels back-rower Rob Leota.

Lock Matt Philip makes a return after finishing up with French club Pau, while Timani at 34 is the oldest.

He incredibly is back in contention for the first time since facing Scotland in 2013 after returning to Australia and the Western Force last year following a long stint in France with Montpellier and ASM Clermont.

Among those missing out were experienced pair, backrower Pete Samu and hooker Folau Fainga'a, and Queensland Reds skipper Liam Wright.

The Wallabies, dominated by Brumbies players, head into the series after their shortcomings were brutally exposed by New Zealand sides in the trans-Tasman Super Rugby competition.

Hooper said lessons must be learned after Australian teams won just two of the 25 matches they played.

"I think it would be foolish to forget about some of the learnings our guys would have had," he said.

"The next few weeks is going to be about trying to get down to the nitty gritty of how these (French) guys play, which by all reports is outstanding," he added.

France, who must isolate for 14 days on arrival in Australia, will be missing captain Charles Ollivon, who tore a cruciate ligament during a Top 14 clash for Toulon this month.

Coach Fabien Galthie will also be without players featuring in June 25's Top 14 final for the opening game of the tour due to the quarantine rules in Australia.

The Wallabies won the last meeting between the two sides in November 2016.