WATCH: Exhausted kangaroo cools down in pool as bushfires rage 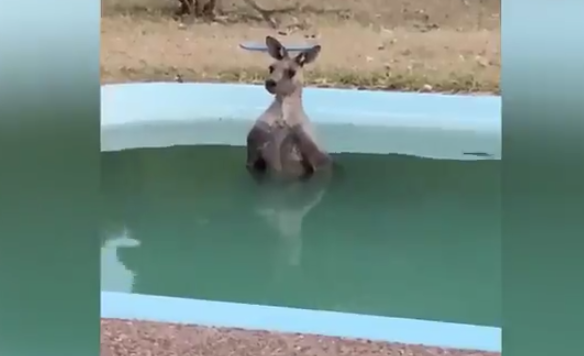 The kangaroo, which was filmed in water up to its chest, flapped its ears and appeared unharmed.

SYDNEY - A kangaroo has been spotted cooling off in backyard pool in a bush fire-ravaged region of Australia while elsewhere firefighters have been rescuing koalas from trees threatened by flames.

Australia's wildlife has been hard hit by fires that have destroyed more than 3.7 million hectares of bushland and killed six people.

With scorching heat and fire conditions expected to worsen, animal sanctuaries and rescue organisations have to decide whether to try to evacuate threatened areas or risk staying to try to protect the animals.

Some koala and flying fox populations have been destroyed while kangaroos, koalas and echidnas have been spotted seeking shelter in urban areas.

While not known for their swimming skills, kangaroos do seek bodies of water in intense heat, though usually in the wild.

A family in the upper Hunter region of New South Wales filmed a 70kg kangaroo taking a dip in their swimming pool at the weekend as temperatures topped 42 Celsius.

The kangaroo, which was filmed in water up to its chest, flapped its ears and appeared unharmed.

"The thermometer under the back veranda got to 48.9C today, not an official reading obviously, but it was enough to kill these sulphur-crested cockatoos," he wrote.

While protecting homes in South Australia, a fire crew rescued koalas from gumtrees in the path of the fire.

In New South Wales, an environmental group estimated more than 2,000 koalas had been killed as one third of their habitat burned.

A wildlife sanctuary north of Sydney evacuated its 300 animals as the flames approached.

"We decided to evacuate and were lucky to escape the fires," said Tassin Barnard, operations manager of the Walkabout Wildlife Park.

While there are no official statistics, Barnard said it was likely that millions of animals had been killed.

"Other sanctuaries have decided not to move their animals and just to do their best to defend them and I understand that too because it is extremely difficult to do," Barnard said.