CAPE TOWN - The Western Cape is one province which doesn't follow election trends.

Since the dawn of democracy, the Western Cape is the province where anything can happen and the one that is keenly watched.

This time around, there is even more at stake for the governing Democratic Alliance.

Political analyst Cherrel Africa says voter behaviour in the Western Cape must also be viewed in the context of loyalty.

“Surveys since 1994, voters have lower level of party identification and party loyal, more open to persuasion, they observe events at both national and provincial level.”

READ: The race for Gauteng to be hotly contested

The ANC's best performance in the province was the 44-percent of the vote it garnered in 2004 which put it in charge for the first and only time since 1994.

"It's very difficult for them to break beyond 30-40 percent,” Africa said.

Since then, however, the party has suffered significant reputational damage over its public fallout with former Cape Town mayor Patricia de Lille and its handling of the drought.

WATCH: All systems go as South Africans head to the polls

Despite denials from the ANC, pre-election polling by MarkData suggests that a coalition between the ANC and EFF could be in the offing - a real fear for the DA.

A fledgling party at the last election, the EFF mustered only two-percent of the vote in the Western Cape.

With its rhetoric of free education, jobs and land, its support appears to have grown among the youth.

But Africa doesn't believe the EFF's aggressive style of politics will appeal to the average disgruntled Western Cape voter.

Rather, she thinks Patricia de Lille's Good Party will be a more attractive choice for an undecided voter.

eNCA reporter Lindsay Dentlinger takes a look at the odds. 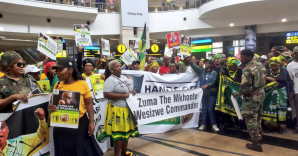