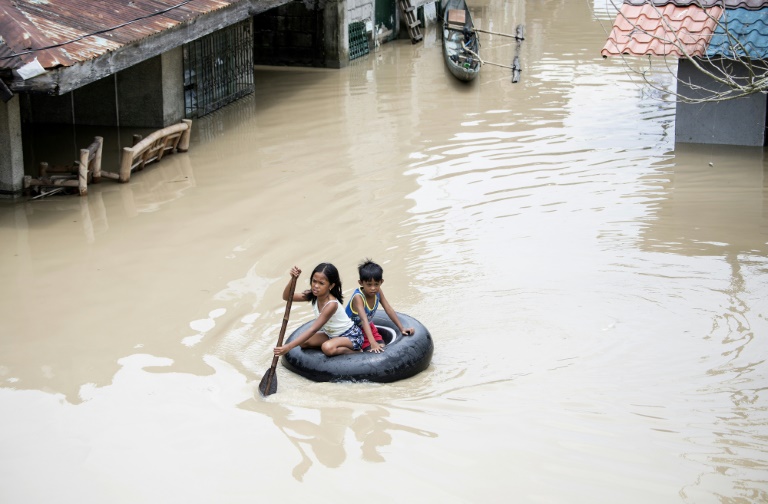 In a world that heats two degrees above preindustrial levels, land currently inhabited by 700 million people would regularly be inundated by high tides

PARIS - Even if humanity beats the odds and caps global warming at 1.5 degrees Celsius above preindustrial levels, seas will rise for centuries to come and swamp cities currently home to half-a-billion people, researchers warned Tuesday.

In a world that heats up another half-degree above that benchmark, an additional 200 million of today's urban dwellers would regularly find themselves knee-deep in sea water and more vulnerable to devastating storm surges, they reported in Environmental Research Letters.

Worst hit in any scenario will be Asia, which accounts for nine of the ten mega-cities at highest risk.

Land home to more than half the populations of Bangladesh and Vietnam fall below the long-term high tide line, even in a 2C world.

Most projections for sea level rise and the threat it poses to shoreline cities run to the end of the century and range from half-a-metre to less than twice that, depending how quickly carbon pollution is reduced.

But oceans will continue to swell for hundreds of years beyond 2100 -- fed by melting ice sheets, heat trapped in the ocean and the dynamics of warming water -- no matter how aggressively greenhouse gas emissions are drawn down, the findings show.

"Roughly five percent of the world's population today live on land below where the high tide level is expected to rise based on carbon dioxide that human activity has already added to the atmosphere," lead author Ben Strauss, CEO and chief scientist of Climate Central, told AFP.

Today's concentration of CO2 -- which lingers for hundreds of years -- is 50 percent higher than in 1800, and Earth's average surface temperature has already risen 1.1C. 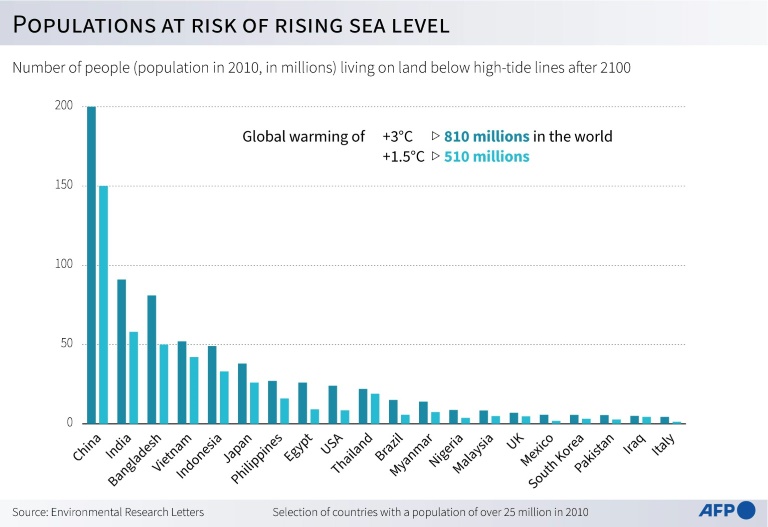 Number of people living in zones that could be underwater due to rising sea levels, after 2100

The 1.5C warming limit enshrined in the Paris Agreement that nations will try to keep in play at the COP26 climate summit in Glasgow next month translates into nearly three metres over the long haul.

Unless engineers figure out how to quickly remove massive amounts of CO2 from the atmosphere, that amount of sea level rise is not a matter of "if" but "when", according to the study.

These are the optimistic scenarios.

"The headline finding for me is the stark difference between a 1.5C world after sharp pollution cuts versus a world after 3C or 4C of warming," Strauss said.

"At Glasgow and for the rest of this decade, we have the chance to help or to betray a hundred generations to come."

National carbon-cutting pledges under the 2015 Paris treaty would, if honoured, still see Earth warm 2.7C by 2100. If efforts to reign in greenhouse gases falter, temperatures could rise 4C or more above mid-19th century levels.

This much warming would add six to nine metres to global oceans over the long haul, and force cities currently home to nearly a billion people to either mount massive defences against future sea level rise or rebuild on higher ground. 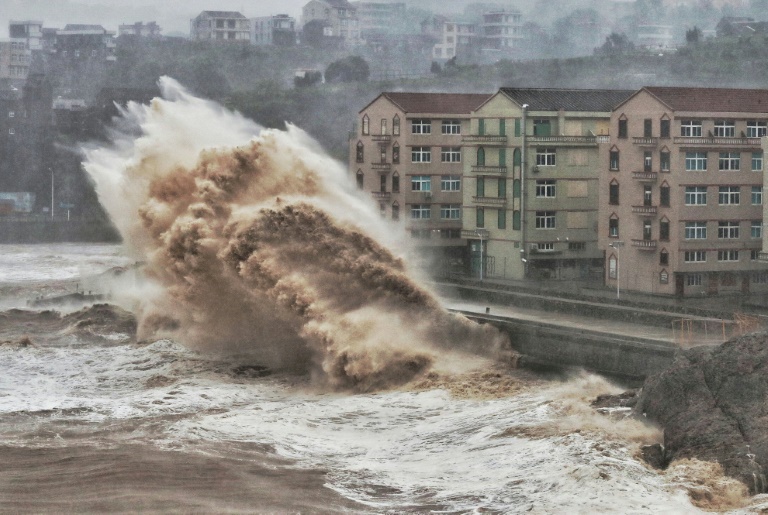 In China alone, land occupied today by 200 million people would fall below high tide in a 3C scenario

In China alone, land occupied today by 200 million people would fall below high tide in a 3C scenario. And the threat is not only long-term: absent massive sea walls, Chinese cityscapes home to tens of millions could become unliveable within 80 years.

"1.5C of warming will still lead to devastating sea-level rise, but the hotter alternatives are far worse," said Strauss.

"We're in bad shape but it is never too late to do better, and the difference we could make is enormous."

At higher levels of warming, the danger increases substantially of triggering the irreversible disintegration of ice sheets or the release of natural stores of CO2 and methane in permafrost, scientists warn.

Capping global warming as low as possible also buys us time to adapt.

"It is almost certain that seas will rise more slowly in a 1.5C or 2C warmer world," Strauss said.

Researchers from Princeton University and the Potsdam Institute for Climate Impact Research in Germany contributed to the study.