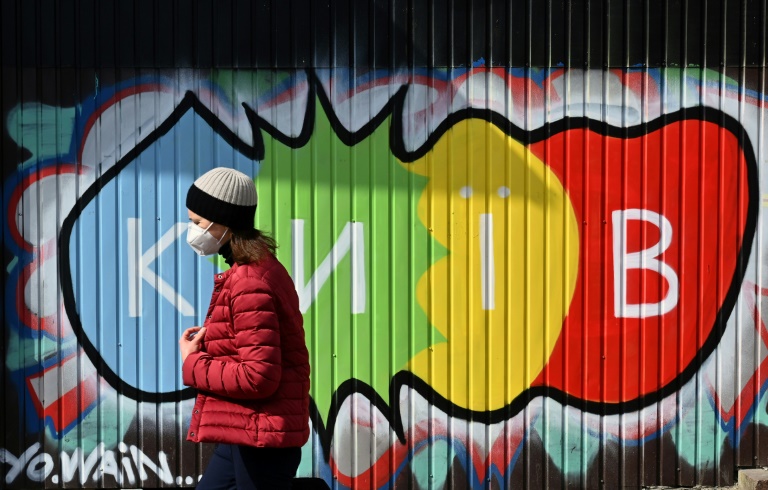 A woman wearing a protective face mask walks in front of a graffiti reading "Kiev" during a warm spring day in the Ukrainian capital on April 1, 2021, amid the ongoing coronavirus disease pandemic

PARIS - The WHO on Thursday slammed Europe's "unacceptably slow" vaccine rollout, warning of a worrying surge in cases as France became the latest country to impose new restrictions to combat mounting infections.

As European nations scrambled to contain third waves across the continent, Brazil marked a grim milestone with more than 66,000 deaths in March -- by far the highest since the beginning of the pandemic.

On the vaccine front, there was a glimmer of hope as Pfizer/BioNTech said their jab was highly effective against the South African variant, and Israel vowed to inoculate children after promising trial data among youngsters.

Governments are hoping vaccines will be the route to a return to normal more than a year into the pandemic that has now killed more than 2.8 million people and subjected much of humanity to punishing restrictions. 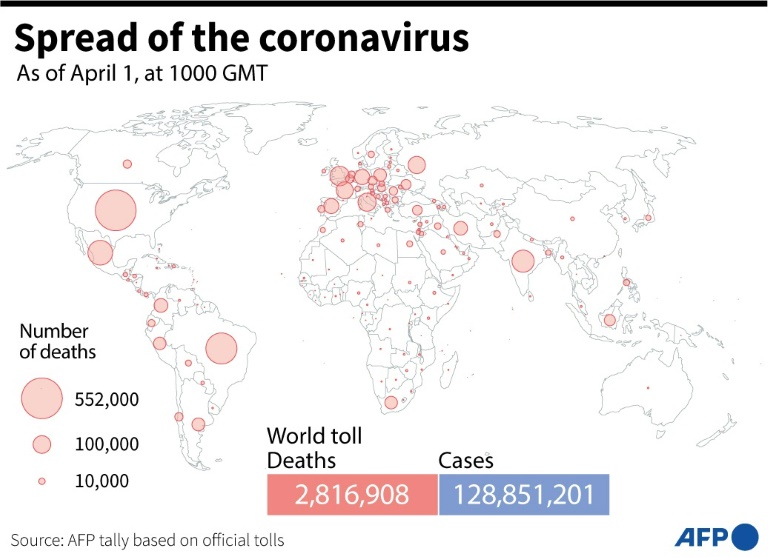 But Europe has struggled with its vaccine drive, and the World Health Organization (WHO) said Thursday the sluggish pace is prolonging the pandemic.

READ: Discovery in talks with government over vaccination rollout

"Vaccines present our best way out of this pandemic... however, the rollout of these vaccines is unacceptably slow," said WHO director for Europe Hans Kluge.

"We must speed up the process by ramping up manufacturing, reducing barriers to administering vaccines, and using every single vial we have in stock."

The EU has blamed supply problems on its sluggish rollout, but several nations are also facing high rates of vaccine hesitancy, even in the face of rising infections. 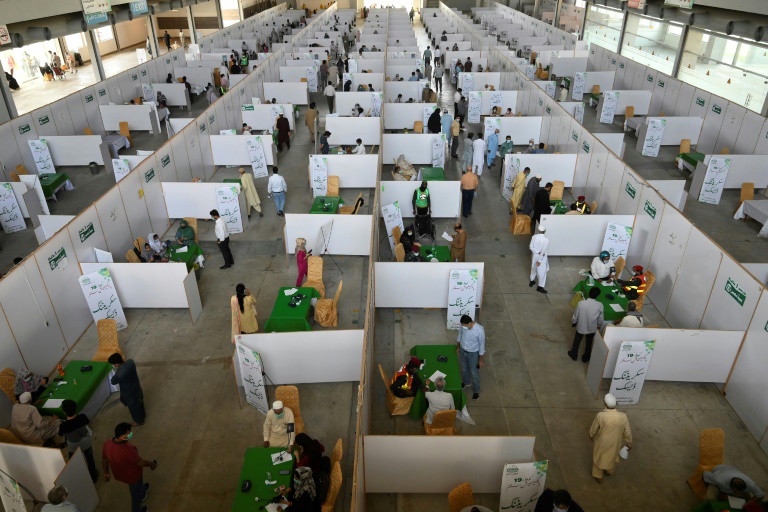 A vaccine centre in Lahore, India

By comparison, world leader Israel has already given two shots to more than half of its population, while in the US close to 16 percent of the population has received both.

Israel said Thursday it plans to expand its vaccine campaign to children aged 12 to 15 from May, after a study showed its efficacy for the age group. 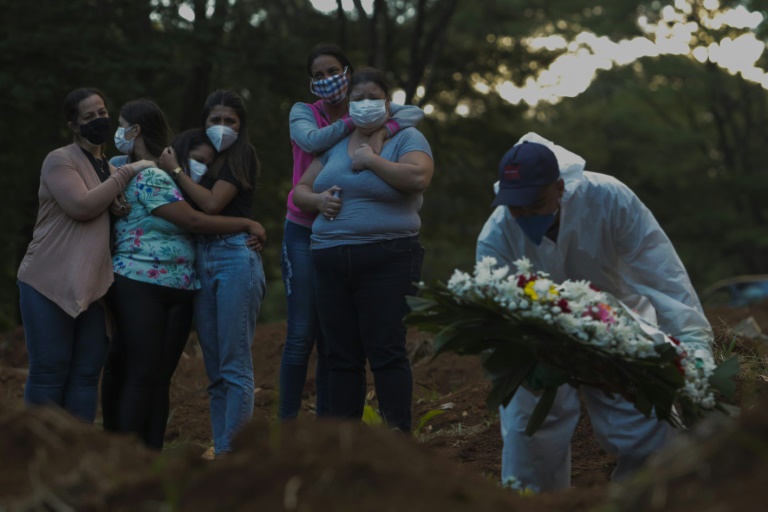 A family buries a relative who dies of Covid at a cemetery in Sao Paulo, Brazil on March 31, 2021

It is using jabs from Pfizer/BioNTech, which on Thursday released promising new data showing it was highly effective against the South African variant of the virus that has ravaged that country.

No cases of the disease were observed in South Africa during a phase-three trial study among participants who had received a second dose, the companies said.

But as some nations looked to a post-pandemic reality, others were mired in fresh anti-virus measures.

A surge of infections in France forced President Emmanuel Macron to reimpose nationwide restrictions he rejected in January. 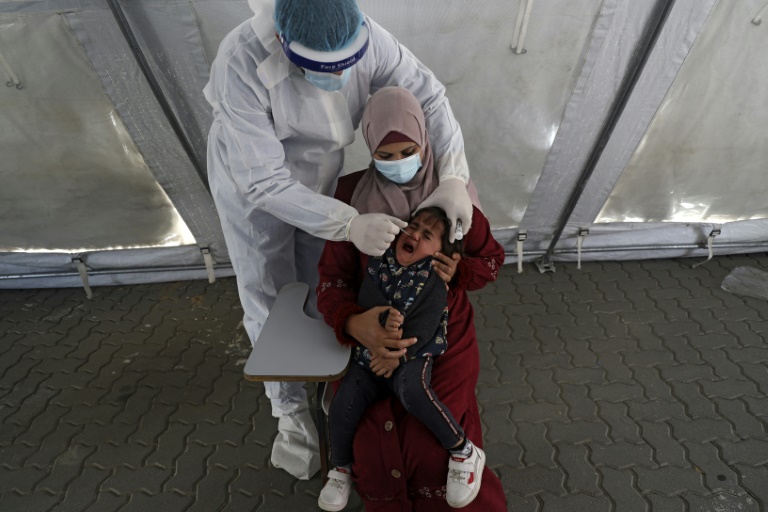 A Palestinian health worker administers a Covid test on April 1, 2021

"We gained precious weeks of liberty," he said in a national address late Wednesday, but the current measures "were too limited at a time when the epidemic is accelerating".

The limited lockdown already in place in regions, including Paris, would be extended to the whole country from Saturday night for the next four weeks, he said.

Schools will close for three or four weeks depending on age level, and alcoholic drinks will be prohibited in parks and other outdoor public spaces.

For some parents, the new rules were unwelcome -- but deemed essential.

"It was absolutely necessary to close the schools, even if it will be complicated for parents, and especially young children, to manage this situation," said Laure, a 44-year-old researcher with two young boys in Paris.

In hard-hit Brazil, where President Jair Bolsonaro has been rocked by a political crisis over his handling of the pandemic, death rates last month hit an alarming high.

Officials said a staggering 66,500 people died of Covid-19 in the country in March -- more than twice as many fatalities as the country's second-deadliest month of the pandemic, July 2020.

At a field hospital in the suburbs of Sao Paulo, one doctor said she is alarmed at how the virus has swept the country -- no longer just targeting the elderly and vulnerable. 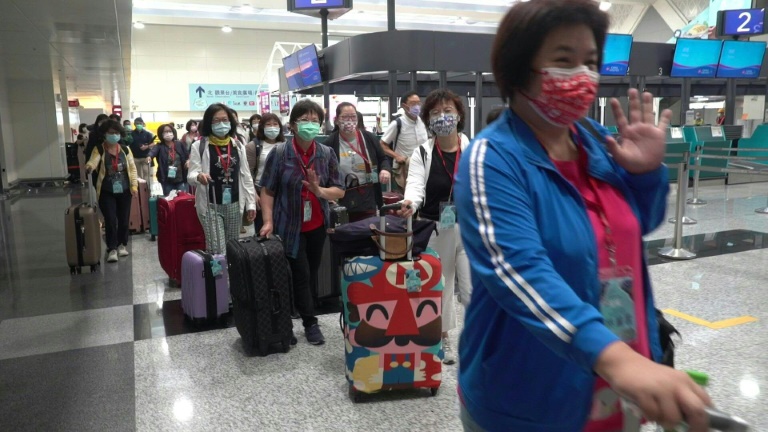 She said she has been frustrated to see many of her compatriots ignore face masks and social distancing guidelines and even flood to underground parties.

"I see no difference in people's behaviour. People don't seem to understand the magnitude of this," she said.

Elsewhere, there was evidence of a return to normal as Taiwan and Palau launched a holiday travel bubble to kickstart their battered tourist industries.

Around 100 excited Taiwanese tourists arrived at Taoyuan international airport near Taipei on Thursday, checking in five hours before their afternoon flight to get tested for the coronavirus.

"I am really excited but also feeling a bit sentimental because it's been a long, long time since I last went abroad," tourist Andy Yang told AFP.