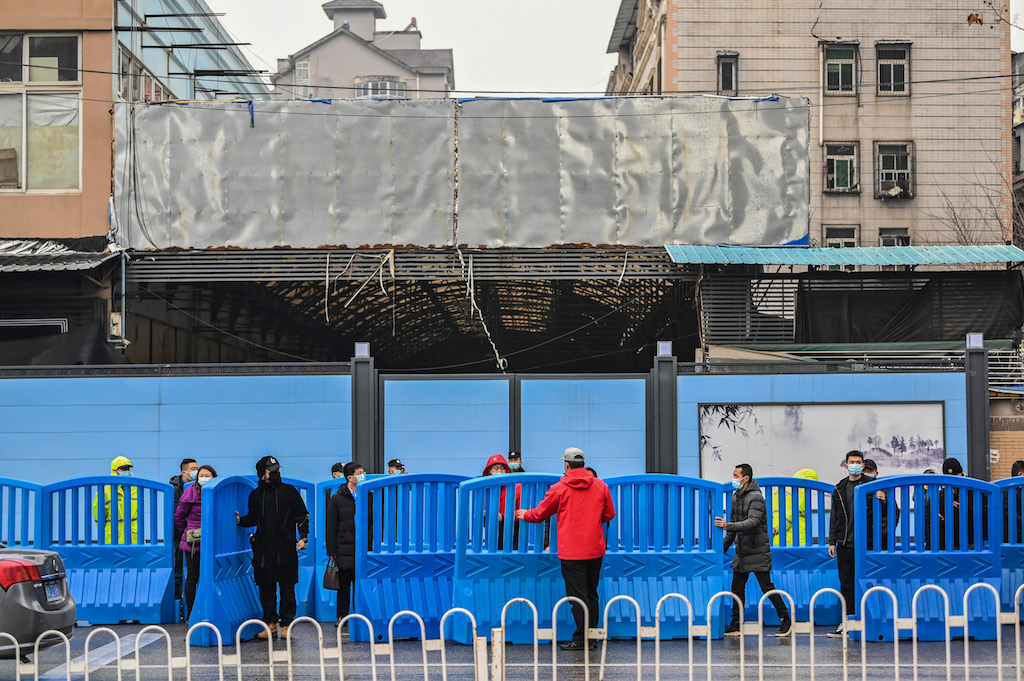 Workers place barriers outside the closed Huanan Seafood wholesale market during a visit by members of the World Health Organization (WHO) team, investigating the origins of the Covid-19 coronavirus, in Wuhan, China's central Hubei province on January 31, 2021.

WUHAN - A team of WHO experts investigating the origins of Covid-19 visited a market in Wuhan on Sunday where one of the first reported clusters of infections emerged over a year ago.

Members of the group arrived at Huanan seafood market - which has been sealed since January last year - driving into its barricaded premises as guards quickly blocked others from entering, according to AFP journalists at the scene.

The mission, delayed by China and weighed down by political baggage, has a remit to explore how the virus jumped from animal to human.

But with the fieldwork element of the trip in its early stages, World Health Organization officials have already downplayed expectations of finding the source of a virus which has killed over two million people and devastated the global economy.

On Sunday, the WHO team arrived at the Huanan market as part of a long-planned trip now closely monitored by the Chinese authorities.

The experts did not take any questions, and a member of the team shrugged and rolled up the car window when asked about his expectations for the visit.

Security staff told reporters outside to leave and shook a tall ladder on which a photographer was sitting for a better view.

Later, in response to a shouted question on whether the experts were satisfied with access given, a member of the mission gave a thumbs-up.

Earlier this week, state media outlet Global Times published a report downplaying the importance of Huanan as an early epicenter of the virus, claiming "subsequent investigations" have suggested the market was not the source of the outbreak.

On Sunday, the tabloid argued that "the possibility that the coronavirus was passed on from cold-chain products into Wuhan, or more specifically, to the Huanan wet market... cannot be ruled out".

Chinese officials identified wild animals sold in the market as a likely source of the outbreak in the initial stages of the pandemic, clamping down on the exotic animal trade in response.

A price list issued by a merchant at the emporium, which circulated online, showed an array of exotic wildlife available including civets, snakes and even live wolf pups.

Since then, state media have thrown support behind suggestions that the virus may have originated elsewhere, with a resurgence of local infections blamed instead on imports.

On Sunday morning, WHO's expert team visited another site in Wuhan, the massive Baishazhou wholesale market, where business plunged after the outbreak.

Chinese authorities have relentlessly pushed a positive narrative of heroism and decisive action in their fight against the coronavirus that has spurred an economic recovery and kept deaths down to 4,636.

READ: One year after lockdown, Wuhan clubbers hit the dancefloor

On Saturday, the WHO experts' itinerary included a propaganda exhibition in Wuhan lauding the emergency response of the city's health authorities in the outbreak and the marshalling of the crisis by China's leader Xi Jinping.

China has faced criticism at home and abroad for downplaying the initial outbreak and concealing information when it first emerged in Wuhan in December 2019.

Details of the WHO team's itinerary have remained thin, with international media kept firmly at arm's length -- the only glimpses of the trip have come through broadly positive tweets by some members of the expert team.

China continues to take a firm line against a recent surge in infections, with 12 officials in northeastern Harbin city recently punished for dereliction of duty after a cluster of cases in a food processing company.