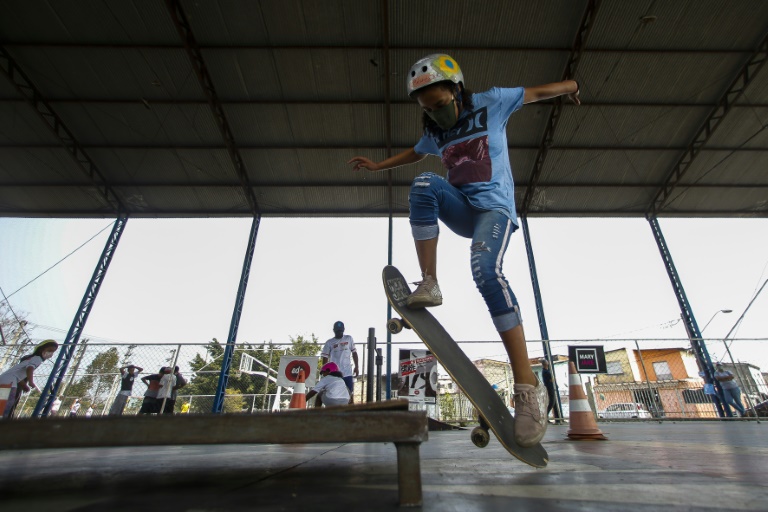 Young girls are embracing skateboarding in Brazil in the wake of the silver medal Olympic performance by their compatriot Rayssa Leal, at age 13. AFP/Miguel Schincariol

SAO PAULO - When she saw 13-year-old Brazilian Rayssa Leal win silver in the first-ever street skateboarding competition at the Summer Olympics in Tokyo, Giovanna Alves Farias only had one wish: To start flying around a skate park herself.

"I nearly cried. Seeing a 13-year-old girl like me win a medal was so unexpected!" Giovanna told AFP. "Before the Games, I was already interested in skateboarding, but after seeing that, I told my dad: 'Let's go!'"

Leal's success is fueling a boom in skateboarding -- long a sport dominated by men -- among women and girls in Brazil, who see themselves soaring to new heights, maybe even at the Olympics.

Right after the Olympics ended in Tokyo, the teen started to test out her abilities at a park in Sao Bernardo do Campo, near the mega-city of Sao Paulo.

Ana Clara Agostinni, who is only 12, had already been working on her skateboarding tricks for some time, but the frenzy around Leal -- known as the "Little Fairy" -- kickstarted her desire to put her skills to the test in competition. 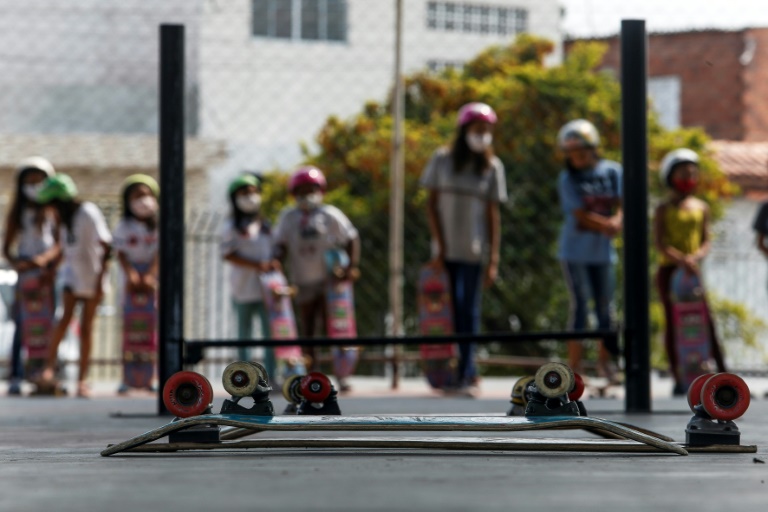 Young girls in Poa, a suburb of Sao Paulo, get ready to take their turn skateboarding. AFP/Miguel Schincariol

"I am thinking about what it would be like to take part in the Olympics, and I am training," she said.

Clad in her helmet and wrist guards, Ana Clara admits she is also looking for the adrenaline rush that hurling herself off obstacles in the park gives her.

"I love the feeling of going fast and going higher and higher, so I get more confident and try some new tricks," she says. 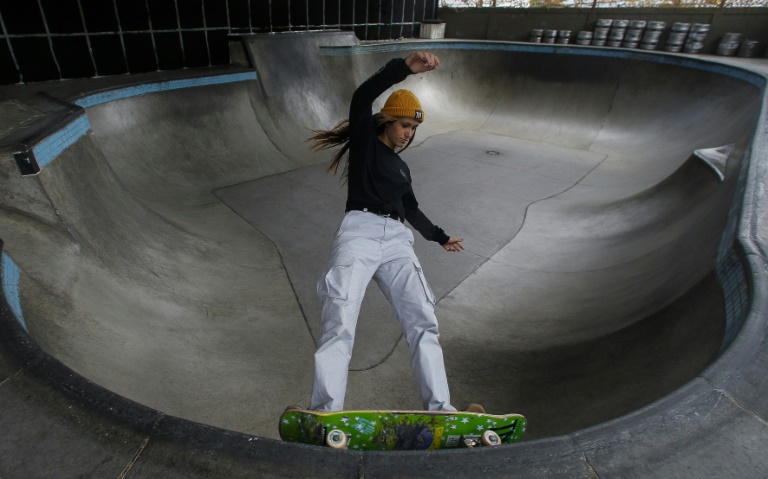 Brazilian skateboarder Dora Varella, who was on the Olympic team in Tokyo, says seeing all the young girls take up the sport is rewarding. AFP/Miguel Schincariol

Leal first jumped to viral fame at the age of seven, thanks to a video of her doing skateboarding tricks dressed as Tinker Bell from the Peter Pan's children stories.

Julia de Souza Lima Martins, who is eight, wants to follow in her footsteps.

"My aunt recorded the Olympics, I watched the competition and I'm trying to imitate the tricks," Julia says at the Sao Bernardo do Campo park with a smile. Her helmet is bubble gum pink.

For 20-year-old Dora Varella, another member of Brazil's Olympic skateboarding team in Tokyo, seeing more and more young girls take up the sport has been one of the greatest rewards.

"When we came back from Japan, I saw there was a real bump in interest in skateboarding, and I said to myself: 'Mission accomplished!'" 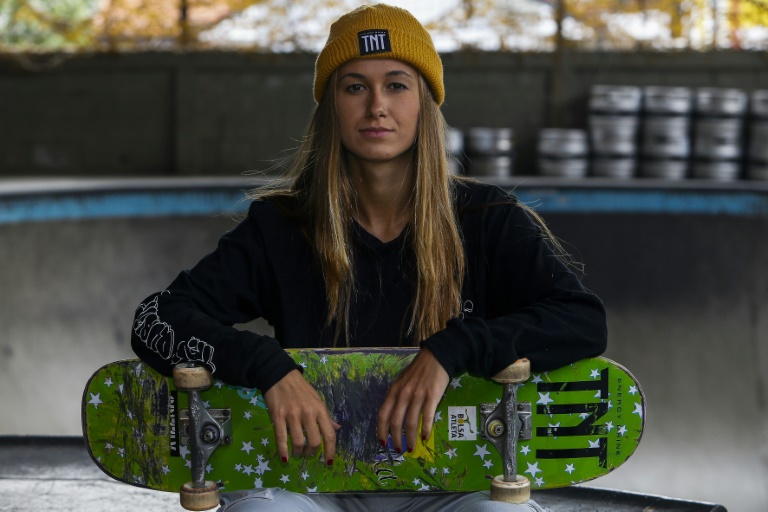 Dora Varella was one of the only girls at the skate park when she started 10 years ago. AFP/Miguel Schincariol

"There are more and more skateboarding classes for small kids and I see there are often more girls than boys. That's what is really awesome about the Olympics," added Varella, who is a professional.

When Varella started skateboarding 10 years ago, she was one of the only girls out on the ramp, but she says she never worried about it.

"In skateboarding, everyone shares the same passion. Whether you are five or 40, man or woman, we're all treated equally," she says. 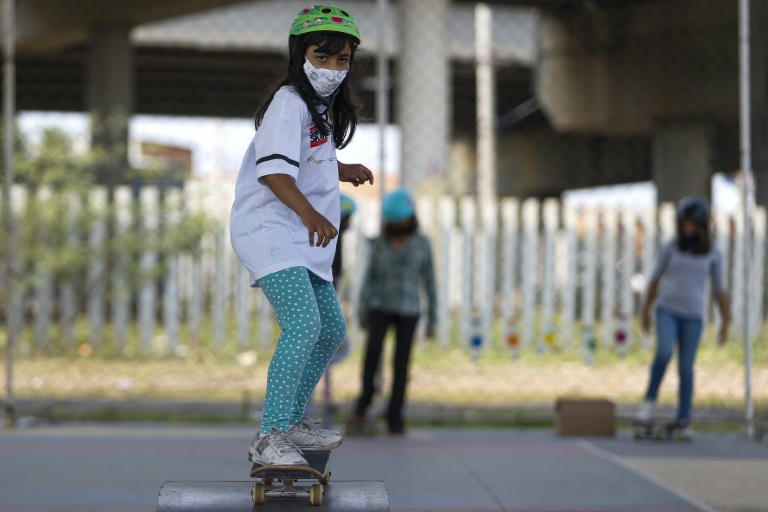 But male chauvinism was certainly alive and well in skateboarding in the past, according to 46-year-old Renata Paschini.

"When I was younger, boys said to me, 'Hey, look at the girl here bugging us' or 'the girl trying to pick us up'," she said.

In the 1980s, skateboarding was considered a sport for delinquents in Brazil, and was even banned at one point in Sao Paulo by city officials.

"I come from a very traditional family and I ran the risk of dishonoring them if they found out I was skateboarding. I had to hide my board in a backpack instead of carrying it under my arm," Paschini said.

In 2009, she created the Association for Women Skateboarders, which organized competitions for women and girls and made sure the Sao Bernardo do Campo skate park had hours reserved for women. 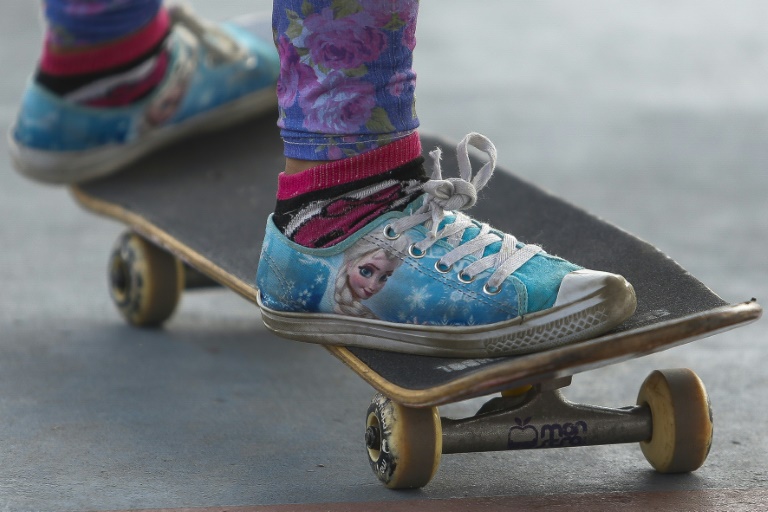 This young girl is wearing sneakers from the Disney movie "Frozen" as she skateboards. AFP/Miguel Schincariol

The sport also became an outlet for at-risk youth, such as those served by the non-governmental organization Social Skate, created in 2012 in Poa, a poor suburb of Sao Paulo.

"I'm devoting myself to training so I can go to the Olympics and do something good with my life," she says.

- by Fernando Marron and Lujan Scarpinelli