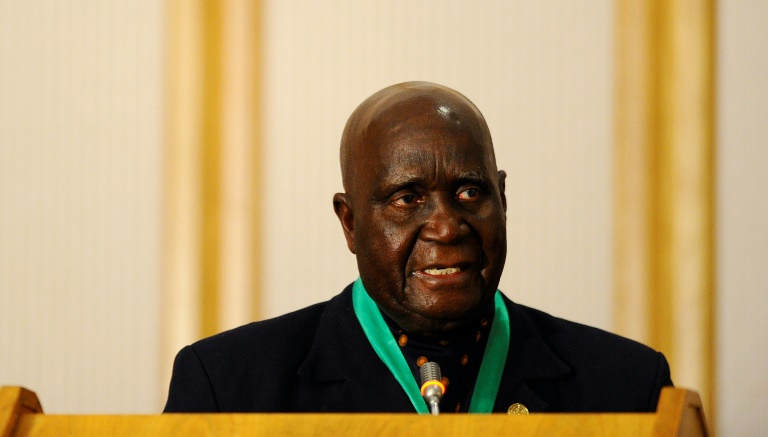 Kaunda, speaking at a southern African summit in 2011. Zambia's first post-independence president has been hospitalised, his office says

LUSAKA - Zambia's founding father and former president Kenneth Kaunda has been admitted to hospital for an undiclosed illness, his office said Monday.

In a terse statement, it said Kaunda, 97, "has been unwell and was admitted to... Maina Soko Medical Centre," a military hospital in the capital Lusaka. It gave no further details.

Kaunda ruled Zambia for 27 years, taking the helm after the country gained independence from Britain in October 1964.

The statement said Kaunda was asking Zambians and the international community to pray for him "as the medical team is doing everything possible to ensure that he recovers".

Kaunda, popularly known by his initials of KK, was head of the main nationalist party, the left-of-centre United National Independence Party (UNIP).

While in power he hosted many of the movements fighting for independence or black equality in other countries around the region, including South Africa's African National Congress (ANC).

Some nicknamed him "Africa's Gandhi" for his non-violent, independence-related activism in the 1960s.

But Kaunda's popularity at home waned as he became increasingly autocratic and banned all opposition parties.

He eventually ceded power in the first multi-party elections in 1991, losing to trade unionist Fredrick Chiluba.

In later life he regained stature as one of Africa's political giants, helping to mediate crises in Zimbabwe and Kenya.

He became an AIDS campaigner, announcing publicly at the peak of the pandemic that one of his sons had died from the illness.

He charmed mourners at Nelson Mandela's burial in December 2013.

When organisers attempted to usher him away from the podium after he ran over his allotted time, he drew laughs by saying they were "trying to control an old man who fought the Boers", or Afrikaners -- the white descendants of South Africa's first Dutch settlers.

President Edgar Lungu, in a Facebook post, called "the nation to prayer for our beloved KK that God may touch him with his healing hand".

"He stood up for the great nation at its most critical moment, and so we can stand up for him in his moment of weakness," said Lungu.