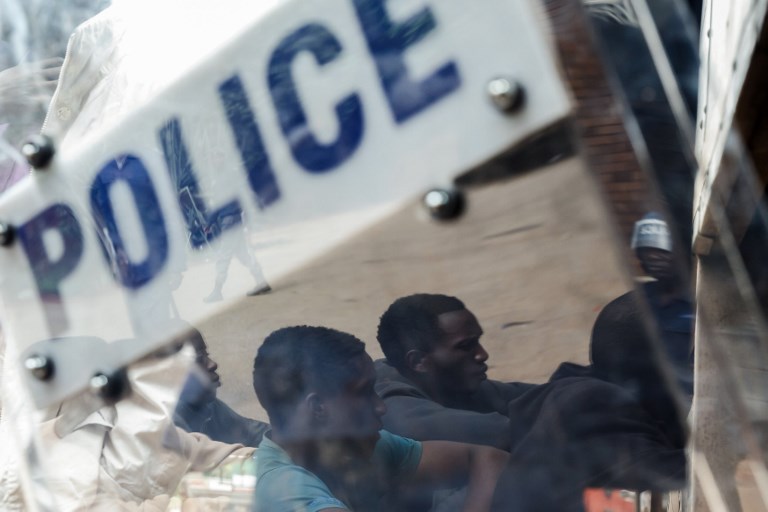 Zimbabwean anti-riot police forces watch men, arrested during violent protests triggered by a sudden rise in fuel prices announced by Zimbabwean President, for their hearing at the Law Court in the capital Harare, on January 16, 2019.

A crackdown by security forces has been fiercely criticised by the UN human rights office, with allegations of shootings, beatings and abductions of opposition figures, activists and ordinary residents.

But they largely disappeared after he was ousted by the military in November 2017 and succeeded by his former deputy Emmerson Mnangagwa.

"We want to tell members of the public that... we have already set up security checkpoints where police officers and other security institutions will be checking," police spokeswoman Charity Charamba told Saturday's state-owned Herald newspaper.

She said the checkpoints were to catch suspected looters and recover property stolen during protests that erupted after Mnangagwa last weekend announced a 150-percent increase in petrol prices.

The Herald said 700 people had been arrested after the violent protests, which it blamed on the opposition MDC party and trade unions.

Police checkpoints were in action on Saturday in the capital Harare and the second city Bulawayo, AFP reporters witnessed.

In both cities, customers seeking to stock up on basic goods tentatively returned to shops that opened for the first time since the protests started on Monday.

Long queues formed to buy bread and petrol, which are both in short supply due to Zimbabwe's long-burning economic crisis.

"Nothing has changed after the fuel price increase," said one motorist in a queue who identified himself only as Sonny.

Social media has been blocked by the government in an apparent attempt to suppress information about the security operation and alleged abuses.

The Zimbabwe Human Rights NGO Forum said it had recorded at least 12 deaths, 78 gunshot injuries and more than 240 incidents of assault and torture.

The United Nations human rights office on Friday urged Harare to "stop the crackdown", voicing alarm over the security forces' "excessive use of force" which included reports of them using live ammunition.

And it called on Zimbabwe's government "to find ways of engaging with the population about their legitimate grievances".