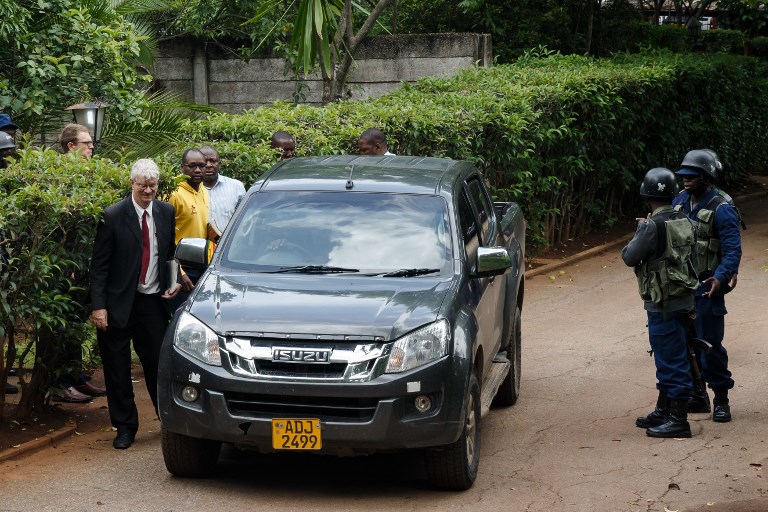 Zimbabwean cleric and activist Evan Mawarire (2nd L) is escorted to a car by Zimbabwean policemen on January 16, 2019, after he was picked up from his home in Avondale, Harare.

HARARE - Leading Zimbabwean activist Evan Mawarire was arrested by armed police at his home in Harare on Wednesday in a widening security crackdown after violent anti-government protests.

The nationwide protests were triggered by President Emmerson Mnangagwa's move to double fuel prices at the weekend as the country's economic crisis deepens.

"Armed police surrounded his residence," Teldah Mawarire, his sister, told AFP. "I was directly in contact with him until he was taken and he could no longer be online. We are very concerned."

Mawarire's lawyer Beatrice Mtetwa told reporters he had been taken to a city centre police station.

"He has been arrested, accused of inciting violence through social media," she told AFP.

A wave of protest erupted on Monday, prompting a security crackdown in which at least five people were shot dead, Human Rights Watch said.

Zimbabwe's mobile phone networks and the internet, which were partially shut down on Tuesday, were down for a second day on Wednesday.

Mnangagwa, 76, unveiled the fuel price hike in a televised address late on Saturday then left for an overseas trip.

"Resolving Zimbabwe's economic challenges is a monumental task... We are moving in the right direction. We will get there," Mnangagwa tweeted from Russia.

"I call for calm and peace from all of our brothers and sisters," he added in a message that few Zimbabweans could see due to the internet shutdown.

Police and soldiers have been accused of indiscriminately dragging people from their houses in Harare and beating them. About 200 people have been arrested.

Mawarire, a pastor, became a prominent voice during the protests of 2016 when he posted videos on social media criticising the government while wearing a Zimbabwean flag around his neck.

His posts inspired the ThisFlag movement that led mass protests against Robert Mugabe, the long-time president who was ousted in 2017 after a military takeover.

Mawarire, who was holding a Zimbabwean flag as he was taken away on Wednesday, has also been a fierce critic of Mnangagwa, Mugabe's successor.

Mnangagwa -- Mugabe's former deputy -- has claimed he represents a fresh start and has vowed to revive the shattered economy by attracting foreign investment.

But since his disputed election victory in July, the country has been hit by renewed shortages of fuel, bread, medicine and other daily essentials.

"Mnangagwa was not able to engineer any sort of economic recovery, so he hasn't been able to open up political space," Derek Matyszak, a Harare-based analyst at the Institute for Security Studies, told AFP.

"Investment he was hoping for has not materialised. The economic mess is unsolvable in the short term, so the administration is reacting in the way ZANU-PF knows best -- with a very heavy hand.

"The biggest signal of the return of repressive policies of Mugabe is the shutdown of internet. They obviously have no qualms about how the international community sees them."

Zimbabwe's economy has been in ruins since hyperinflation wiped out savings between 2007 and 2009, when the Zimbabwean dollar was abandoned in favour of the US dollar.

Official inflation is at 31 percent though many say the real rate is far higher.

Long queues lasting hours or even days form outside petrol stations and banks, where both fuel and cash are rationed.

With US dollar notes scarce, Zimbabweans are forced to withdraw "bond notes" -- supposedly equal to US dollars but worth far less in reality.

Mugabe, now 94, was ousted in November 2017 when the military, fearing that his wife Grace was being lined up to succeed him, seized control and forced him to resign.