Africa Check: Virginity testing 'sacred' but not a science 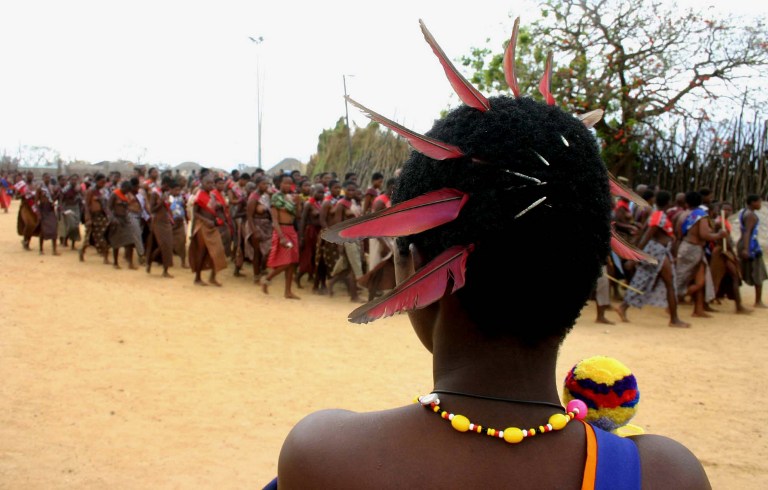 A young maiden is photographed standing opposite a choir of maidens during a Reed Dance ceremony in Swaziland.

An academic bursary awarded to young women who can prove that they are virgins has sparked debate in South Africa. What is virginity and is it possible to test for that? Africa Check sought medical advice.

When a KwaZulu-Natal municipality introduced an academic bursary for young women who can prove that they are virgins it caused an uproar earlier this year.

Politicians and women’s groups questioned the bursary’s requirement, claiming it to be unconstitutional. The South African Human Rights Commission has reportedly now opened an investigation into the bursary.

The practice of virginity testing has always been contentious, with several calls to ban it over the years. While traditionalists value it as a part of their culture and see it as necessary especially in the era of HIV/Aids in South Africa, human and women’s rights groups consider it archaic and a violation of young women.

Each time, the same questions arise. How is virginity inspection conducted and by whom? Is it even possible to know if a woman is a virgin or not?

Submitting a certificate of maidenhood

Mayor of the UuThukela district municipality in KwaZulu-Natal Dudu Mazibuko told Africa Check that their municipality was awarding “maiden bursaries” to academically deserving young women from the uThukela community to study at university.

She said that the academic and financial criteria were the same as the other bursaries they provide, except that for the maiden bursary, each interested young woman had to produce a certificate that proved she was a virgin.

“It is the matrons in their community who inspect them and they are given a certificate to confirm they are still maidens,” said Mazibuko.

Mazibuko added that the bursary scheme is applied for annually, so if a woman wants to reapply in 2017, she will have to provide another certificate to prove that she is still a virgin.

Preserving the ‘purity’ of Zulu girls

Virginity testing in South Africa is common in Zulu culture. It is an old religious practice that, according to sangoma and founder of the Nomkhubulwane Culture and Youth Development Organisation in Pietermaritzburg Nomagugu Ngobese, was revived in the early 1990s.

Ngobese, who conducts virginity inspections in communities around KwaZulu-Natal, told Africa Check that the ritual is meant to preserve the “purity” of young Zulu girls and women.

When asked how they conduct virginity inspection, Ngobese told Africa Check that the knowledge is “sacred to us. We do not want to unlock things that are so sacred to us”. She only divulged that “we do it practically with gloves and icansi (grass mat)”. After the testing, the girls that are “pure” are given certificates to prove their status as virgins, Ngobese said.

Inspections are conducted by women in their communities who specialise in virginity inspection, Ngobese added, and the form of inspection they practise is based on indigenous knowledge within the Zulu tradition.

“Old women always teach the young ones how to inspect,” she said.

Firm buttocks and breasts as a sign of virginity

Social anthropologist Dr Fiona Scorgie, now a senior researcher at the Wits Reproductive Health and HIV Institute, hasconducted research into the practice of virginity inspection in communities in KwaZulu-Natal. She told Africa Check that in these communities virginity “is usually defined as the state of not having had penetrative, vaginal sexual intercourse before”.

According to her paper Virginity Testing and the Politics of Sexual Responsibility: Implications for AIDS Intervention, there are a number of ways that virginity inspectors claim they can see if a girl or a woman has not had vaginal sexualintercourse. The women inspect the girls’ genitalia visually and sometimes use their fingers to expose the entranceto the vagina in order to see if the hymen is present.

Scorgie wrote: “They explain how it is the (ihlo) eye – sometimes translated as the hymen – that is inspected, and how this is said to be covered by a piece of flesh (the umhlumbi), the presence of which indicates that the girl is still a virgin.”

Other signs that show that a young woman is still a virgin, according to the inspectors, include tight muscle tone, firm buttocks and breasts and a flat abdomen. The inspectors also claim to be able “to identify whether a girl is a virgin or not simply by looking at her as she walks by”, Scorgie recorded.

A hierarchy of ‘purity’

To achieve an “A” grade “the color of the labia should be a very light pink, the size of the vaginalopening should be very small, the vagina should be very dry and tight, and the white dot or white lacy veil (hymen) should be clearly evident and intact”.  Additionally, the girl’s eyes should “look innocent” and she should have a firm body.

Those who are classified as “B” grade virgins have labia that “are a deeper shade of pink than thoseof the ‘A’ grade virgin, the vaginal opening slightly bigger, the vagina not so tight, and the vaginal walls slightly lubricated. The white dot and lacy veil are said to show evidence of ‘being disturbed’ ”. However, the testers are not clear as to what this exactly looks like, Leclerc-Madlala wrote.

Those awarded a “B” grade are thought to have had penetrative sex once or twice, or “may have been abused” but are still issued with a certificate. However, those who have been sexually abused repeatedly are more likely to be given a “C” grade.

Other young women who are relegated to the “C” grade have a “vagina that is ‘too wide and too wet’. No evidence of a white dot or veil can be found, and the girl’s eyes betray her as someone ‘who knows men’.”

Does every woman have a hymen?

Speaking to Africa Check, senior clinician at the Wits Reproductive Health and HIV Institute Dr Michelle Moorhouse said that medically, the definition of virginity in itself is not a strict one.

According to her, a dictionary definition would point to anyone, of any gender, who has not had sexual intercourse. However, this is also dependent on how one defines sexual intercourse since it is not limited to vaginal penetration.

Moorhouse told Africa Check that a hymen can be broken through exercise, insertion of tampons or even fingers. She added: “Some girls are born without a hymen or with so little hymen tissue that they appear to not have one. Often thehymen has disappeared by the time a girl reaches puberty. ”

It is also possible for a hymen to stay intact even after sexual intercourse that involves vaginal penetration, according to Moorhouse, adding that medically one cannot tell if someone is a virgin by how they walk, their muscle tone or simply looking at their labia.

In the journal article, Hymen: facts and conceptions, Professors Abdelmonem Hegazy from the faculty of medicine at Zagazig University in Egypt and Mohammed Al-Rukban from the College of Medicine at King Saud University in Saudi Arabia illustrated the different types of hymen that women. They noted: “The configuration of hymen differs dramatically from one female to another one.”

Hegazy and Al-Rukban also pointed out that the opening of the hymen can range in diameter “from pinpoint to one that admits the tip of one or even two fingers”.

Because of this range of difference in hymens between women, obstetrician and gynaecologist at the Donald Gordon Medical Centre in Johannesburg, Dr Trudy Smith told Africa Check that it is difficult to use it as a measure of virginity.

Conclusion: Virginity testing not a reliable way of determining virginity

While virginity testing is a traditional practice in Zulu culture, it is not an exact science. Examining the physical attributes or the vagina of a young woman is not a reliable way to determine virginity for a number of reasons.

Firstly, traditional testing relies on certain physical attributes such as “looking innocent” and muscle tone to prove virginity, which are very subjective forms of observation.

In the second place, the hymen is not a reliable indicator of virginity because it differs in each woman, is not present in every woman, can remain intact after penetrative sex and can be eroded over time due to physical activities or the insertion of tampons.

SOURCE: The article was originally published here: Virginity testing &39;sacred&39; but not a science - Africa Check