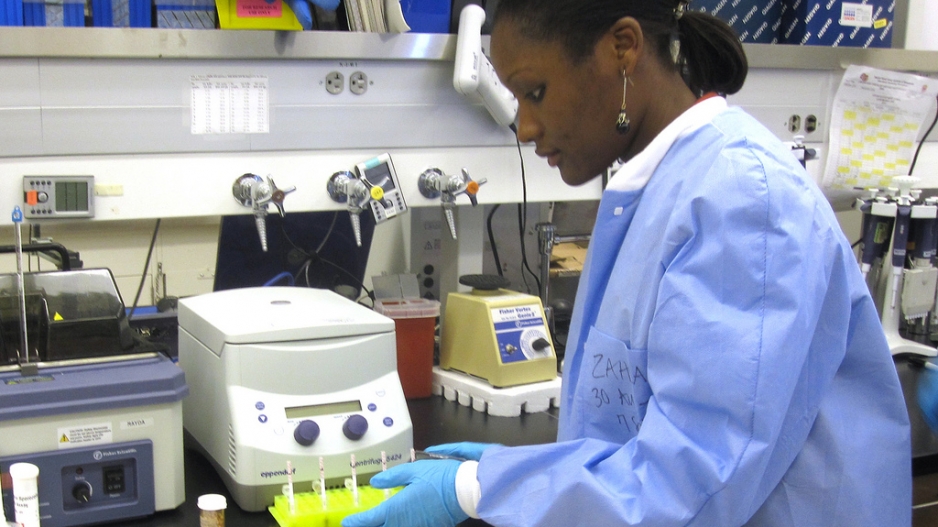 FILE image of a researcher in the bio lab at Walter Reed Army Institute of Research in Silver Spring, Md. USA

It’s still a man’s world in African science. The marginalisation of women in science is not unique, though, to the continent. It is a pattern around the globe. It has been estimated that, on average, only 30% of science roles throughout the world are held by women.

In the 114 years over which Nobel Prizes have been awarded, 47 women have received prizes, with 16 being honoured in what is termed the disciplinary areas of the awards (that is, not including literature and peace). Two of these prizes were in physics, five in chemistry, eight in physiology and medicine, and one in economics.

The Fields Medal, which is awarded to outstanding mathematicians under 40, has only once in the past 70 years been given to a woman, Maryam Mirzakhani, in 2014. The Abel Prize (instituted since 2003 for mathematicians) has never been won by a woman.

Few and far between

The reasons for the poor representation of women in science in Africa are a mixture of the barriers women face all over the world, combined with some added complexities.

Where data becomes available, it does not paint a positive picture. Only three of the 13 members of the council of the Academy of Science of South Africa (ASSAf) are women, although a woman leads the academy as its executive officer.

In most other academies of science across the continent, the norm is that there is one (or no) female council members. In April 2015, the University of Cape Town appointed chemical engineer Alison Lewis as the first female Dean of Engineering and the Built Environment in the 186-year old institution. She is only the second woman in South Africa to hold such a post.

The Association of African Women in Science and Engineering estimates that women make up no more than 20% of the academics in these fields in Africa. In South Africa, slightly fewer than 40% of scientists, engineers and technologists are women – and, as in the US, the figures are lower in the physical sciences. South Africa’s science statistics look a little better than the continent because it includes health sciences professionals.

In the US, women are also a minority. 46% of academics in science and engineering are women. The number is bolstered by the 16% in life sciences.

South Africa, at least, has a host of distinguished women scholars who, like Alison Lewis, are admirably suited to lead departments, faculties, universities, research foundations and institutes. Three of South Africa’s six world-leading researchers in their fields, as determined in 2014, are women.

This gloomy outlook may be attributed to at least four fundamental causes:

Sexism is still a major barrier to women. A recent review of an article submitted to open access science journal The Public Library of Science suggested that female authors find a man to work with if they wanted a paper to be accepted. This is just one example of blatant sexism. The journal’s editors either did not notice the reviewer’s comment or thought it reasonable – until the female authors drew it to world’s attention by tweeting the remark.

Overall, these factors ensure that it remains true that women remain the minority members of science and engineering disciplines in academia.

There is a strong case to be made for having more female scientists. Increasing women’s involvement, input and access to science and technology is essential to reducing poverty, creating job opportunities and increasing agricultural and industrial productivity. It is also key to tapping into human potential in rapidly changing areas and improving how we use technology, especially in the vital developmental areas of water resources management, food production and processing, and sanitation.

Some steps are being taken to remedy the disparity. The aim of one ASSAf project is to conduct a series of studies to highlight the role that women are playing in various aspects of science. Still in its infancy, the initiative also plans to look at how science and technology can support both women and men and promote the leadership of women.

The continent has a great deal to do to encourage women to take up careers in science, technology and innovation – starting from school level. First and foremost, attitudes towards girls and women need to change. Nearly 30 million girls on the continent between the ages of six and 15 are not in school, most of whom will never set foot in a classroom.

Getting women into the sciences is not possible unless we deal with this problem first.

This article is based on a leader piece written by the author in the May/June 2015 issue of the South African Journal of Science.

John Butler-Adam is Editor-in-Chief of the South African Journal of Science and Consultant, Vice Principal for Research and Graduate Education at University of Pretoria.