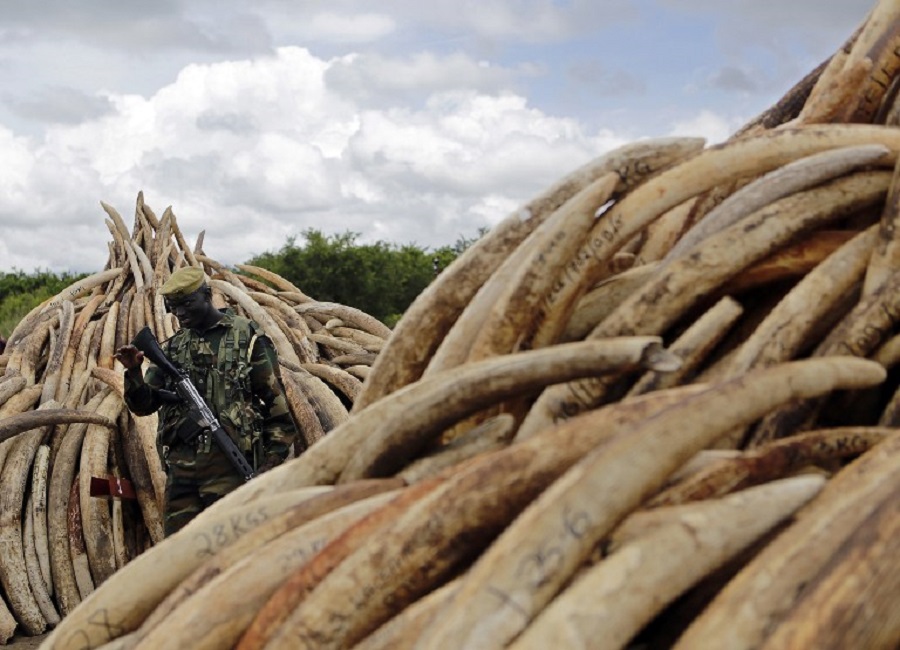 A Kenya Wildlife Services ranger gestures to visitors to maintain a recommended distance from illegal stockpiles of elephant tusks stacked up onto pyres at Nairobi's national park, on 28 April 2016, waiting to be burned with over a tonne of rhino horn.

Three countries in southern Africa have banded together to press for the ban on the international trade in ivory to be lifted. South Africa, Namibia and Zimbabwe have submitted a joint proposal to the Convention on International Trade in Endangered Species of Wild Fauna and Flora (CITES). They are asking for permission to trade in ivory without which, they argue, there are no positive incentives to conserve elephants or their habitats.

CITES is an international agreement between governments that aims to ensure that the trade in wild animals and plants does not threaten species’ survival. The next CITES Conference of the Parties in September will include debates about what levels of protection should be given to each species. One of the hottest topics will be the international ban on the trade of ivory, which was introduced in 1989.

The joint position of these southern African nations stands in direct opposition to the majority of African leaders who are deeply worried about the steep decline in elephant numbers. They recently formed the African Elephant Coalition.

The coalition, made up of 29 African countries, has put forward five proposals aimed at reversing the endemic poaching of African elephants. The thrust of their proposals is to end the ivory trade altogether.

The upcoming conference is set to be a firecracker political drama, given the conflicting proposals of the coalition and the southern Africa breakaway group.

Namibia, South Africa and Zimbabwe want an existing conference resolution to be amended to allow the international trade in raw ivory for commercial purposes to resume. The amendment suggests this decision should be authorised by the Standing Committee if certain criteria are met by the respective exporting and importing states.

In a more radical move, Namibia and Zimbabwe have also proposed that their elephants be removed from CITES protection listings altogether. If approved by the convention this would allow them to trade ivory by open auction. This is an unlikely outcome, as it requires a 66 percent majority. The other alternative is that the two countries elect to leave CITES.

Whatever the outcome, the actual tabling of these proposals runs the risk of sending the wrong signal to the ivory market: that trade may again be legitimate. This could undermine any stigma attached to the purchase of ivory.

Placing all elephants on the same list would accomplish two important goals.

But critics argue that the African Elephant Coalition’s proposal for uniform listing is strategically misplaced. The probability of all range states acceding is close to zero and it will divert attention away from other more important objectives.

The coalition also calls for the closure of domestic ivory markets. This is only logical. An international ban has been in place since 1989, but once illicit ivory has made its way through porous borders into legal domestic markets it is basically undetectable. Two once-off sales have been permitted by CITES since then – one in 1999 and one in 2008. While attributing causality is a tricky business, Nitin Sekar and Solomon Hsiang argue in a recent paper that the most recent sale coincided with an abrupt 66 percent increase in illegal ivory harvesting. The debate over the effect of these legalised sales is far from being resolved, but the close intertwining of the legal and illegal markets indicates that it has been risky at best.

Global domestic trade bans would simplify law enforcement. Officials would no longer have to incur the costs of trying to distinguish between legal and illegal ivory. Domestic bans would also reduce the hoarding of ivory in anticipation of future trade. In June the US implemented a rule that effectively bans their domestic ivory trade. China – the world’s largest consumer market – is also about to make its ivory market history.

To fortify the credibility of demand reduction campaigns, the African Elephant Coalition calls for existing stockpiles to be destroyed. Game theoretic analysis shows this is necessary in case consumers see stockpiles in range states as being for the purpose of a future trade.

Perhaps most importantly, the coalition proposal recommends that the conference should end negotiations on a “decision-making mechanism for a process of trade in ivory”. This is a direct refutation of the South African, Namibian and Zimbabwean proposal.

The effect of a ban on trade

Will legalising the trade in ivory stop poaching? Unlikely, argue some.

Pro-trade arguments tend to assume that legal supply would be provided to market at sufficient cost-competitiveness to crowd out illegal suppliers. But poaching syndicates have minimal capital and operational cost requirements in comparison with law enforcement agencies, which would be tasked with managing a legal trade.

It is unclear whether legalised trade mechanisms would be able to compete with poaching syndicates. This would create the problem of an illegal trade continuing in parallel with a legal trade, doing little to stem poaching.

More than that, pro-trade arguments tend to treat ivory as sufficiently renewable to satisfy demand. This is unreasonable. There just isn’t sufficient data to establish the validity of the assumption. The major risk is that if stockpiled ivory was released onto the market at scale, failed to reduce the price, but inadvertently triggered dormant demand, the price would actually rise. This would exacerbate rather than ameliorate poaching.

In light of this compelling scientific analysis, and the international community’s trajectory towards a “total ban, total burn” world, it makes sense for all nations to get behind this momentum.

But the conference increasingly looks as though it will be a fight between the African Elephant Coalition and the coalition of three – South Africa, Namibia and Zimbabwe. But if the three countries get their way, expected revenues would be unlikely to materialise, as it is unclear to whom they would sell. In addition, they would find themselves isolated from fellow African states.