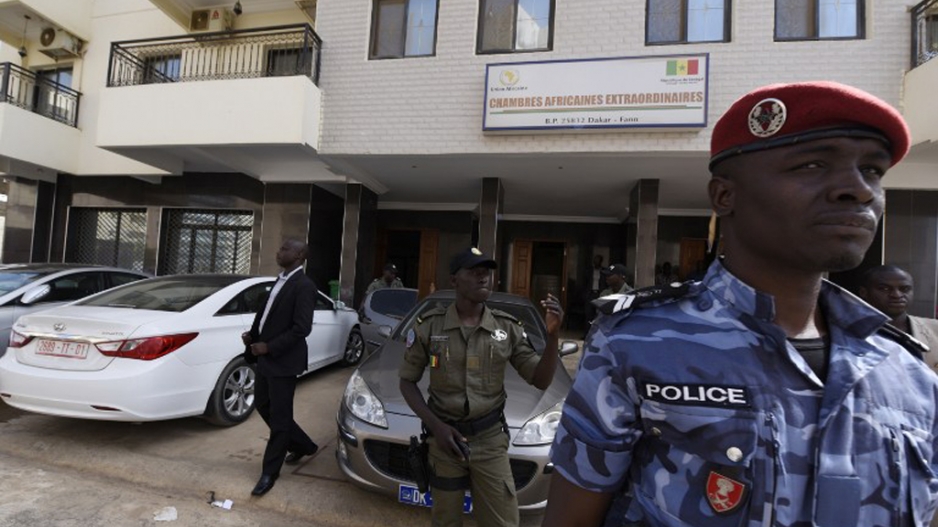 Police stand next to the car which will transport former Chadian dictator Hissne Habr parked outside the Dakar courthouse during an identity hearing on June 3, 2015.

JOHANNESBURG - It may not feel like it, but this is actually a very historic week for Africa. Two key events take place which will be a litmus test for the resolve of African leaders on issues of clean governance and commitment to the promotion and protection of human rights.

The first test: the trial of former Chadian strongman Hissne Habr is also an opportunity for African leaders to silence their critics once and for all. I’m actually surprised the AU, South African (given our recent ‘Al-Bashir’ conundrum), Zimbabwean (AU chairperson) spin machinery has

not gone into overdrive on this one; talk about an opportunity missed.

Quietly, in the Western corner of our continent - Senegal to be precise - former Chadian dictator Hissene Habr has gone on trial for crimes against humanity. This is a big moment for Africa, in fact massive.

By all accounts, this monstrous dictator’s reign of terror between 1982 and 1990 was the stuff of horrors. His secret police are said to have executed thousands of his opponents, tortured people on an industrial scale, and abducted and maimed many more.

The real historic thing about all of this is that he’s being tried by an African court, in Africa. Perhaps you didn’t get that; let me repeat: a court in an African country has put on trial a former ruler of another African state for crimes against humanity.

It all came about as a result of the AU forming the Extraordinary African Chambers (EAC) to use the Senegalese legal system to put Habr on trial for crimes he committed during his rule in Chad. The system used is known as ‘universal jurisdiction’, which allows courts in one country to try the gravest crimes against humanity committed in another country, even if the accused is/are heads of state.

I don’t know about you, but in this very moment, I can see the promised land of the AU’s Agenda 2063. Habr’s trial is ‘one small step for a country (Senegal), and one giant leap for the continent’.

See, amidst the recent ‘Al-Bashir’ fiasco that played out during the AU summit in Johannesburg, it was quite hard to shake off the feeling that African leaders were rallying against the International Criminal Court in order to shield Sudan’s Omar al-Bashir from having to face justice for the 300,000 deaths he’s accused of being responsible for in Darfur.

We’ve known for a while now that the AU is (somewhat rightly) unhappy about the ICC’s failure to apply its brand of justice evenly, in all conflict situations that fall within its jurisdiction.

In fact, by the time the AU held its summit here in South Africa last month, the calls for AU member states to withdraw completely from the ICC had been about three or four summits in the making.

But the timing of the amplification of those calls was rather unfortunate and perhaps clouded the real debate, as it was accompanied by the host South Africa acting rather roguishly by defying its own courts.

It’s hard to convince us that you’re committed to international justice, by demonstrating that domestic justice means nothing to you.

The complaints against the ICC have been accompanied by a less spirited call for the strengthening of African justice mechanisms. The Extraordinary African Chambers trial of Habr in Senegal provides a model of what’s possible if the continent’s leaders decide to stand for what’s right and send a clear message to tyrants that they will not be allowed to get away with murderous suppression of human rights and liberties, in the countries they govern.

Of course it took a long battle to convince many of them to back the EAC, but nevertheless it must be appreciated that a critical mass eventually saw the light and the court was set up.

The real test now is: will the AU and its leaders use the Extraordinary African Chambers model to bring to book the other tyrants we know who continue to fly in private jets and ride in limousines that their national resources can’t afford, while quashing even mere whispers of dissent?

Will, for example, the AU use a similar court to bring al-Bashir to trial? Do African leaders such as AU chairperson Robert Mugabe, President Jacob Zuma, the AU commission and others even believe al-Bashir has anything to stand trial for?

It would be refreshing to hear the large choir of voices that led the charge against the “imperialist, neo-colonial instrument that is the ICC”, now lead a call for al-Bashir to face an EAC-styled African court, led and directed by Africans!

I’m sure many of the victims and families of victims of torture, forced disappearances and extrajudicial killings found by a UN investigation to be commonplace in Eritrea, would welcome an African-led investigation and possibly a prosecution of President Isaias Aferwerki and his henchmen.

The strengthening of the African court on Human and People’s rights, remains mere talk at every summit. Nothing short of decisive action (not words) on this dream, will instil confidence among Africans that their leaders are serious about an Africa that will be at peace with itself and the world, and which respects and protects human rights, good governance and democracy by 2063. (In fact, many  would say we need these things yesterday, not in 2063!)

African leaders’ commitment to strengthening continental bodies of justice will continue to be the subject of scorn as long as the African court on Human and People’s Rights only hears and rules on cases such as the unfair dismissal of an official of the Malawi Revenue Authority (important as it may be), while Aferwerki’s troops apply a shoot-to-kill policy at Eritrean borders, against anyone trying to escape the onslaught in the country.

The Extraordinary African Chambers represents the Africa we want, where tyranny doesn’t go unpunished. One only hopes the EAC model will not be sacrificed at the altar of political inconvenience, as has happened with the SADC tribunal, which died a natural death after it issued a series of rulings against the Robert Mugabe-led Zimbabwean government.

The second test the AU faces this week is, of course Tuesday’s presidential election in Burundi, in which Pierre Nkurunziza seeks an unconstitutional third term, in an election blighted by months of violence and suppression of any and all opposition to his bid.

The fact that the Burundi parliamentary, and now presidential elections have been such a bloodied spectacle and a farce, that even the AU itself couldn’t stand to watch and withdrew its observer teams, should be a cue for continental heads of state and government, to stand on the side of justice, good governance and of course, Agenda 2063.

Can African leaders, please, for a change stand their ground? Nkurunziza will be an illegitimate President finish and klaar (as we say here in South Africa). Now can you please treat him the same way as you treat leaders of coups d’tat?

Can we, for a change, not see the AU use its favourite recipe to cook a “political solution” to allow him to serve five years as President in a ‘government of national unity’?

If the AU feels so strongly that the Burundian elections have not been free and fair, it necessarily means that Nkurunziza and his government have no legitimacy whatsoever.

Now can the AU use all means at its disposal to pressure this man to stage the elections again, in an environment that allows for free and fair elections, and of course without his name on the ballot?

African leaders, you’ve been asking us to put our faith in you to do what’s right. You’ve asked us to speak of the Africa we want to have by the time the AU turns 100, in 2063.

The Africa we want is one that holds despots to account, without nudging, prompting or manipulation by the “evil” West. It’s also one where perpetrators of third-termism coups d’tat don’t tarnish the good image of democratically-elected leaders such as Macky Sall, John Dramani Mahama, Muhammadu Buhari and yes … Jacob Zuma.

That is the Africa we want!