Against xenophobia, for a common humanity 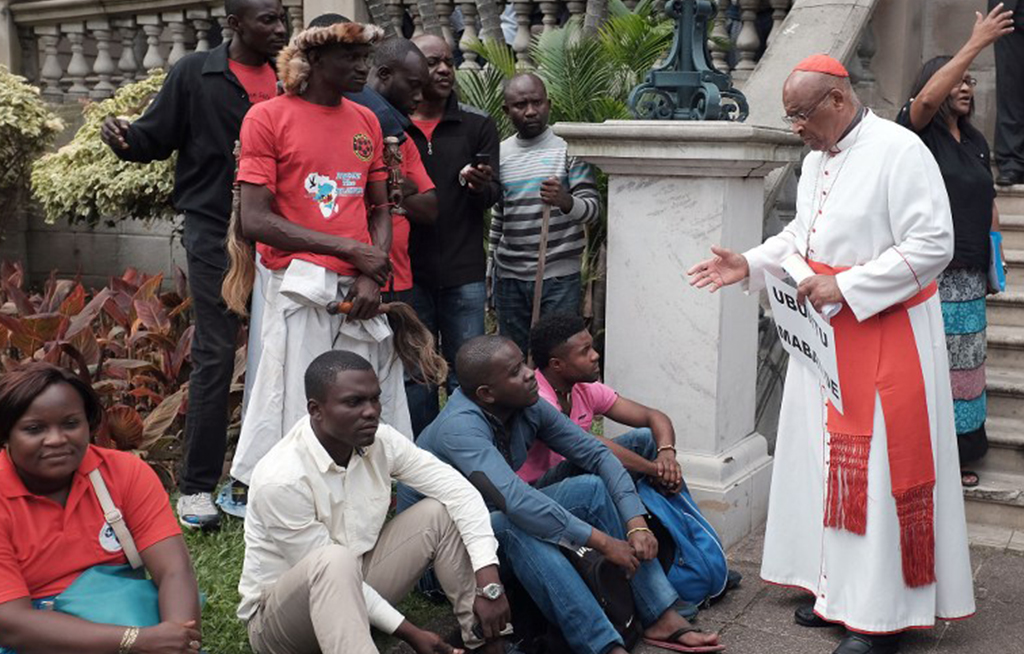 Cardinal Wilfred Napier (R), Head of the Catholic Church in South Africa, speaks to foreign nationals at a prayer vigil during an anti-xenophobia march in Durban on April 8, 2015.

In 2015 we mark the sixtieth anniversary of the adoption of the “Freedom Charter”. The preamble to the South African National Constitution (1996) echoes a crucial aspect of that charter in claiming that “We, the people of South Africa… Believe that South Africa belongs to all who live in it, united in our diversity”.  But, in 2015, we are also seeing a disturbing and spectacular failure to live out the aspiration of the “Freedom Charter” and the vision of the post-apartheid Constitution.

Once again there are waves of attacks on foreign nationals across various South African cities – thus far urban areas in KwaZulu-Natal and Gauteng have been affected, with ugly scenes in the city centres of Durban and Johannesburg. Last week, King Goodwill Zwelithini made remarks about foreign nationals – remarks couched in distressing metaphors – in a speech of which recordings are now widely circulated on the internet. Government responses, while swift, have been less than unequivocally condemnatory.

The waves of violence sporadically directed at people perceived to be foreign nationals in South Africa have complex causes. As with many other such social and political phenomena, the complexity of their causes exceed the simplicity of traditional solutions governments tend to implement. To understand even part of the reasons why the violence takes the form it does and targets the people it does, and why the specific communities and individuals perpetrate the vicious attacks when and as they do, is not an easy matter.

Social phenomena are complex in nature. They build up over long periods of time, and to trace them over that period requires a willingness to face the complex interactions between the many strands that make up the fabric of human existence. The social dynamics of post-apartheid South Africa were and are thus shaped by factors and developments inside the country and its social and political institutions, as well as by forces and factors across the world.

One of those external factors with internal repercussions has been migration. Of course, migration is not new in South Africa. The colonial period is defined by the migration of people, not just from Europe and Asia, but from elsewhere in Africa, some of whom were crucial for the industrialization of the local economy. The apartheid period also saw migration, both out of the country and into the country. But much of the focus today is on the migration of people from elsewhere in Africa into the country after 1990.

Government officials, including the president and some of his cabinet ministers, have all condemned the violence, but have consistently gone on to explain, immediately and without pause, their specific reading of the problem of ‘illegal immigrants’ and ‘undocumented foreign nationals’. While the explanation of the context of the violence is necessary, it does need to inhabit a separate moment from outright, unequivocal condemnation of violence aimed at people identified as ‘foreign nationals’ inside specific communities.

Also, the basic human respect we owe people from elsewhere should not be seen as payback for the respect that was granted us during the anti-apartheid struggle when we needed refuge in countries where migrants now come from. We ought to treat all people decently and humanely because decency is in the fabric of our being. The ‘Golden Rule’ springs to mind: treat others in ways you want them to treat you, not as they have treated you, whether in reality or imagination. Decency is not repayment for debt; decency is a matter of our own basic humanity.

Insisting that the attacks are not xenophobic, but criminal, is to read the evidence selectively. To debate whether the beliefs fuelling the attacks are ‘Afrophobic’ – suggesting that those being attacked are ‘African’ – is not only to misread the meaning of the term ‘xenophobic’, but also to project ‘Africanity’ onto the subjects of the attack for the sake of convenience while the attacks may be better explained by the social geography and the migration dynamics of the places and spaces where they occur.

Migration is a problem for many societies across the world. The anti-migration rhetoric in places like Australia, Europe, and North America, levelled specifically at people from Africa and Asia, and, to a lesser extent, people from Latin America, attests to this. In Africa and Asia, migration anxieties are often articulated in similar terms as those in first world spaces.

In South Africa, there is little public anxiety about the migration of first world subjects into the country. Their arrival is either accepted as temporary, or they are seen as the embodiment of skill and the agents of development. Migrants from elsewhere in Africa are often not seen in such terms. How people from elsewhere in Africa are viewed by South Africans is not uninflected by the class, education levels, and politics of such migrants and of the South Africans assessing them.

The beliefs and attitudes which make it possible to raid the homes and businesses of people seen to be foreign nationals across South Africa’s cities and towns, or to attack them physically, are not unique to the poor and working class South Africans who live among those they attack. Such beliefs are held among middle class and wealthy South Africans as well; we just do not  physically attack people we think are foreign nationals.

Middle class and wealthy South Africans can destroy the livelihoods of people they find threatening or whom they fear in other ways. We use the law, by-laws, walls, gates, and the committees in our places of employment to exclude and deprive, or to embrace and include people. The complex echoes between the beliefs of the wealthy and the poor, the middle- and the working class people of South Africa, are often denied in moments such as these. The gaze is insulated by class, over-determined by dated understandings of ‘race’.

Worse, the construction of national pride, the use of banal nationalism to suture over the fissures in the political fabric of the nation state, the endless recycling of jingoistic ideas about our own exceptionalism, all have exacerbated the inequalities in economic and resource access in contemporary South Africa. The insertion of the toxic ideas of ethno-nationalism and its regressive cousin, tribalism, into this unstable mixture of economic deprivation and social unease goes some way to explaining some of the mess. The intimate connection between nationalism and xenophobia can no longer be denied.

The remarks of King Goodwill Zwelithini are not solely responsible for the current violence; incendiary as they are, they only contributed to the horror. Still, they must be condemned, and unequivocally, by all our elected officials. The people involved in the attacks must be charged and tried in the criminal justice system. The communities riven by this violence must become the sites of healing, and our elected officials have a crucial role to play in bringing about such. We are a year away from municipal elections; we cannot afford to have a single campaign tainted with xenophobia or beliefs which fuel it.

Fifteen years ago, the Proudly South African campaign attempted to market the country in a television advertisement which included Nelson Mandela, Desmond Tutu and Abdullah Ibrahim telling us about the country of their imagination that they wanted South Africans to aspire to live in. It was a country, in the lyrical meditations of the speakers, recovering from horror and living in hope, embracing the possibility of a future which would not mirror the past. Are we living in anything like that country of the mind? For all its flaws, should we still want to?

In 2008, xenophobic violence flared across South Africa, resulting in the deaths of more than sixty people. Afterwards, as we reeled in shock and outrage, we declared that such should never happen again. At symposia and marches, at meetings and seminars, people from elsewhere in Africa warned us that it would not be so easy. They had, after all, survived similar episodes in the post-independence histories of their countries.

Now, new waves of xenophobic violence blight our towns and cities. We must condemn these attacks, certainly. But we must also condemn the attitudes and beliefs which inform them and make them possible. We must learn from ourselves, and from other post-independence Africans.  We are not exceptional. And we must stand up, in our communities, against xenophobic beliefs.  Those who turn their faces, either literally or metaphorically, and want to explain away this violence, may do well to remember the words of Martin Niemller, the Protestant minister who had at first been amenable to the views of the Nazis, but spent seven years in Hitler’s concentration camps afterwards: