The ANC is not encouraging black people to kill whites 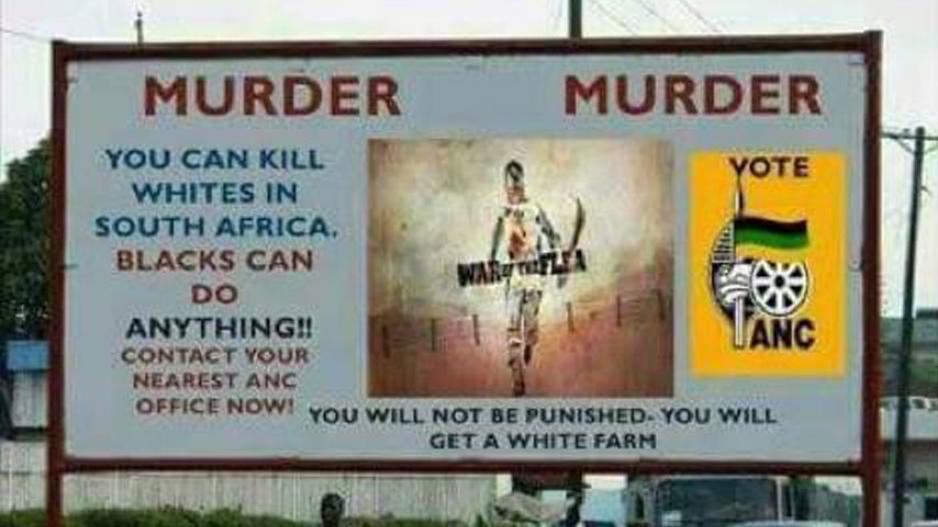 A fake image of a billboard encouraging the murder of white people.

This week, an image has been shared by frightened South Africans as evidence of the coming white genocide. It’s a photo of a billboard stating:

You can kill whites in South Africa

Blacks can do anything

You will not be punished – you will get a white farm

The photograph is – obviously – a fake. And yet, its proliferation on social media highlights the existence of a number of different socio-political groups (none of whom want to murder whites).

In the first instance, we have whatever lunatic dreamt up the fake image in the first place. It’s remotely possible that this person was trying their hand at something like satire. Far more likely is that we are dealing with the kind of person who is a gift to the world from the internet – someone who creates bilge that supports their own political argument, even if the “evidence” has to be fabricated.

This kind of rubbish is often made up about vaccinations and Nutella, but every now and then, someone takes it upon themselves to publish an easily refutable image to prove some kind of political point as well.

I’ve always wondered about the kind of person who tries to claim the moral high ground based on a piece of information that they’ve made up or an image that they’ve doctored. Their minds must be sad, complicated places to inhabit: “I couldn’t find any evidence to support a thing that I know to be true, so I made it up, and now the whole world – except me – knows I am right.”

Then there’s the next group of people that this kind of thing speaks to. They’re a little bit bigoted and they love a bit of drama. They can be identified by their hand wringing and pearl clutching. These actions are quickly followed by a click of the “share” button. Because hand wringing and pearl clutching are no fun if you can’t set off a kind of Mexican wave of anxious gestures among your circle of similarly bigoted friends.

And then, of course, there are the intelligent people who know at first glance that this sort of thing is bullshit. They usually respond with a link to Snopes or some other mythbusting site. Or, in the case of an image, implore the original poster to use a number of fact checking tools before spreading garbage and inciting hatred between racial groups (or questioning medical science, or Nutella).

In this instance, my friend Ray Joseph, fellow journalist and International Center for Journalism Knight Fellow posted a link to this set of photo fact checking guidelines.

The guidelines are very informative, but don’t provide step-by-step instructions for each fact-checking process. Nonetheless, I started at the beginning by doing a reverse image search through Tineye.

The results showed clearly that the image wasn’t an original. However, it’s clear that the original image was also doctored. It featured the same billboard, but with this writing instead:

You can do it in Finland

Refugees can do anything

You will not be punished”

So it’s clear that like attracts like in the bigot world – even when the target of their hatred is different. Perhaps there’s a central Dropbox called “bigots r us”, where people can go for images to doctor to further their own political messaging.

I am firmly in the “check your facts” group of social media users. Even without tools like Tineye or Google Image Search, I can usually spot a scam at a hundred meters on a rainy day. Be like me – don’t believe everything you see on social media. You could be participating in championing the truth and reducing racial hatred in South Africa – now that would be something worth sharing.