Armyworms are wreaking havoc in southern Africa. Why it's a big deal 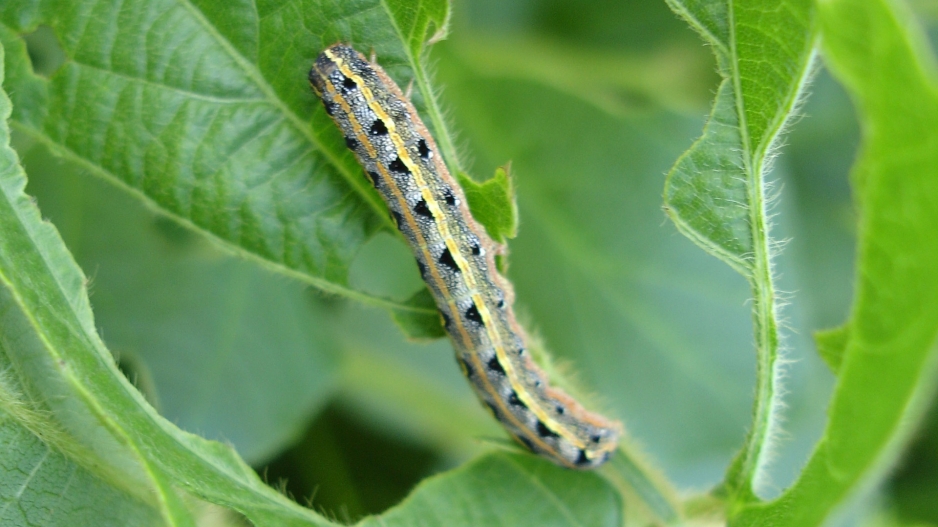 File: Armyworms are the caterpillar stage of moths belonging mainly to the genus Spodoptera.

A combination of native African armyworms and Fall armyworms from the Americas are ravaging staple crops across southern Africa. If uncontrolled, they have the potential to cause major food shortages.

What are armyworms, where do they come from and how do they travel?

Armyworms are the caterpillar stage of moths belonging mainly to the genus Spodoptera. They are called armyworms because when they have ravaged a crop they march along the ground like a vast army of worms in search of more food. There are at least eight countries in southern Africa that have been hit by outbreaks of armyworms.

This sequence of outbreaks began in mid-December 2016 in Zambia and has spread rapidly ever since. It is now as far south as South Africa. Because armyworms feed on many of the staple food crops they have the potential to create food shortages in the region.

The recent outbreaks in southern Africa appear to be a combination of the native African armyworm (Spodoptera exempta) and a new invasive species called the Fall armyworm (Spodoptera frugiperda). This new species is endemic to tropical and subtropical regions of Central and South America, where it causes considerable damage to maize and other crops.

The Fall armyworm was first formally identified as being on the continent as recently as January 2016 in West Africa, including Nigeria and its neighbours.

It is unclear how it reached Africa from the Americas but it’s likely it arrived on imported plants. It’s also possible that it migrated across the Atlantic on favourable winds over multiple generations.

It is not yet known whether the recent outbreaks in southern Africa are derived from the earlier West African ones. But Fall armyworms are known to be strong migrants in the Americas. Every year Fall armyworms fly from Mexico and the southern states of the US to Canada.

What makes them so devastating?

Both African and Fall armyworms do most damage to the staple cereal crops such as maize, wheat, sorghum, millet and rice. They also eat pasture grasses which has an impact on livestock production.

The African armyworm – they can be 3cm long – can reach densities as intense as 1000 caterpillars per square metre, quickly razing crops to the ground. On maize, the number of caterpillars per plant is, of course, much lower but it can cause just as much of an impact. The insects strip the leaves of even mature maize plants bare.

Damage to maize is likely to have the biggest impact on farmers in southern Africa because it’s the main staple food crop in the region.

The impact of the Fall armyworm is likely to be devastating because it eats the leaves of the plant as well as its reproductive parts. This damages or destroys the maize cob itself.

Where have the most devastating attacks occurred? What was the result?

In 2012-2013 the African armyworm cut Zambia’s maize production by 11 percent. The latest outbreaks could lead to losses of up to 40 percent as an estimated 124,000 hectares of maize has been attacked.

In neighbouring Zimbabwe, seven out of eight maize-producing provinces have had armyworm outbreaks, and in Malawi at least 9,000 hectares have been attacked. Figures are not yet available for the other five southern African countries currently affected.

What are the potential economic consequences if the problem is not arrested?

It is too early to say what the impact will be on food production in the region. Chemical pesticides have been mobilised in most countries, though their efficacy has been questioned. In Brazil, where armyworms can breed all year round, controlling them costs an estimated US$600-million a year. The cost of control in southern Africa hasn’t been determined yet.

But it’s likely to be substantial given that many litres of imported chemicals have already been bought by countries desperate to protect their crops. This means that even if control proves to be effective it will have been costly.

The economic consequences could be severe if the Fall armyworm persists and spreads throughout the sub-Saharan Africa region.

What is the best way to stop them damaging crops?

The variable efficacy may be due to genetic resistance, or it might be as a result of the way in which the spray is applied. The Fall armyworms are often inaccessible to insecticides because of their tendency to hide in the whorls and reproductive parts of the host plant.

Research is needed to work out which chemical is the best to control the strain of Fall armyworm in southern Africa.

But there are alternative approaches.

In parts of their native range in the Americas, genetically-modified Bt maize is grown to combat the Fall armyworm. This may also be an option for South Africa and some other countries where GM crops are already grown. But many parts of Africa do not allow or welcome GM varieties. And Fall armyworm has also evolved resistance to some Bt toxins, with some evidence for cross resistance.

There are non-chemical, biological pesticides that could also be effective. These are pesticides derived from natural diseases of insects, such as viruses, fungi and bacteria. I have been involved in the development of a highly effective biopesticide against African armyworm in Tanzania. But this still needs to go through the commercialisation and registration process, which is both costly and time consuming.

A similar biopesticide has also been developed against the Fall armyworm, but again this is not yet registered for use in Africa.

Biopesticides tend to be effective against a much narrower range of species than chemicals, which is good for the environment. But it means that they can only be used for a limited number of pests, often making them more expensive than chemicals.

There are also some other indigenous approaches that could be effective. This includes the use of local plant extracts like Tephrosia vogelli and neem, to produce botanical pesticides, and the addition of sand to maize whorls where armyworms are feeding.

Only time will tell what the full impact of this armyworm invasion will have.