That baby in the European Parliament? Not a role model for us all 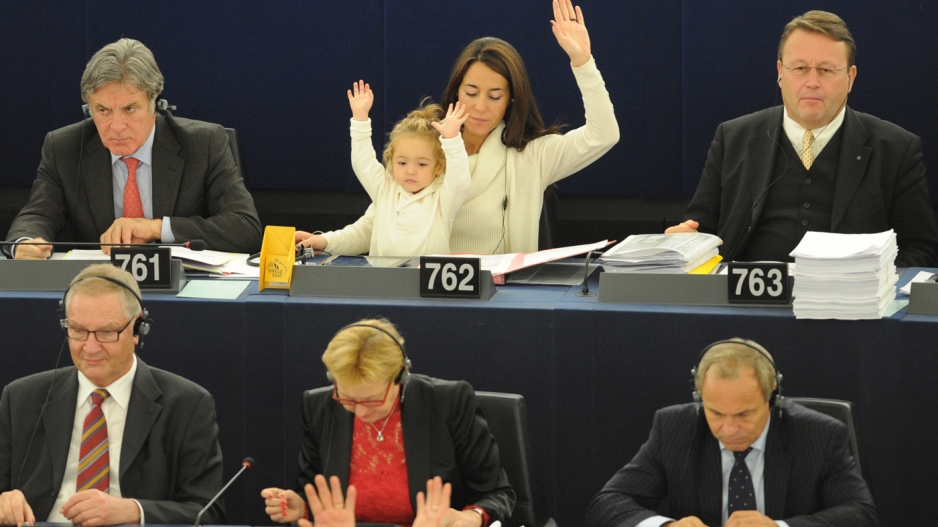 You’ve probably seen a photo of Licia Ronzulli, even if you don’t know who she is.

Who she is, is an Italian MEP representing the New Forza Italia party, who won a seat in the 2009 European Parliament election.

The reason that you’ve probably seen a photo of her is that she takes her baby – now toddler – with her into parliament.

In 2010, photos of Ronzulli were transmitted around the world, showing her voting in a plenary session with her tiny baby cuddled close to her chest in a sling.

How we admired her.

There was a woman who was playing her own small part in running the world and she was making it into work with a small baby.

It was also fantastic to see that the European Parliament was so accommodating of a new mother who presumably had to feed her baby, take a break to change nappies and deal with occasional or frequent bouts of crying.

These are serious folk, doing serious business, but their world doesn’t seem to come apart at the seams when a baby enters their midst.

That first appearance of Vittoria in parliament was apparently a symbolic gesture to claim more rights for women in reconciling work and family life – although the Wikipedia entry on this point lacks a citation.

Nonetheless, great. Whether her actions were symbolic or personal, well done Licia Ronzulli. Well done the European Parliament. And well done to little Vittoria for putting up with the business of European politics at such a tender age.

Then, this week, five years on, someone on Facebook posted an update on Ronzulli and her daughter.

There are six photos of Ronzulli in the plenary sessions, with little Vittoria growing older by her side and even, charmingly, raising her hand to vote along with her mother.

And here is what the caption burbled: “Licia Ronzulli, member of the European Parliament, has been taking her daughter Vittoria to the Parliament sessions for two years now. Life. There’s always a way to make it work. This woman runs PARLIAMENT with a baby in her lap and she’s CLEARLY doing an outstanding job because she’s still there being a total boss two years later, baby still in her lap.”

Now, unfortunately, this made me CROSS.

Before I explain why, let me say that I am in no way making any kind of judgement against Ronzulli or her choices – I think she’s great. And I want to squeeze her little daughter’s lovely cheeks. Seriously.

But sometimes, people get held up as icons and the conversation around them lays bare the fact that there are a whole lot of problems with the system – problems that I believe Ronzulli is trying to challenge.

Here’s the thing: Not a single mother I know would be able to take their child to Parliament.

Each session of the European Parliament in Strasbourg, France lasts four days, once a month – and those days are packed full of discussion and voting.

Most of us could take a deep breath and pop in with our babies to say "hi" to the other MEPs every so often, but not one of us would actually sit out a day in Parliament thus encumbered.

Ronzulli therefore either has an extraordinarily biddable child, or isn’t really attending the full quota of sessions in parliament.

Portions of their salaries may be halved if they attend less than half the sessions, so it’s possible Ronzulli is earning less than that.

Nonetheless, she earns an income that gives her options.

So while it’s great that she, with all her options, is able to take her daughter to parliament, she’s not really championing the cause of women all around the world who are struggling to make ends meet and who can’t really take their kids to work while they’re flipping burgers at McDonald&39;s.

So while I applaud Ronzulli for starting a discussion and finding a way to make the situation work for her, I don’t accept the enthusiasm of the people who disseminate her photos, crowing that “there’s always a way to make life work!” and announcing that she’s a brilliant mother for what she’s doing, when she just seems to be one of the lucky ones who’s blessed with a very mellow child, and who had options, even if her child wasn’t a saint.

Sure, workplaces should be more accommodating to the demands of motherhood, but those accommodations should be about flexibility so that mothers can spend daylight hours with their children, making mud pies and poking things with sticks.

The ideal vision of a future where people’s roles as parents are respected doesn’t include everybody bringing their tiny child into the boardroom every day.