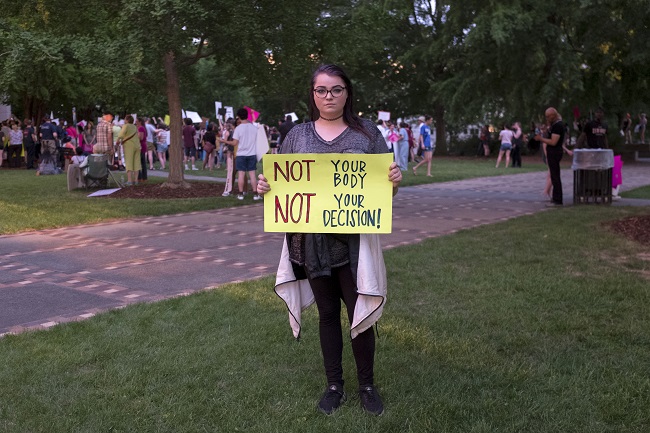 Liz Satterfield poses for a portrait in Ingram Park in Birmingham, Alabama, May 19, 2019 during the March for Reproductive Freedom.

ALABAMA - It's been a particularly tough week for Margaux Hartline, a volunteer who holds a large umbrella over women going into an Alabama abortion clinic so their faces are unidentifiable to religious activists.

Last week, the southeastern US state passed the strictest anti-abortion law in the country, and Hartline says there's been a jump in "harassment" from anti-abortion activists who shout from across the street at women going into the clinic.

"They're ramping everything up, and we're very worried that more people are going to show up," said Hartline.

Wearing a rainbow-coloured vest, Hartline works from the porch of the "Power House," the headquarters of a local reproductive rights group that escorts women into Reproductive Health Services, the clinic right next door which is one of only three in the state.

Abortion is among the most divisive political issues in the US, and the doorsteps of abortion clinics nationwide have become the sites of daily standoffs between pro- and anti-abortion rights activists.

On the one side are activists who stake out clinics and attempt to convince women not to have abortions with tactics that reproductive rights advocates say are aggressive and involve harassment or shaming.

"If they find any kind of identifying information, if you have a school sticker on the back of your car or something, they will do whatever they can to identify you and they'll call your school, your church, your family, your job, anything. They're actively trying to ruin these people's lives," Hartline said.

On the other side are people like Hartline, who waits for women to park in front of the clinic before approaching them with a big blue umbrella that she holds over their heads, shielding their faces as anti-abortion activists shout "Don't kill your baby!"

"It's disgusting. It really is. They want to shame these patients as much as possible," Hartline said.

But to 61-year-old Susan Decker-Bunce, among the crowd of activists who shouts at women entering the clinic, what happens inside is murder.

"If you see that it looks like a baby, it's not a clump of cells. You can see the head, the arms, the legs, the tiny little toes."

The new Alabama law, HB314, virtually outlaws terminations of pregnancy, threatening doctors with between 10 and 99 years in prison for abortions and offering no exceptions for cases of incest and rape.

Set to go into effect in November, the law is likely to be blocked in state courts by lawsuits from human rights groups.

But for anti-abortion activists, who refer to themselves as "pro-life," it's all part of the plan to trigger a legal battle over the procedure in the US Supreme Court that could overturn the landmark 1973 ruling that made abortion legal in the United States.

"It's not the baby's fault, it was the father that did the raping," she said. "The baby is innocent."

"They don't want to hear anything because they're so blinded by fake medical facts," said Candace O'Brien, vice-president of healthcare access with Yellowhammer Fund, which provides financial help to women who need an abortion.

"They say that there are 10 fingers, 10 toes, right now, like if you're three weeks along," she said.

"That's medically inaccurate because that's not how fetal development even happens."