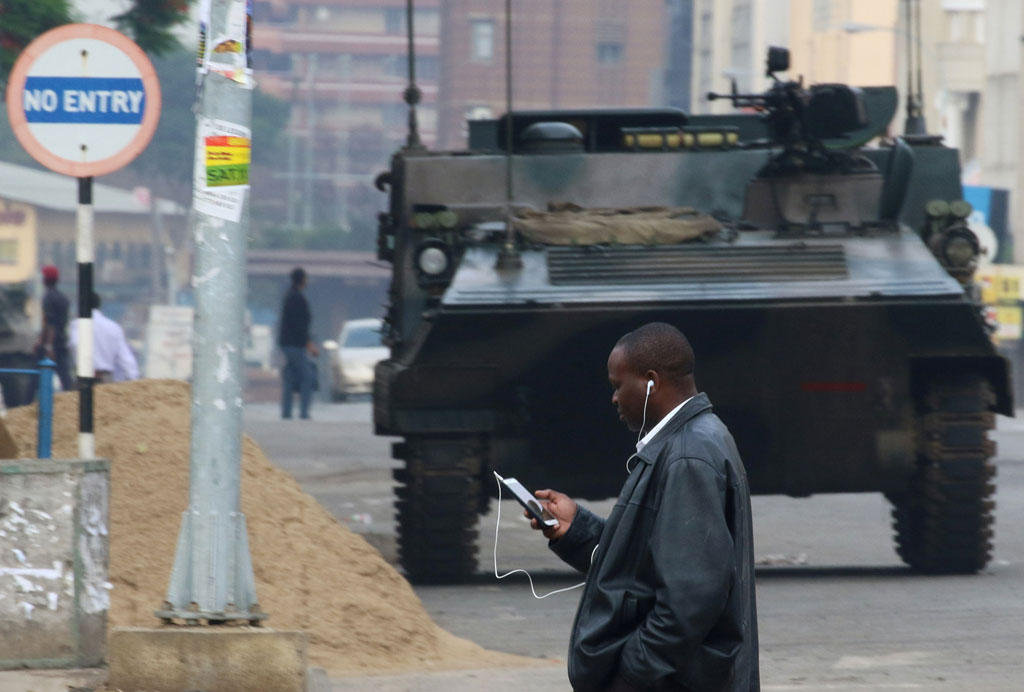 A man uses a mobile phone as he crosses the street in Harare, Zimbabwe November 17, 2017.

Thursday was a gloomy day, weather-wise, in Harare. It actually rained quite a bit during the day. The grey clouds frowned menacingly over Harare, a city fondly known as Sunshine City. But there was no sunshine throughout Thursday, and in a political, social and economic sense, the sun has hardly shone over this city, this country and these long-suffering members of the ‘big house of stone’ (Dzimbabwe) in nearly two decades.

But the gloom of the miserable weather belies a distinct sense of hope that, in the natural order of things, defies logic.

People aren’t supposed to be hopeful and optimistic in a country undergoing a military coup, are they? That’s weird. But then this whole coup is weird. Things escalated rapidly in about 48 hours when the service chiefs threatened to "step in" to arrest the deteriorating state of Zimbabwe’s liberation Zanu PF movement, to the dramatic troop movements on Tuesday and Wednesday. And then we waited, and waited, and waited on Thursday with hardly any discernible movement of the situation; just diplomacy shrouded in rumour and speculation.

Harare and indeed Zimbabwe’s rumour mill is a mega factory. One minute you’re hearing Mugabe has agreed to surrender power and has negotiated a safe passage out of the country, the next you’re told he is refusing to step down. I’ve ridden this roller coaster before, of course. The sense of expectation around the embattled president’s negotiation with the defence force&39;s top brass is not unlike the 2008-2009 negotiations for a government of national unity, which were also shrouded in secrecy, also triggering the rumour and speculation mill to go into overdrive.

But away from the rumour and speculation around the negotiation, there are a few things that struck me on Thursday. Firstly, this was the first full day of work in Harare for me, having jetted in on Wednesday night. I still can’t get over it! There are no police officers in Harare! There are no cops! No ZRP. None in sight!

There are no words to describe how surreal this is. A country that has effectively become a police state over the past two decades, and yet the dull, depressing grey and blue uniform of the ZRP or the lime bibs of the traffic police is the rarest sighting in Harare this week.

Secondly, and this may be controversial, but the truth must be told no matter what. It’s actually easier to do your work as a journalist under this army-controlled state than it is, under ‘normal’ circumstances. Two experiences of my colleagues make the point.

In the first instance, a cameraman colleague was filming the tanks stationed around Munhumutapa building (Zimbabwe’s seat of power, which houses among others the president’s office and the powerful Ministry of Information) was spotted by the soldiers manning these juggernauts of war on chains. They stopped him, asked to see what he had shot, and when they were satisfied it was nothing harmful, let him move on with his life! Huh? What? Just like that?

Ask any reporter, camera person or photographer based here what being spotted while filming ZRP in operation would have meant, and the words that immediately come to mind; Harare Central, Chikurubi, Matapi police cells or worse, Goromonzi (which is home to a notorious Central Intelligence Organization interrogation farm).

The second experience that underscores how ‘nice’ the de facto current rulers of Zimbabwe, the army are being to us is when another colleague was seen filming soldier activity. When asked for her accreditation, it was inspected and thereafter the soldier gave it back to her and said ... wait for it ..."Thank you, ma’am"! What is happening here? Where am I? “Thank you, ma’am”. I can assure you now, that’s not at all how Police commissioner Augustine Chihuri’s men and women in uniform would have reacted in the same scene.

Heck, even the dozens of unaccredited international journalists who swarmed into Harare over the last two days are going about their business and we haven’t heard of any arrests (unless I missed the news?).

Anyway, before I go, I’ve got to mention the lengths to which the propaganda machinery is going to reinforce and amplify a sense of ‘peace and tranquillity’ in the country.

On Thursday evening, when most journalists here and indeed observers watching the unfolding situation from around the world were speculating about what has or has not been conceded by President Robert Mugabe in the negotiations for a solution to the impasse, the state broadcaster, now under defence force control, led with two stories about the agriculture season and farming inputs.

The update on the negotiations quite strangely featured almost at the half hour mark of the main, hour-long evening news programme.

Mhm! These are strange times, a strange ‘non coup’ coup, and a strange, pregnant atmosphere that so many anticipate may lead to jubilant celebrations of a ‘second liberation’, when in reality it remains possible that this could remain a conundrum for quite some time to come.

This is Zimbabwe under General Constantino Chiwenga.