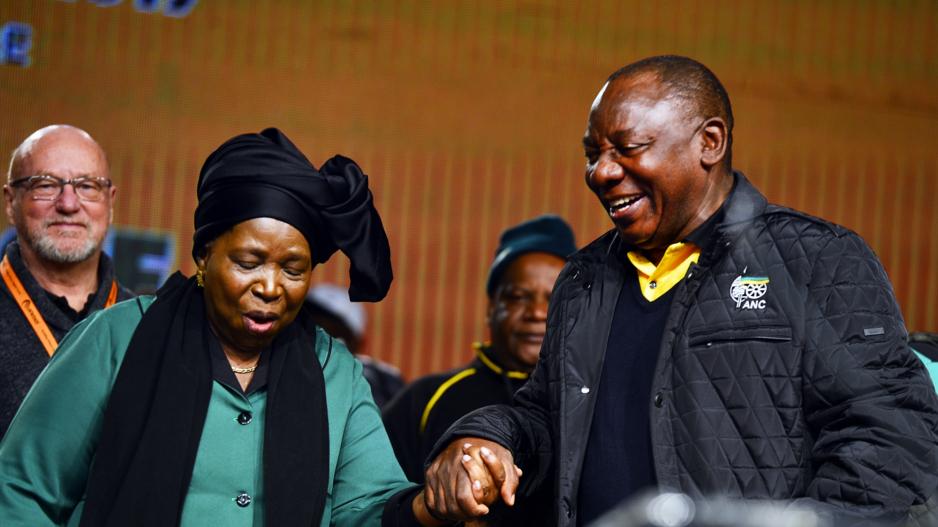 File: Nkosazana Dlamini-Zuma and Cyril Ramphosa are embroiled in a bitter struggle for the ANC President position.

Renowned poet and writer, Maya Angelou, once wrote that “if you are going to live, leave a legacy. Make a mark on the world that cannot be erased”. This is one important call that still eludes many people who occupy prominent positions in society and are at the brink of leaving lasting legacies. Nkosazana Dlamini-Zuma and Cyril Ramphosa embody leaders that do not know when to stop falling into the trappings of lusting over power.

These are two leaders who have over the past 40 years worked very hard to contribute to South Africa’s liberation struggle and the post-1994 democratic dispensation. Now, they are embroiled in a bitter struggle for the ANC President position. This will see one of them move into political wilderness in a brutally humiliating fashion, given that both believe that they are going to emerge as the winner.

At the heart of the problem is that both are contesting in an environment that is at odds with the legacies they have built over the past 40 years. Cyril Ramaphosa is widely known for the role he played as co-founder of the National Union of Mineworkers (NUM). Yet, both leaders cut their political teeth during university years with the South African Students Organisation (SASO). Ramaphosa was at the University of the North (now known as the University of Limpopo) when he was subjected to solitary confinement in 1974 supposedly for organising pro-Frelimo rallies, that confinement lasted for 11 months.

Dlamini-Zuma became deputy president of SASO in the 1970s while pursuing her studies in the University of Zululand. Two leaders whose political formation happened in the same epoch are connected by much more than their formative stages. They both have tasted the possibility of becoming President of the Republic of South Africa. This is a contest of has been or would have been presidents.

Ramaphosa was seen as the likely person to become Nelson Mandela’s deputy president and would, therefore, stand as heir to the throne. Unfortunately, this never was the case and following him being side-lined from ascending to the presidency he left party position politics and went on to play a meaningful role in the private sector, becoming a billionaire in the process. For purposes of this article, I am unconcerned on how he generated that wealth and the politics of corporate capture of ANC elites. That is a topic for another day. The fact is that Ramaphosa was the Secretary-General of the ANC from 1991 until 1997, he left that space and went on to become – as presently known – part of the top 15 richest people in the country according to a published Forbes list. Obviously, they are all men. There are only two black people on that list and the second black person happens to be Ramaphosa’s current brother-in-law, Patrice Motsepe. The story of the possible consolidation of the Motsepe dynasty if Ramaphosa becomes president is a story for another day.

Dlamini-Zuma has never served in the top 6 of the ANC, but she has always featured prominently when it comes to the election of the NEC. She always occupied a respectable ranking in terms of the number of votes received by fellow NEC members elected by the conference. She has also served as Minister in the cabinet from 1994 until 2012. She did not leave cabinet because she was reshuffled. Significantly, she went on to become the first woman elected as the African Union (AU) Commission Chairperson. The lack of achievements during her tenure there are a subject for another article. Today, she stands at the brink of making history once more. The imperfection of the political conditions that could make this history possible is a subject for another article. The ANC in its almost 106 years of existence has never had a woman as president, deputy president, secretary-general and possibly treasurer-general. Women have often had a supporting act of deputy secretary-general reserved for them. The patriarchy that engulfs the ANC, historically, is also a subject for another day. Dlamini-Zuma’s case is even much more different. She actually contested for the deputy president position at the ANC’s Polokwane Conference in 1997. Then, she was on the Thabo Mbeki slate and because Mbeki could not stand for a third term as President of the Republic of South Africa it was almost destined that Dlamini-Zuma would go to the Union Buildings while Mbeki would remain at Luthuli House.

Today, Dlamini-Zuma is said to be a proxy of President Jacob Zuma, yet even back then she was seen as a proxy of former president Mbeki. How has she managed to be caught up in the politics of these fundamentally different leaders within a decade? Does this point to her hunger for the top seat at Union Buildings? She is having a second bite on the cherry. She lost in 2007 will she lose again in 2017 to another person, Ramaphosa, who seems to want it to circle a 20-year old political score over her 10-years old one? Maybe this too is a story for another day. These leaders are of the same generation. Dlamini-Zuma born in 1949 is only three years Ramaphosa’s senior.

Both these leaders had intact legacies before being caught up in this bitter factional battle that has further torn up the ANC, to the point of causing fatalities in some local structures. They were at the brink of leaving behind legacies, they kind that would be an indelible mark in the story of the formation of a new South Africa, as Maya Angelou envisioned for all of us. Ramaphosa would have been remembered as the fighter of poor mineworkers, even though his involvement with the Marikana massacre tainted this legacy. He would have been remembered for his involvement in the drafting of the much-lauded South African constitution, even though his complicit involvement with the Jacob Zuma administration went on to taint this legacy. Dlamini-Zuma could have been lauded for her roles in the Ministries of Health and Home Affairs especially, even though the Sarafina II scandal-tainted her tenure in the former ministry. Ultimately, she would have exited gracefully in the political landscape, having been the AU Commission Chairperson, one of the most prized positions in African diplomatic circles. She could have then gone on to occupy some important missions and responsibilities in the United Nations even. Forget about the uselessness of these bodies and focus on legacy for a moment.

South Africa, here stand two leaders who sacrificed impeccable legacies – yes with controversies but not enough to decimate them – at the service of their uninhibited yearning to become President of the Republic of South Africa. They are both tainted by Zuma’s disastrous politics of greed, political gangsterism and absolute constitutional delinquentism (new word alert)! They do not mind being advanced by compromised characters who are hardened factionalists that have been fingered in participating in practices that have brought the ANC to its knees. Whether an Ace Magashule or Senzo Mchunu acts as a power broker, they both once travelled the same road that tore apart the ANC. Here stands a lesson on a need to know when to say no to your political ambitions. Whatever happens in the upcoming conference, these two leaders have grossly reversed the gains made by them in the past almost 40 years at legacy building.

What a pity the ANC will be led by someone who has demonstrated questionable principle and moral judgment at the service of political ambition!

* Lukhona Mnguni PhD intern researcher in the Maurice Webb Race Relations at the University of KwaZulu-Natal. Follow him on twitter on @LukhonaMnguni.