Free higher education in South Africa: cutting through the lies and statistics 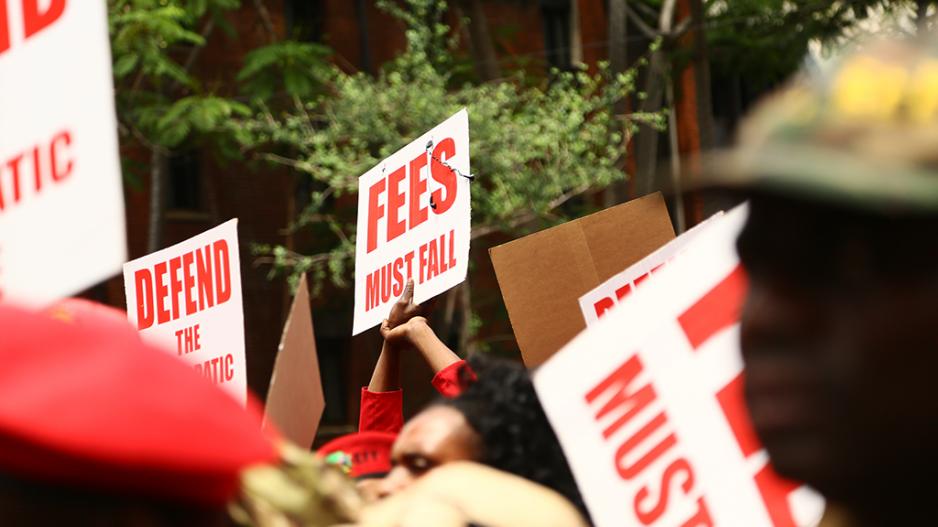 Fees must fall placards by the EFF supporters.

Public discussion about higher education funding in South Africa has been beset by numerous fictions and misunderstandings since the Fees Must Fall movement emerged in 2015. These have been compounded by the political opportunism of President Jacob Zuma and his advisors.

In mid-December 2017, with relatively little consultation or planning, Zuma announced that in 2018 free higher education would be provided to all new first-year students from families that earn less than R350,000 per year.

Having participated in the 20-year review of South African higher education in 2013, advised parliamentarians on different funding proposals in 2015, and engaged with a report by the commission Zuma set up to examine fee structures, it’s become apparent to me that it is critical to debunk a number of prevalent myths around higher education funding.

The current public “debates” contain many myths or misconceptions about what free tertiary education would mean, ranging from the implications of free higher education proposals for poverty and inequality to the feasibility of funding such proposals. Unless these myths are unmasked the free higher education debate will remain misguided and likely lead to very different, negative outcomes.

In many respects, Zuma’s free higher education proposal is the worst kind of populism. It’s been sold as a radically progressive policy that can be achieved with no negative consequences. But it will actually do very little for the neediest South Africans. And it could have negative consequences for the stability and progressiveness of public expenditure.

Myth 1: Spending on higher education is about helping the poor

When the Fees Must Fall movement emerged, it insisted its fundamental demands were based on concern for poor South Africans. The movement argued that this group was effectively excluded from higher education or disadvantaged in their studies because they could not afford the fees and other costs of studying.

The idea that the movement for free higher education is based on a concern for poor youth is clearly absurd when you consider that only 5 percent of South Africans aged between 15 and 34 are students in universities, while 34 percent are unemployed.

A recent, comprehensive evaluation by South African and international academic economists for the World Bank, examined the effect of government spending and taxation on inequality. Using data on who pays taxes and who benefits from different kinds of public spending, it found that higher education was the least progressive of all social expenditure. It did the least to reduce inequality, since higher education benefits only a very small proportion of the population and those who do benefit tend to come from wealthier households than the vast majority of South Africans.

Strictly speaking, this is true. The problem is that supporters of Fees Must Fall have written about possible ways of raising revenue as if the money is effectively free. Proposals such as “double the skills levy on companies” or “increase income taxes” are empty; they fail to address the negative consequences of tax increases.

A higher skills levy, paid by firms to fund national training initiatives, means lower profits for firms and potentially less investment. Higher income taxes could lead to greater tax avoidance measures, shifts in how employers remunerate employees, or a reduction in people’s working hours. All these could lead to revenue decreasing. Such dynamics need to at least be taken into account when tabling such proposals. But this has not happened.

The result could be a reliance on taxes, like VAT, that are harder to avoid because they are paid by the vast majority of South Africans. There’s a perverse consequence to all this: “free higher education” could actually increase inequality.

This myth-making has recently been compounded by Zuma’s proposal and its advocacy by one of his advisors, Morris Masutha.

Masutha claims that free higher education will “fund itself”, primarily by reducing future social security spending on social grants and government-built houses. He insists that abolishing fees will lead to higher economic growth.

Given the tiny proportion of poor youth who can access higher education through their basic education results, the claim about social expenditure is clearly false.

There is a positive relationship between higher education and economic growth. But the current proposal could only “pay for itself” if it produced dramatically more graduates and so increased their economic contribution. There is no reason to believe an effect of that scale is likely and no modelling has been provided to support such claims.

Zuma’s proposal contains two extremely dishonest components: the definition of “poor and working class” students and the limiting of the policy in 2018 to new first year students.

A rough costing by the Department of Higher Education and Training in 2015 suggested that the threshold could be raised to R217,000 per year for all students. This would benefit more needy students and, at an estimated cost of R12.5-billion, been far more feasible than what Zuma has proposed.

Myth 5: Zuma’s proposal is feasible because it “only” costs R12-billion and R15-billion

Current estimates put the cost of Zuma’s proposal in 2018 at between R12-billion and R15-billion. Some commentators have suggested this cost will remain static in future. That is almost certainly false.

It would only be true if such funding was either not extended to students entering universities in 2019 or was taken away from the 2018 cohort. Neither scenario makes any sense. Instead, funding is likely to be extended to second years in 2019 and third years in 2020. That will likely lead to an annual cost of R40-billion or more.

An increase of R12 to R15-billion may be affordable. But a R40-billion increase is an entirely different proposition.

Thousands of new students are being registered at universities right now. The 2018 Budget is set to be tabled next month with public finances under extreme pressure. Given this reality, it’s critical that all the myths surrounding “free” higher education are laid to rest.

Only then can difficult decisions be taken in the best interests of all South Africans.