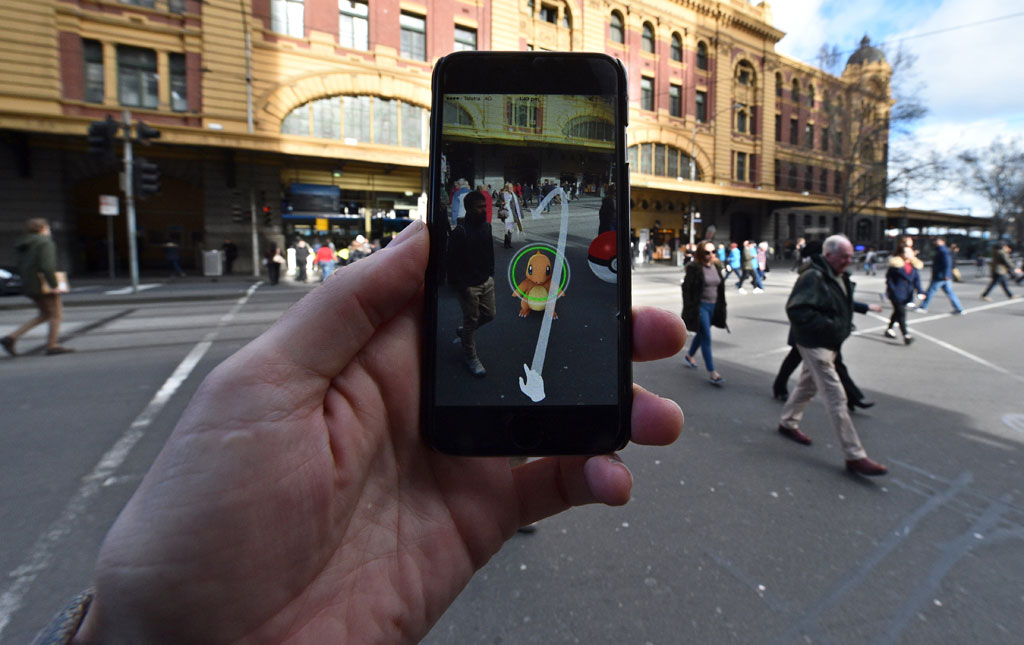 A person (partially obscured) plays with the new game 'Pokemon Go' on a smartphone on Flinders Street in Melbourne, Victoria, Australia, 12 July 2016.

“Mom. Mom! We’re going to the park for Pokmon.”

The offspring, phone in hand, is moving towards the front door with a speed seldom seen on a slouching teenager.

“It’s a Pokstop and there’s a Staryu nearby, but only for 30 minutes,” the cousin shouts over his shoulder, as if it’s some sort of explanation. And then they’re gone.

Pokmon, I remember as a craze in the late 90s – something about monsters and trainers and Nintendo and a cute yellow character called Pikachu, if I’m not mistaken - but beyond that, the exchange was basically meaningless. In the two days since the boys hit our local park in search of virtual creatures, it’s like Pokmon GO is the only game in town.

Here’s the low down, in so far as I have gathered it from my informants.
* Pokmon GO is an augmented reality mobile game launched on 1 July in the USA. It is available (unofficially) in South Africa through a work-around that lets you play on a US account.
* It uses your phone’s GPS to track your location and make Pokmon (they be the creatures - Pokmon is short for pocket monster) “appear” around you, on a map of your own city or suburb.
* There are 151 creatures and the aim is catch them all. When you come within range of a Pokmon it will show up on your phone.
* The action happens at Pokstops and Pokmon gyms, virtual hangout spots located in real world meeting spaces – local parks, schools, churches and landmarks, for instance. Through GPS, players are shown where their nearby spots are. Players travel around in the real world to find and capture these virtual Pokmon, train them, battle them against each other. The game gives you a limited amount of Pokballs. You can trap wild Pokmon by throwing balls at them using a flicking motion with your finger.
* A player can pay real money for a “lure module” which brings Pokemon to the area for a limited period, and anyone quick enough to get over there can take advantage. Hence the rush for the door in our house.

So that’s the basic story. I won’t bore you with the bewildering array of characters and currencies (candies and star dust), the levels and the power ratings, the methods of capture, training and battle. Any reasonably competent 15 year old will be happy to do that for you. Not that 15 year olds are the only adherents. 20-somethings are flocking to the game, attracted by their nostalgia for their childhood Pokmon experiences.

Megan Thomas (21, and a smart graduate student with an actual life) says she went from eye-rolling to addition in the space of a day. “The night after it was released all the boys at the party I was at went for a walk to find a Pokmon. I thought it was the most ridiculous thing I’d ever heard. Next day my digs mates were going on an adventure to find Pokmon at Zoo Lake, so they downloaded it on my phone. By the time I’d caught my third Pokmon I was hooked. It was very addictive, because there are little rewards all the time, and there’s a competitive element because other people are finding Pokmon that are more powerful or rare.  Zoo Lake is particularly nice because you can find water based ones and last night we all hopped in the car to find some night time ones.”

Megan’s night-time adventures were cut short when the server went down, overloaded by the huge number of users. The response to Pokmon GO has been extraordinary. 24 hours after its release, the game topped the American App Store’s Top Grossing and Free charts. Nintendo shares have sky-rocketed, adding $9 billion in market value to the company in a few days.

Forbes.com provides some more gee whiz figures –Pokmon GO is installed on more Android phones than Tinder. Users are spending twice as much time on Pokmon GO as they are on apps like Snapchat. The worldwide rollout was “paused” as servers were overloaded with players. Anecdotally, based on the not-very-scientific measure of my own facebook feed, I can tell you that it’s addicted players and head-scratching non-players.

Is this a bad thing?

The cousins returned an hour after they left on their adventure, looking flushed. They’d scoured the neighbourhood, from park to school to lake, covering kilometres of ground. To incubate the eggs (don’t ask, just believe me, it’s a thing), you have to walk a certain number of kilometres. Yes. Exercise. Throw away your Fitbit and go catch em all (Pokmon reference, if you didn’t get it).

Look, hunting and training imaginary monsters sounds like a crazy way to spend your time (especially if you are over 15). But truth is, if they weren’t out catching Pokmon they’d probably be lying on their beds messing about on Snapchat, or Instagram, or one some other game. On the lesser-of-two-evils measure, Pokmon wins out against many other possible time-wasters. And it has some unique benefits. It brings the Pok-nerds out into the parks and streets of the local suburb. The cousins/hunters had met up with friends and a crew of new real life Pokmon players too.

Having developed a certain cynicism from a lifetime in Joburg, I did wonder whether the game might also bring out the Pok-muggers. Distracted teenagers with pricey phones seem like easy pickings for anyone smart enough to work the system. Sure enough, I read yesterday of a group of US teenagers, been lured and mugged, using in-game items that attract Pokmon. Distracted trainers have suffered injuries from falling while playing the game (pictures of bruises and scrapes helpfully supplied online). One young woman found a dead body while scouring a dodgy riverside for Pokmon. Scare stories aside, you can’t fight Pokmon. They’re everywhere, I tell you.

You can watch the trailer here: