Helen Zille on colonialism: 12 Tweets and a chat vs scholarship 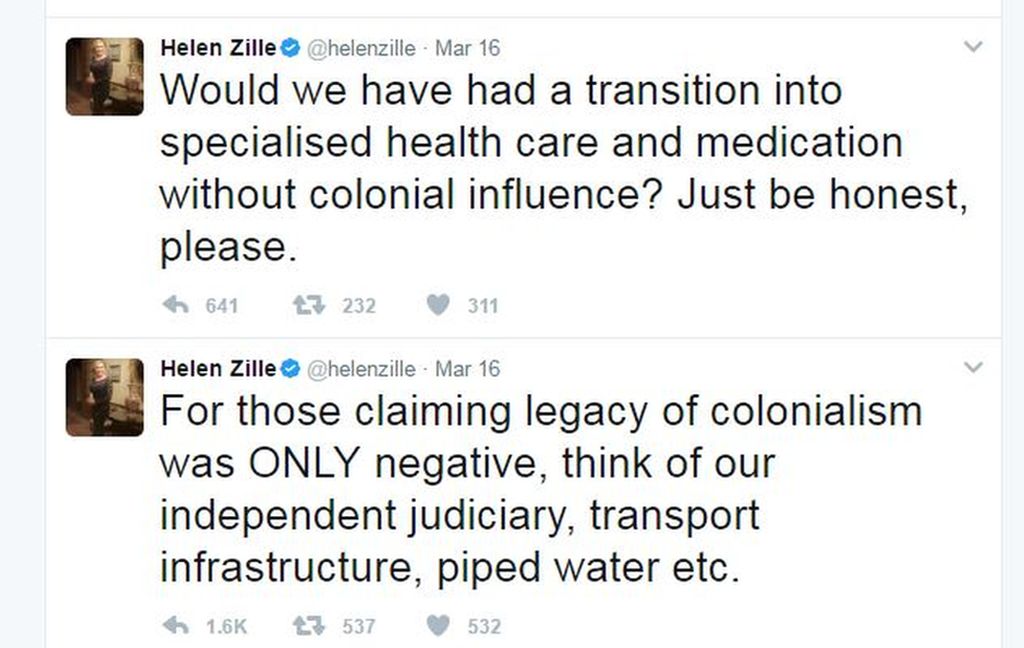 Helen Zille opened herself up to broad-based criticism after passing comment on what she perceived as certain positive legacies of colonialism. The twittersphere was not amused.

South Africa has had another week of intense – more intense than usual – debate on colonialism and its legacy in South Africa. The brief re-encounter with our sense of the past more than with the substance of that past, was triggered by the Twitter activity of Helen Zille, former leader of the Democratic Alliance and currently the premier of the Western Cape Province.

Zille has a history of tackling topics she is ill-suited to hold court on, but this has not stopped her. Quite the contrary. Her views on HIV and Aids research drew fire from the scientists in the field. Professor Francois Venter characterised her views as ‘a confused mess of poor science, incorrect history, moralising, and an appeal to what seems to her to be ‘common sense’, despite good scientific evidence to the contrary’. It is hard to imagine a more damning dismissal by a senior researcher in the field. But Zille does not brook the accent of reproof, ever, under any circumstances.

She is never wrong, and most especially when she is most assuredly misguided. Years of research in the field? A long list of peer-reviewed scientific articles on the topic?  Accolades from other senior colleagues in your field? None of these have ever given Zille cause to hesitate about tackling people whose views she thinks are wrong.

But if science research is about answering the small questions, for which data and evidence (at least in positivist science) are crucial, and work and arguments proceed by very small steps, social science is an infinitely more complicated task. In the scholarship of the social sciences and humanities, the questions are much harder to address, and the evidence much more difficult to pin down.

But even with this trouble, specificity and accuracy are crucial.

In Culture and Imperialism (1993), Edward Said defines the terms as follows: ‘“imperialism” means the practice, the theory, and the attitudes of a dominating metropolitan centre ruling a distant territory; “colonialism”, which is almost always a consequence of imperialism, is the implanting of settlements on distant territory’. One wonders whether Zille draws such a distinction, or whether for her colonialism is indeed all in the past, and whether imperialism makes any difference to her views about why and how countries ‘succeed’ or ‘fail’ in this moment in human history?

Unlike the specificities in the scholarship on colonialism and imperialism, whether in academic disciplines like History or Economics, Literary or Cultural Study, Philosophy or Political Science, Zille’s views seem founded, to go back to Venter, on that very ‘“common sense”, despite good [social] scientific evidence to the contrary’.

Zille claims to have discovered and delved into the vast literature on colonialism during her short trip to Singapore earlier this month. Her clarifying remarks at the Knysna Literary Festival focused on one source, Lee Kuan Yew, whose book was given to her by the officials of the diplomatic mission of Singapore in South Africa. Having read intensively and widely into this field for graduate degrees, and in the course of my work as a researcher and teacher at various universities for two decades, some of us are gobsmacked by the casual manner in which Zille can draw conclusions from a few days’ immersion. Are we to believe she is an opsimath?

Over the course of those twelve tweets limited to 140 characters, much was revealed of Zille’s views of the world, and of her place in it. Her questions are rhetorical: she, and she presumes we, already know the answers, and we are all in agreement. Her minutes-long clarification in Knysna, providing ‘context’, far from improving her position, worsened it. What is vulgar in Zille’s view on colonialism is not that they are wrong. It is not even that they are insensitive to the position of many in the country she lives in. The truly vulgar aspect is how Zille wades into a field she seems to know nothing about, and then styles herself as the ideally places person to pontificate.

Her clarifications are merely generalisations about which territories were and which were not ‘colonised’. She offers absurdly uninformed views about the history of African states like Liberia and Ethiopia, whose present is reduced to the presence or absence of colonial conquest – the rest of imperial histories of conquest and violation erased in favour of the sort of factoid you would have found on bubble gum wrappers a generation ago. Instead of helping us to understand history and its complexities, she flattens it out, as if even at the height of colonial conquest, conquered people's lives were constituted by nothing but their relationship to the colonial conquerors.

Astonishingly, Zille seems to think colonialism is responsible for roads and piped water. Relations of coincidence and correlation are rendered as relations of causality.  Everything is over-simplified.  In the sort of equivocation beloved of third-class undergraduate essays, Zille wants to present the history of the world, and of this part of the world, as a spreadsheet of advantages and disadvantages. Yes, there was violence and violation, but look, there was also the introduction of a monetary economy and vaccines.

In 1997 an Emeritus Professor of Economics at the University of Cape Town dismissed Noam Chomsky’s outline of the political economy of colonial conquest, examining the ways trade protectionism accompanied military violence and programmes of cultural assimilation and decimation introduced as formal education were integrated over the five centuries of European colonialist expansion. Chomsky had cited the work of historians of economics, economic theorists from Adam Smith through Joseph Schumpeter – citing page numbers from his formidable memory.

The emeritus professor suggested Chomsky take a walk along University Avenue, past the ivy clad Herbert Baker buildings, to the post office, named Rhodes’ Gift, to see the benefits of colonial conquest. What had perhaps been styled by the Emeritus Professor as a moment for his David to slay Chomsky’s Goliath did not quite proceed in that way. There was an embarrassed titter in the room, before Chomsky politely and gently pointed out the specific record of Rhodes, and of the relationship between metropolitan England and its colonial ‘possessions’, citing scholarship.

Scholars and thinkers like Chomsky discern patterns from specificities. They consult a vast array of sources, both primary documents and critical analyses of such material, to discern the pattern.

Politicians like Helen Zille clearly do not have the time or the intellectual prowess to do the same, no matter how often they claim to have read widely, yet feel utterly entitled to dismiss those who do.

This is not a quibble about whether colonialism had delivered positive results alongside the violence and destruction it was premised on. That is quite the wrong question to ask, misdirecting inquiry and drawing false relations between sets of phenomena. Even at the height of imperialism and the colonial conquest it unleashed on the subjugated majority of people in the world, some intellectuals in the metropolitan centre were not confused about the project. Joseph Conrad captured the critique of his times well in Heart of Darkness (1899):

It was just robbery with violence, aggravated murder on a great scale, and men going at it blind -- as is very proper for those who tackle a darkness. The conquest of the earth, which mostly means the taking it away from those who have a different // complexion or slightly flatter noses than ourselves, is not a pretty thing when you look into it too much. What redeems it is the idea only. An idea at the back of it; not a sentimental pretence but an idea; and an unselfish belief in the idea -- something you can set up, and bow down before, and offer a sacrifice to’

Is Helen Zille (and those who seem to want to find merit in her misguided line of inquiry as they run to her defence may want to ask themselves this question also) trying to find that ‘idea at the back of it’, and ask us all to bow down before it, in order to sanitise her ‘unselfish belief in the idea’ that colonialism brought us piped water and road infrastructure?

At the very least we owe ourselves better explanations of our past, explanations which can stand up to the rational test, are substantiated by a critically literate reading of the evidence record, and is based on intelligent engagement with scholarship. Anything else is quite the opposite of the ‘meritocracy’ Zille seems so fond of desiring, and which she praises Singapore for.

Scholarship cannot be done in twelve tweets and a fifteen minutes long chat at a literary festival.  But the value of its methods and the import of its arguments ought not to be ignored in those contexts by those who wish to be taken seriously on topics where they prove themselves little more than dangerous, rank amateurs.