#HlaudiHasFallen: End of the road for the SABC emperor and his board 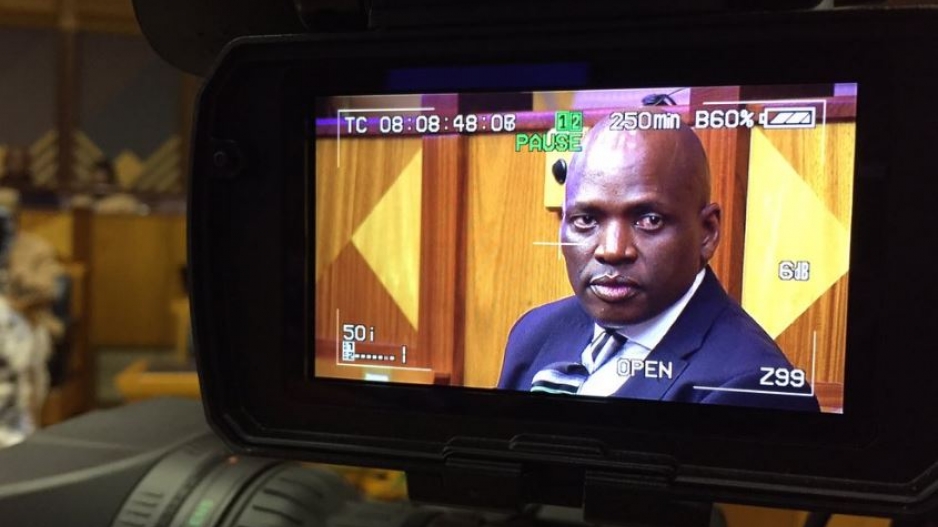 Hlaudi Motsoeneng himself made a surprise appearance at Wednesdays presentation.

If you had to puff up a word cloud of the SABC board’s Wednesday presentation to Parliament’s Portfolio Committee on Communications it would read something like this: “fraudster, disrespect, dysfunction, institutional genocide, Verwoerd, cowboy conferences, a dog show, remove Hlaudi Motsoeneng, dissolve the board”. And just like that, the Madness of King Hlaudi was called, finally exposed, and dealt with. Game over. It was a roast of note. Oh, and some ANC members found their spines.

You know that pavement gambling con? The one where you bet on a pea or a small ball under one of three cups. The conman then swiftly shuffles them around while you try to keep your eye on the hidden ball. That is more or less what the SABC board, led by its chairman Mbulaheni Obert Maguvhe, tried to accomplish with its “amateurish” presentation to Parliament’s Portfolio Committee on Communications on Wednesday, justifying its reappointment of Hlaudi Motsoeneng.

The board had been urgently summoned to Parliament (which is currently in recess) by ANC Chief Whip Jackson Mthembu when it unlawfully reappointed Hlaudi Motsoeneng as group executive of corporate affairs after his previous appointment as COO had been set aside by the courts. Mthembu described the reappointment as “the last straw that breaks the camel’s back”.

But no one was falling for the con trick on Wednesday. It in fact exploded in their faces. At the end of the session the board had been dissolved. Game over. Hlaudi, however, is still in denial.

Motsoeneng himself made a surprise appearance at Wednesday’s presentation, ushered in by the ever-reliable rent-a-crowd song and dance of the Ses’khona Peoples Rights Movement who dusted off their “Hands off Hlaudi” banner and protested outside Parliament. King Hlaudi sat behind his political human shield, Minister of Communications, Faith Muthambi, fresh from a work matter in Mauritius.

About three-quarters of the way into the “dog show”, as the Democratic Alliance’s James Selfe termed the presentation – during which SABC board chairman Mbulaheni Obert Maguvhe shuffled the cups trying to convince everyone that Motsoeneng was legally still an employee – two board members, Krish Naidoo and then later Vusi Mavuso, resigned from the board on the spot.

A surprised Naidoo said that it was the first time he was hearing the board’s presentation on Wednesday and moved quickly to distance himself from it.

“If I was party to it I would have made the following contribution to some of issues that are pertinent. I would have informed you about three issues from a legal perspective because that is what I am, a lawyer. The first thing very simply is the Western Cape judgment. You had a judge say this appointment was irrational. Full stop. That means at that point had you taken further legal recourse, it would have still meant that the incumbent was no longer an employee of the organisation. By going on appeal to the SCA what you in effect do is stay that judgment, you stay an employee until the SCA makes a decision. That decision was made a few weeks ago where the SCA said there were no prospects of appeal. Now at that point, that is the final door. You are no longer an employee of this organisation. As simple as that,” Naidoo told committee chairman Humphrey Maxegwana.

Naidoo added that the SCA decision had had nothing to do with Motsoeneng as an employee.

“Whoever gave the SABC that advice should be shot,” was the free practical legal advice he offered.

Naidoo added that the board was dealing with issues of compliance “in a very superficial manner” and reiterated that the Public Protector’s 2014 report was binding. The long process the board had embarked on undermined this, he said.

“I want to say that I am not satisfied. This presentation was amateurish. What are we doing here? Some of us have come through some serious struggles where we have come to the point where we would like to give a better life for everyone. And here we are sitting and discussing and spending valuable time discussing mundane issues. I have come to the conclusion that this board is dysfunctional, it should be scrapped. And personally I will be resigning today as a board member.”

Minutes later board member Vusi Mavuso also resigned, saying he too had not been party to the presentation. Mavuso added that at least eleven SABC executives had been offered severance packages which amounted to a form of “institutional genocide”.

“You have people with institutional memory who are taken out of the institution...What is going to remain now that they are gone? There will be a game of musical chairs where executives will be appointed from people within... we are not following due process. I cannot afford to be party to that. Similarly, my contribution to this board is not adding value. I am tendering my resignation today,” said Mavuso.

The board faced a grilling of note from all the members of the portfolio committee, including those from the ruling party.

ANC MP Mondli Gungubele, former Mayor of Ekhuruleni (against whom the DA has laid charges relating to the irregular awarding of 285 tenders worth R7-billion), and who was “deployed” to the committee a day ago, queried whether the board was indeed “fit”.

Gungubele said Motsoeneng faced “serious allegations” and the fact that he had promised local artists that the SABC would broadcast 90 percent local content was more of a bribe for them to keep quiet and so that they could “eat”.

“You say he [Motsoeneng] has unique skills. Every time I hear this question, let me tell you this. If Verwoerd [dramatic pause as the name sank in before he repeated it], yes, Verwoerd offered artists of South Africa in the 1980s [Verwoerd was assassinated in 1966 but why let the facts stand in the way of a good argument], 90 percent and said I am giving you 90 percent but apartheid continues... there is no way you would have accepted that.”

At this point the parliamentary camera panned on Motsoeneng, who looked puzzled.

“Because Verwoerd at that time would be addressing material issues. If you have a COO who implements rules that undermine the founding principles of our democracy because he is giving 90 percent because there will be food at night. So is that what defines us? We don’t need democratic principles. What we need is food. It is only Verwoerd who would have spoken to us like that. We would have told him we reject that,” Gungubele ended with a flourish.

At the end of about five hours the committee resolved that the current board should be dissolved and face a parliamentary commission of inquiry. Committee members spent the last part of the afternoon deliberating correct procedures so that no door was left open for Hlaudi to sneak back in.

What remains now is for the National Assembly to accept the committee’s recommendation for the dissolution of the board. The decision will then make it to the desk of No 1, the man who has been backing Motsoeneng all along, who must then appoint an interim board in consultation with the NA.

Increasingly, those who could be viewed as being blindly loyal to President Zuma are being hung out to dry even if they are in a state of denial.

A defiant Motsoeneng left the venue after the grilling going completely rogue and reportedly telling journalists that those who thought he was burnt toast had better think again.

“This is just the beginning so I just wanted to say to you, Mr Motsoeneng remains defiant.”

After their thorough arse-whipping on Wednesday the SABC board has called a press conference for 14:30 on Thursday.