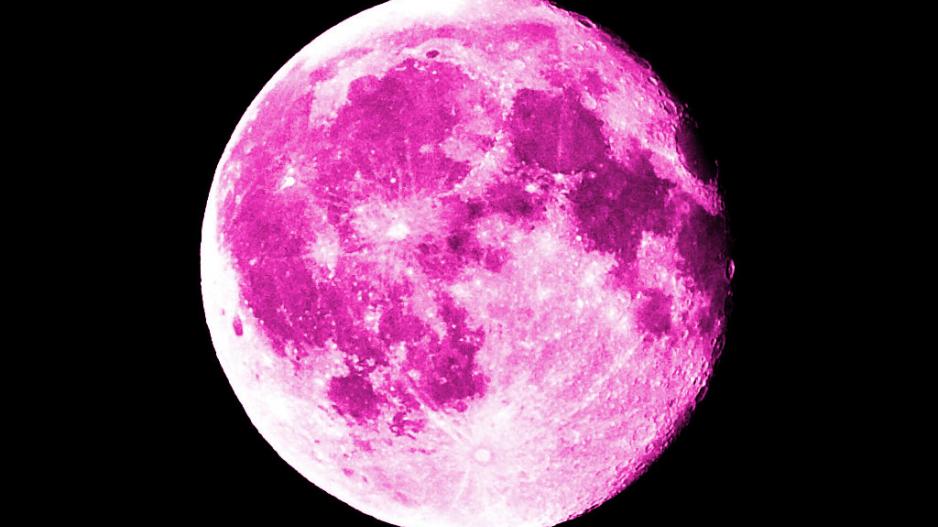 Because Facebook says there'll be a pink moon, it must be true ... right?

This column would have been up yesterday, if it weren’t for the onion debacle. I’m lucky to be alive, frankly, after eating an onion that had been cut the previous day and put in the fridge. Who knew it was so dangerous? Although after the water bottle massacre, in which, you’ll recall, many thousands died from reusing plastic water bottles, we should know to be more careful. If only they’d thought to dose themselves up with tumeric, which cures 23 varieties of cancer as well as untold other diseases, information which those big pharma bastards have been keeping from us all these years so that we will buy their expensive useless drugs and then die anyway.

So, there was that narrow miss with the onion, and then I overslept, because I was up all night waiting for the Green Moon, visible for the first time since 1847. It was magnificent. Perhaps even better that the Pink Moon last year.  And then I had to pop in and visit my poor friend who’d been sprayed with perfume at the mall, but it turned out to be chloroform and shame …

Except none of this is true. If you were to believe your loopier Facebook friends, you’d be hearing this sort of thing all the time.  People would be dying in their droves from eating elderly onions, or not forwarding emails, or failing to meet their nutritional requirement for tumeric. There would be actual photos of the green and pink moons, snapped on iPhones, not images photoshopped from a stock picture of the regular old moon and then changed colour.

One word, people: Snopes. The hoax-busting website is your friend.

I’d like to see the Green Moon as much as the next girl. More, probably. But there was something about the story that just seemed off.  The explanation sounded vaguely nonsensey: “the seventh planet from the Sun, Uranus, will park itself near the moon … The cosmic odd-couple will appear about four degrees apart in the sky – equal to 8 full moons side-by-side…” I think it was the term “park itself” that did it. A quick trip to snopes.com and a search for “green moon” and sure enough, there’s no such thing. The shopped-up moon pic has been doing the rounds – if you’ll excuse the pun – for a couple of years.

While I was there, I checked out the killer onion story. Hoax. And the women killed by sniffing perfume samples. Hoax. And the earthworm meat in McDonalds burgers. Ditto. Hundreds more.

There’s a certain catastrophic whiff to a lot of Internet bulldust. Everything is dire! Deadly! Food is so dangerous, it’s a wonder there are so many of us alive.
Evil doctors are keeping information from us in order to, well, I don’t know why really, it’s never been quite clear.

Often there’s a kernel of truth. The recent “marijuana cures cancer” headline is true-ish, in that a study has shown that the weed kills cancer cells in the lab. Cannabis has not been proved to kill cancer in humans. In fact, according to Snopes, the National Cancer Institute clarified the referenced statement by saying there’s not enough evidence to recommend cannabis to cancer patients. Big food businesses do put horrible fillers into food to cut corners and save money, but not earthworm meat, as far as we know.

Half the time, the rumour doesn’t sound even vaguely plausible. Surely earthworm meat would be, kilo for kilo, as expensive as cow meat? More so, even. Earthworms are small, and you’d need scores of the slithery suckers to make a burger. You’d have to breed them in soil and then dig them up and wash them off and grind them up. They just seem impractical as a food source for mass consumption.

Certain salient facts – places, sources, sample sizes – are often missing from the suspect post. Alarm bells ring for any post that starts: “There is a tribe in Africa…” There will follow some mushy anecdote about how some lovely group of people does some charmingly Ubuntu-ish thing. Like gathering around the person who has done a terrible thing and assuring them that they are loved and accepted. Hang on a mo, what tribe? And where in Africa? It’s a big place, you know. And perhaps in some place people do gather round to assure the miscreant that he’s loved; others, in another place, might set upon him with sticks and stones and hound him out of the village. Really, you need to be more specific.

The world is full of danger, inefficiency and corruption. You really don’t have to try too hard to find real examples. Just flip through a newspaper, any newspaper, on any given day.

Take SAA. Every second week there’s something in the press - scandals, financial trouble, mismanagement. Yet someone went to the trouble of inventing and distributing a claim, currently doing the rounds (again!) on social media, that the national carrier employs 55 500 employees for the fleet of 60 aircraft, with the conclusion that SAA employs 925 people a plane. Way more staff per plane than other airlines around the world.

A Business Times spot survey in 2013 found that the unknown author of the email exaggerated SAA&39;s employee numbers. The number of employees was much lower, closer to 11 000, making the ratio about 184 people a plane.

In the interests of truth and fairness, I shared the Business Time piece in reply to the people who shared the SAA story. Were they grateful? No. Were they the least bit apologetic about spreading total drivel? You bet not. In fact one person’s answer to my helpful fact-checking on her behalf was, “Yes, well my daughter flew SAA last week and the service was terrible…”

But that’s a different thing! That’s not what you said!
*helpful volunteer fact-checker bangs head on desk*

As Shakespeare said. Or maybe it was Madiba. Or perhaps Gandhi: “Don’t believe everything you see on the Internet, friends.”