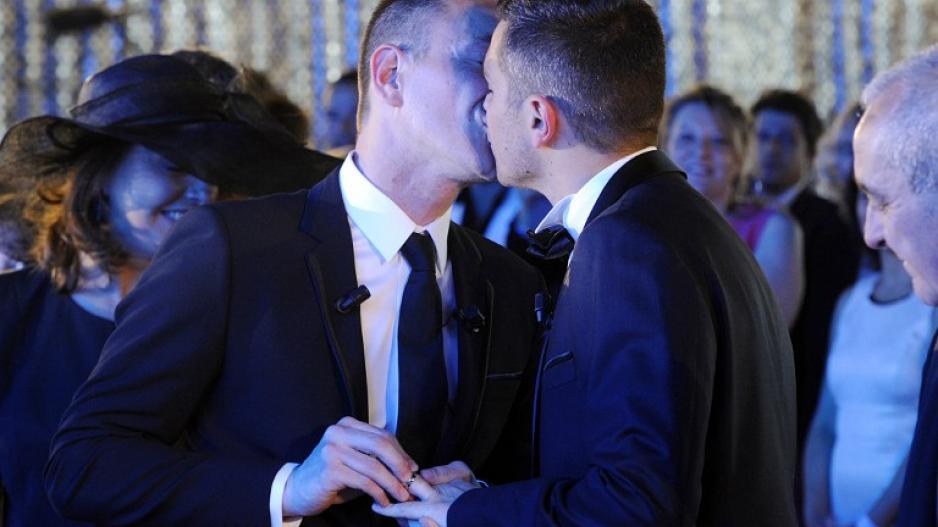 Bruno Boileau (R) and Vincent Autin (L) kiss as they exchange their wedding rings during their marriage, France's first official gay marriage, in the city hall in Montpellier on May 29, 2013.

A few weeks ago I went to see a new play called ‘Civil Parting’, which tells the story of a gay male couple getting divorced. It’s an unusual subject for South African theatre, and afterwards, standing around chatting with a few friends, we started speculating about the gay divorce rate in South Africa.

“But we can’t really talk about that,” one (gay) friend said.

“No, or the religious right will use it against us,” another agreed.

This might sound like a bizarre and disingenuous approach, especially in a country where a vocal opponent of gay marriage, Pastor Ray McCauley, has been divorced twice. But I knew exactly what they meant, and I understood it. The fight for gay marriage, in this country and others, was long and bitterly-contested. Nine years ago, shortly before gay marriage was legalized, opponents warned that all manner of dire social consequences would result from this progressive legislation. Here are some actual quotes from submissions to the South African parliament from religious groups in November 2006, a few weeks before gay marriage was passed:

“If the Bill was passed, people would believe that it was acceptable to indulge in behaviour that was contrary to the moral fibre of society, and more would experiment with homosexuality.”

“Marriage was love expressed through sacrifice, and marriage would deteriorate to nothing meaningful, would destroy the future of the family.”

“Same sex unions would mean the death of civilisation.”

Now, I must admit I’m not sure what kind of time-frame these groups had in mind for when these dreadful prophecies would come to pass. It also bears saying that if you are the type of person constantly on the lookout for signs that civilization is crumbling, you’ll probably find your evidence everywhere from Marikana to Miley Cyrus. But with these predictions in mind, the Department of Social Development’s White Paper on the Family, approved by Cabinet in late June, makes for interesting reading.

But the general marriage rate within South Africa is also low. Over the past decade it has dropped, but not by much. In 2003, 195 972 marriages were registered, and by 2010 this figure had fallen to 180 822.  Data from 2011, interestingly, showed that while the total number of divorces fluctuated between 2002 and 2011, the highest divorce numbers were in 2005, just before those pesky gays ruined the institution of marriage, and the lowest divorce numbers were in 2011.

The fact remains that for some time, South Africa has had among the lowest marriage rates in the world. Some of the reasons for this are thought to be to do with poverty and education: internationally, wealth and education are correlated with higher marriage rates.  (Although among rich-world countries, as the Economist noted in  January, marriage rates are also declining.)

The point is that the legalization of gay marriage in South Africa appears to have made no appreciable difference to the social value placed on the institution. This news will be nothing more than stating the obvious to liberal ears, but perhaps it’s worth highlighting at a time when we are seeing gay rights put under threat throughout Africa, in some cases under the influence of – and with the aid of the wallets of – powerful American evangelical groups.

Of course, in some respects South Africa remains an anomaly when it comes to gay rights: a country which made legal provision for gay marriage many years before some of its European and North American counterparts, but which still sees the right to life of gay people endangered daily. If it were hoped that the legalizing of gay marriage would pave the way towards a culture of acceptance in which gay hate crimes were to be considered unthinkable – well, that is one way, indeed, in which the gay marriage project appears to have failed up till now.