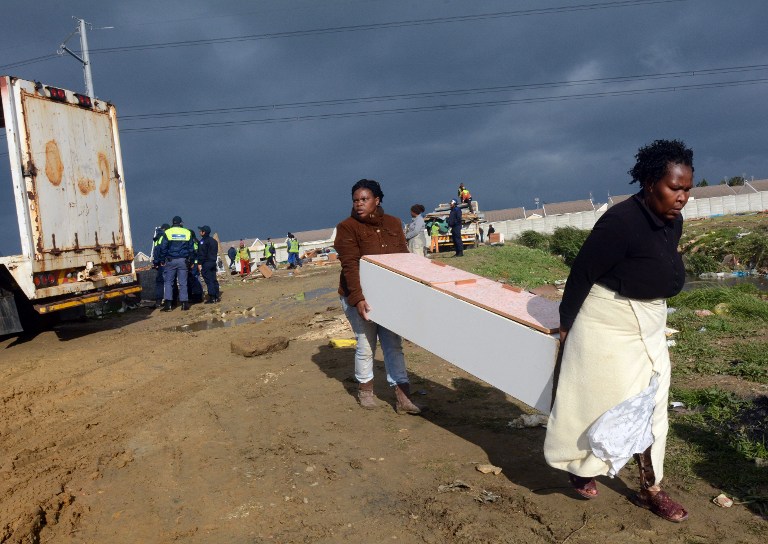 People carry away their belongings before workers (not pictured) dismantle their makeshift dwellings in Lwandle.

The measure of any society’s decency and humanity can be taken in the way it treats its most vulnerable people.

This week South Africans once again had an uncomfortable reminder of our shortcomings in matters of decency and humanity in the government-administered evictions of people from an informal settlement at Lwandle in the Western Cape.

A photograph of Theboheng Nelani reaching for her toddler through rolls of blade wire was one of several images circulated via social media platforms which left many South Africans aghast at the spectacle of dispossession playing out on their mobile telephone and computer screens.

Pictures of a school girl in a neat chequered skirt and school jumper emptying her home of her family’s belongings and handing her textbooks through the blade wire barricade before the demolition reminded many that these were ordinary people, and returned humanity to the mostly faceless mass of poverty in South Africa.

The evictions and home demolitions in the Nomzamo informal settlement are the disturbing consequence of squabbles between various government departments and agencies: the South African National Roads Agency Limited (Sanral), which owns the land and is situated in the Ministry of Transport; the Department of Human Settlements, at both provincial and national levels; the Western Cape provincial government; and the City of Cape Town.

As officials from various government agencies engaged in a combination of blame-shifting and evasion of responsibility, Twitter and Facebook recorded in almost real-time the tragic events unfolding through two cold early winter days and nights in the otherwise wealthy Helderberg area.

The images were undeniably moving: they showed people trying to rescue bits of their lives from a coming disaster. But, behind the human-made terror of the evictions, lurked the grief of nature.

Last week indications were that the Western Cape would face a particularly harsh winter, with increased chances of heavy rains leading to flooding, particularly in informal settlements. And now snow is predicted for the surrounding mountains, which will cause temperatures to plummet.

From the local level to the national level, the people of Lwandle have been failed by government. They claim that they moved onto the land and occupied it illegally because of the untenable "backyard rental" situation – a national problem in housing the poor in urban areas.

Over nearly a decade the area in dispute has been at the centre of a tug-of-war between Sanral and the Cape Town city authorities. The conflict seemed to centre on the provision of water and sanitation services and the proposal to upgrade the motorway in the area as part of the Winelands Toll Road Project.

The image of one of the Lwandle residents, a man, arms thrown up in despair, his face contorted with a combination of grief and outrage, symbolises the troubles of this community.

Other photographs are reminiscent of the forced removals at Sophiatown in the 1950s and District Six in the 1960s. Only, instead of flatbed trucks, Lwandle’s people had to contend with armed police officers, and armoured vehicles, as they watched their paltry possessions trammelled.

As the residents emptied their homes built of materials discarded by the wealthier among us, evidence of their complex lives amid the simplicity emerged.

These shacks were places where children laughed and cried, did their homework amid such inconceivably few resources that one felt shame at looking on and in so intrusively. These were humble abodes, places where men and women made love and argued and made up. One thinks of Athol Fugard’s play People Are Living There.

The South African government has for a long time claimed an ethos of "Batho Pele" (People First), based on a philosophical principle that people are people because of and through other people ("Ubuntu").

In the treatment of the people of the Nomzamo informal settlement they seem to have come last in the deliberations of officials from the city government all the way up to the national ministries. Seemingly, no viable solution could be found to house these people adequately and humanely, or even to find them temporary shelter from Cape Town’s unpleasant winter weather.

In the bureaucratic paper-trail by which the evictions and demolitions were authorised we see the ironies of living in a developmental state. The letter in which the City of Cape Town instructs Sanral to follow the judicial route to resolve the "problem" at Lwandle bears the words "This City Works For You" at the bottom of the page, repeated in isiXhosa and then Afrikaans.

If in South Africa people are indeed people through other people, then we all need to look closely and carefully at the meaning of the events in Lwandle.

During the 1980s, through the United Democratic Front’s education and awareness campaigns in communities, many of us learnt that "an injury to one is an injury to all".

All South Africans are implicated in the inhumane conduct of various government entities against the people of Lwandle; it was done in our name.

What we must resist is replication of the patterns of complicity and silence. We have lived through scenes like these before: let us learn from that history.