The militarisation of suburban space 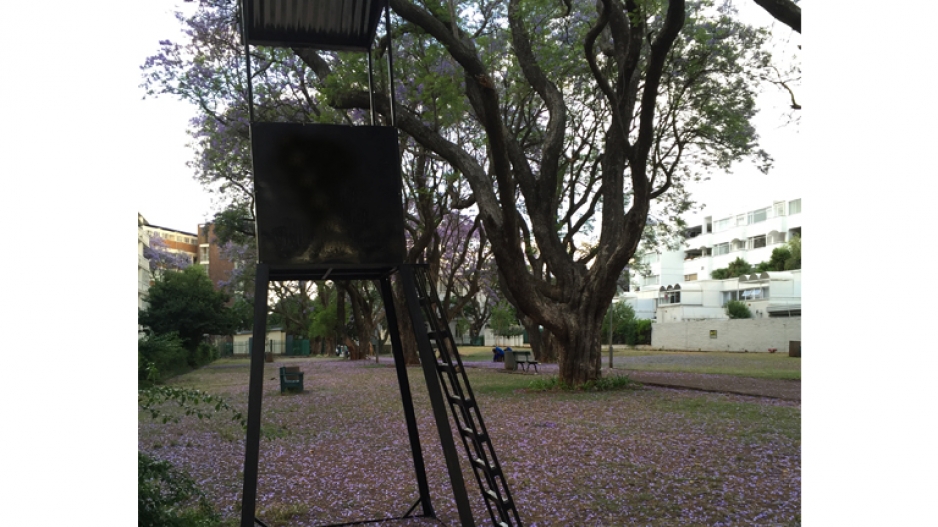 Johannesburg, 05 November 2015 - The idyll of South Africas leafy suburbs is being disturbed by men with guns. Angelo Fick wonders about the effects of this telling shift on our children.

The men in military camouflage-patterned pants armed with assault rifles like those we have become accustomed to seeing in shopping centres when large amounts of cash are taken from or placed inside automated teller machines, are standing on a suburban street on a Friday morning in late Spring.  They are replacing men who used to guard the desk, armed only with a two-way radio, and the modern equivalent of a cudgel, and maybe pepper spray.  Their managers, two other men, one in a jellabiya, the other wearing a yarmulke, are in conference, talking and gesturing at various parts of the block of flats their company has been hired to protect.  It is, in some senses, a homosocial fairy tale of social integration.

Scenes like these ought to give us pause.  They are abnormal, and the ‘new normal’ of the times and places we live in in South Africa.  The symbols of our suburban incarceration are at odds with our idea of ourselves as living in peaceful times, of being free.  We are no longer at war with any of our neighbouring states, a major achievement given South Africa’s apartheid era habits as the region’s violently psychopathic, ‘thugnificent’ bully.  The majority of us do not want to go back there, or so we choose to believe.  We are not officially engaged in a civil war.  We are, by the look of things, living in Dickensian good times.

But the barbed and blade wire strung along the tops of incredibly high boundary walls, the electrified fences, the traffic booms and ‘temporary road closures’ which have been in effect since the end of the last century, the armed guards standing outside wooden and sheet-metal huts, are permanent features of many suburbs in South Africa.  Additionally, armed guards prowl the streets in armoured vehicles, labelled ‘tactical response’ or ‘community patrol’.  They are keeping us safe, we tell ourselves and our children, seated in our cars with the windows tinted and firmly shut, moving between one locked garage and another, between home and shopping centre.

The accoutrements of prison complexes and concentration camps blend with suburban brutalism (from bton brut) across most of South Africa’s bourgeois suburbs.  The wealthier the inhabitants of such suburbs think themselves and are assumed to be, the higher the walls, the more elaborate the palisade and electrified fencing.  Round the clock surveillance cameras at street corners are supposed to give reassurances of security, while the also, ironically, signal the opposite.  Mostly these militaristic measures are explained as the consequences of ineffective public policing and an increase in violent crime targeting the wealthy.

There have been multiple attempts to transform the ‘kragdadige’ old apartheid South African Police Force into ‘community focused’ post-apartheid South African Police Services.  Military ranks have been withdrawn, reintroduced, and withdrawn again; the debate about demilitarising the police services has also returned, like heartburn.  Various post-millennial National Police Commissioners have been mired in reputational and other troubles.  In recent years, incidents that led to the deaths of Andries Tatane and Mido Macia, and the conduct of the police at Marikana, among several other incidents, speak to the challenge faced by those who manage the sector to shift from the violating past patterns into effectively policing a Constitutionalist democratic state founded on respect for inalienable human rights.

Statistics continue to show that the people most vulnerable to criminal violence are among the poor in the country.  The middle classes, however, and also in their role as gatekeepers of and disseminators of information, construct themselves as the primary targets and victims of violent crime.  The war on poverty can too often seem and sound like a war on the poor.  So, while the majority of South Africans have to rely on public policing, the minority in the middle class increasingly rely on private security companies to protect them.

Such privatised security arrangements can lead to the sort of conduct which echoes colonial and apartheid habits.  Homeless people find themselves removed from suburbs like Forest Town and Saxonwold in Johannesburg’s north by the private security firms that patrol there, and dumped elsewhere, often in the inner city.  Vagrancy by-laws are cited to defend the practice when the Constitutionality is of these informal ‘influx control’ practices are challenged.  In small towns like Grahamstown, experience has taught one, the conduct of private security guards can be much more frightening, with suspects beaten up in the back of vans before they are taken to the police station.

South Africans now spend over R70 billion on private security arrangements.  Some of this goes towards the guard towers that have appeared in public parks, the booms and traffic cones that effectively privatise public roads, and thus compromise inalienable guarantees in the Bill of Rights.

The overt militarisation of post-apartheid suburban spaces in a country neither at war with itself nor under any foreign threat has become as normal as the smoke on the horizon viewed from apartheid South Africa’s suburbs.  If the children of apartheid’s white suburbs recall neat verges and pothole-free streets rather than casspirs and rubber bullets, the children of South Africa’s narrowly-integrated post-apartheid suburbs may in the future wonder what a satellite police station is, and why history textbooks refer to the insecurity of person and property which was a major political problem of times past.

It will be analogous to the way some white South Africans continue to misremember the cities of their childhoods in the 1970s and 1980s as being denuded of Black bodies.  Ideological investment has this power to blind, and to delete from view.  What the free children of post-apartheid’s suburbs may have in common with the oppressed children of apartheid’s townships, is having grown up with the ubiquity of armed men on the street, of razor wire always within view, and of security patrol who profess to be there to guard you.

Ours are indeed, again, the best of times, and the worst of times, secure in comfort, and insecure about its sustainability.