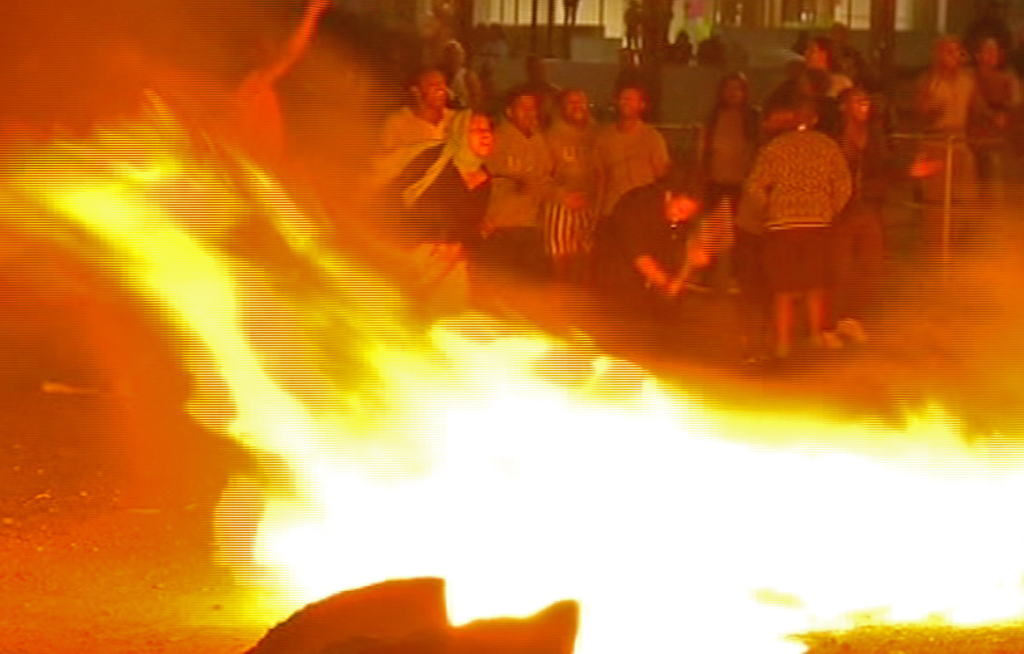 Eight protesters arrested during chaotic demonstrations at the University of Cape Town on Tuesday have been released on bail.

‘The students are not rehearsing for a rebellion, they are engaging in resistance’ – Ulrike Meinhof (1968)

Too many South Africans have entrenched themselves in rhetoric which has been turned into creed. The middle class intelligentsia are no different; rather they seem more fully invested in sticking to their beliefs in the face of contrary evidence-based arguments. This is tragically evident in many of the public responses to the ongoing student protests across South African university campuses.

The prevailing view is that some among the student protesters are violent, and that such violence necessitated the suburban militarist responses from university managers. The internet is awash in vituperative comments, much of it deeply invested in racist tropes about Black people, or poor people, or young people.

From sites of privilege, whether suburban homes or corporate offices, many middle class South Africans and their apologists who aspire to their status, have been vocal in their condemnation of the violence they perceive on campuses. They decry the fires set, the damage done to buildings and installations, and have stated their anxiety that this could escalate and endanger human bodies and lives. Some managers have agreed with them on this.

Before commenting, many who style themselves progressive, have been at pains to distance themselves from acts they deem politically unacceptable. It has become obligatory, it seems, to disavow the destruction of property, the setting of fires, among other things, before one comments on the inequality in and mismanagement of higher education in post-millennial post-apartheid South Africa.

These gestures of self-legitimation are largely empty. They obscure the real problem at the heart of much of the engagement with student discontent over the past decade. This is a problem privileged South Africans have generally had with protests more generally in the country. The right to protest is respected, even cited as something to protect, but the mode and style, it is often insisted, must be acceptable and palatable to those invested in the supremacy of property.  This view often masks itself as a call for propriety.

But as people in one community after another have responded to questions about their conduct, they were not heard or attended to by those with the power and the political role to do so until they turned to violence. Students at one university in the capital indicated that they had been protesting about inequality and under-resourcing, mismanagement and unaffordability, for more than a decade, and that the issues had only been given national attention when students at universities with vocal middle class interests were affected.

Also, as many social scientists employed at the universities have been pointing out, what gets defined as violence, what is read as violent, needs to be re-examined. Dr Danai Mupotsa reflected how the ways protests had interrupted business-as-usual for many on campuses mirrored the daily experiences of many students outside the privileges of middle class heterosexual masculinity, people whose experiences have been that interruption and delay are the norm.

University managers responded to the call for the safety of ‘the majority’ of students from perceptions about the threat protesters posed by hiring private security firms’ personnel, costing millions. But a more virulent, disturbing, and deadly form of violence has been a problem on campus for much longer, and the response to femicidal violence and rape of women has been much less ‘kragdadig’.

Other criticisms of the protests and the protesters themselves are invested in some crude and crudely awkward views of the world. The protests are seen not as resistance to distressingly oppressive praxes which remain constitutive in post-millennial, post-apartheid South African higher education. They are couched as attacks on history and on culture. Even educated elites, people who don doctoral gowns and insist on professorial titles outside the academic processions, seem invested in rendering the protests, and especially the less palatable incidents in such protests, as attacks on civilisation itself, and as a result, shameful.

These are old postures; they are familiar to many of us who were alive during the protests against the apartheid regime, and especially, against apartheid education. The irony, of course, is that they are now also assumed, along with the habits of thought that come with such poses, by folks who were at the forefront of those late twentieth-century protests. From being young bodies in revolt, many of our generation have become suited defenders of the status quo.

It is telling what people will defend. Statues and a few paintings, some photographs and the over- and badly-policed vowel sounds of one language: these are suddenly &39;culture&39; or &39;history&39;.  Instead of remembering that we had forgotten to think of what they celebrated, what they were meant to symbolise, we now suggest that we should simply reinvest them with new meanings.  As if the use of a collective first-person pronoun is not itself a rhetorical manoeuvre meant to mask our complicity with maintaining the order and orders young people are resisting.

This is, after all, the fortieth year since the Soweto Uprisings of 1976. We will be asked to celebrate the achievement of those young people, now in their later fifties and older. We will be asked to do so by a state (in both its public, government incarnation, as well as in its private, corporate formation) which is not only implicated in the inequality students are objecting to and want dismantled, but who are actively responsible for ensuring that the system is one of deep inequity.

Post-colonial irony, post-millennial cringe, inspired by the stale postures struck by those who are quick to condemn students for damaging or destroying items that mark ‘history’ and ‘culture’. But of course, on at least one campus, the removal of struggle era graffiti in the late 1990s, and of a mural in the old Students’ Union building, was not seen as the erasure of history; it was seen as a cleaning up.

But many of us who researched and taught at such universities know that these paintings and photographs and statues are texts which reveal something about our past. We are not keen to see them destroyed, but we are also not keen to see them remain as memorials to the grand past, touted as the achievements of some which continues to fuel misperceptions that ‘culture’ and ‘civilisation’ take on a specific face, exclusively, and that those were brought here from elsewhere. We also know they are memorials of systematised, engineered inequality and deprivation, violence and violation, dehumanisation and its cover, historical necessity.

The students are resisting old forms which no longer fit new times. They and many before them have been agitating for change for a long time. The system has chosen to adapt elements of the violating past, abolishing the truly unpalatable (racist legislation, for example) while keeping the spoils (an economic system exploitative of the bodies and minds and talents of the many to the benefit of the few) and declaring the mal-distribution of the present an accident of history or a fact of nature.

In this, the fortieth year since the 1976 revolt, which can be read as insurgency against colonial rule (apartheid, after all, was an extension and intensification of colonial rule, internally), it may indeed be important to reflect on the significance of that event.  But not inside the accommodationist terms of the State. It may be important to ask what was envisaged as possible in the insurgencies of the past, and what in the present abrogates the potential and aspiration from fulfilment.

We should beware of adopting old postures, tired habits of thinking, and of mistaking judgement for mere commentary. The students are resisting the status quo, and they are right to do so. We live in the most unequal society on the planet. We are running out of time and resources to put things right, and not repeat the mistakes of our own violent history in our violent present.