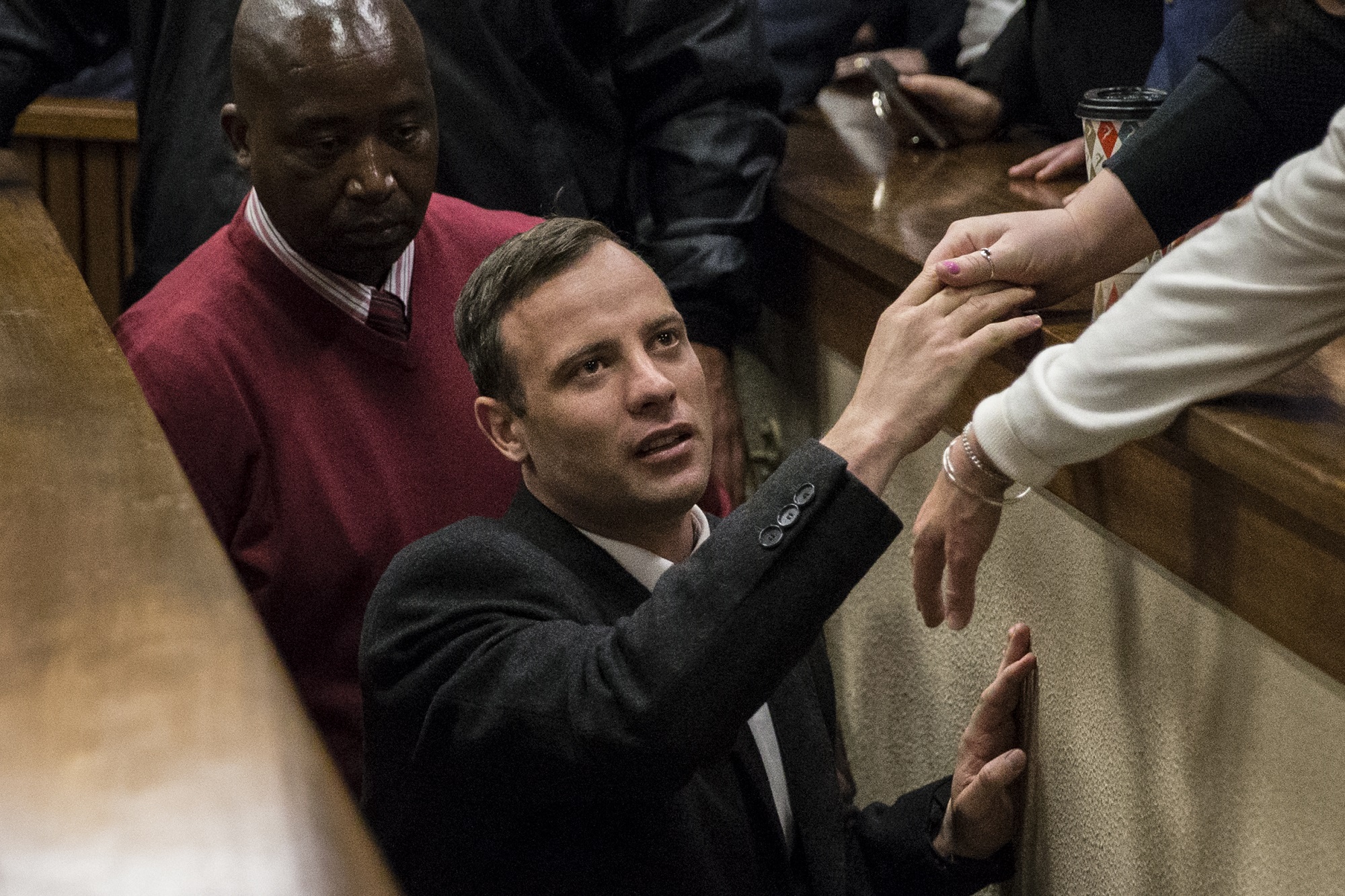 Oscar Pistorius leaves the High Court in Pretoria after he was sentenced to six years in jail for murdering his girlfriend Reeva Steenkamp three years ago.

The six-year sentence against disgraced Paralympian Oscar Pistorius for murdering his girlfriend, Reeva Steenkamp, has sparked controversy. South Africans and the world are split over the fairness of the sentence handed down by High Court Judge Thokozile Masipa. Some feel it’s too lenient while others are of the view that justice has been served. The Conversation Africa’s politics and society editor, Thabo Leshilo, quizzed University of Cape Town Law Researcher Rudo Chitapi on the matter.

Please put the sentence into perspective.

In South Africa courts have a wide discretion to determine sentences in order to arrive at punishment that is not only fair and just. Punishment must also accord with constitutional purposes of criminal sanction. These seek to ensure that sentences are not just retributive but also rehabilitative and restorative.

Thus, while minimum sentence legislation in South Africa does prescribe that murder should carry a minimum sentence of 15 years’ imprisonment for a first-time offender, courts have a wide discretion to deviate. That is in keeping with the aim to be just where they find “substantial and compelling circumstances”.

In this case Judge Thokozile Masipa found (judgment still to be published) that the mitigating factors outweighed the aggravating factors such that “substantial and compelling circumstances” were deemed to be present, which justified an imposition of a sentence of six years’ imprisonment.

One of the key mitigating factors that played a role in this finding was Pistorius’ remorse. He had made several attempts at an apology to Reeva Steenkamp’s family. Also, in the immediate aftermath of the incident, he had pleaded to God and bystanders for the deceased’s life.

Is the six-year sentence for murder peculiar?

Although some people might feel that the six-year sentence is “too light” for murder, Judge Masipa’s account of her decision followed recognised and accepted principles of sentencing law in South Africa.

Discretion to decide a sentence plays a wide role in sentencing procedure. Nevertheless, courts have held that the discretion afforded to judicial officers in sentencing is to be exercised judicially. That means judges are to exercise their discretion properly and reasonably.

Over the years, courts have developed guidelines that provide a framework within which their discretion is to be exercised. In order to arrive at a judicially appropriate sentence, courts must consider what in law is often referred to as the “Zinn Triad” – an appropriate balance between the personal circumstances of the accused, the seriousness of the offence and the interests of society.

In the Pistorius case, Judge Masipa indeed demonstrated a well-considered and determined engagement with those factors. What is perhaps most interesting about her judgment is her engagement with the third leg of that triad. She chose to address the matter of public perception in more detail.

The judge drew important distinctions between public opinion, which is often canvassed in media outlets, and the public interest, which courts are enjoined to consider.

She decidedly and somewhat emphatically found that not only does public opinion play a limited role in sentence consideration but it only matters in so far as it is based on facts tried, tested and found to be relevant in the court of law. She was emphatic:

Our courts are courts of law, not of public opinion. We should adjudicate without fear, favour or prejudice. Public opinion may be loud and persistent, but it can play no role in this case.

But it might still be said that the defence won a strategic litigation victory in making its representations about public perceptions in its address to the court.

What now for Oscar Pistorius?

Judge Masipa did not stipulate a non-parole period in her sentence. Thus, in terms of the law, he will be eligible for parole only when he has served at least half of his sentence.

The option to appeal the sentence is available to both the state and defence. What is clear is that it will not simply suffice to argue that Judge Masipa was wrong. Rather, for any appeal on sentence to succeed, it will have to be shown that the judge misdirected herself in exercising her discretion.

The misdirection will have to be of such a nature, degree or seriousness that it demonstrates that the judge did not exercise her discretion properly. Examples of such misdirection include instances in which the sentencing court has overemphasised the personal circumstances of the accused over the seriousness of the offence.

It remains to seen whether the state or defence will take this up. But it is clear that appeal courts are reluctant to disturb sentence findings of trial courts in the absence of a cogent misdirection. The sentence would have to have been “manifestly inappropriate” or “induce a sense of shock”.

In view of the revised verdict – the Supreme Court of Appeal set aside his previous conviction for culpable homicide, finding him guilty of murder – and the requirements for appeal, it seems unlikely that the defence will appeal. The state, on the other hand, has time – 14 days – to take stock and make a decision whether to appeal.

Sentencing hearings are unique in that they provide an opportunity to consider the complexities of deviance and criminality to which courts must be sensitive. Indeed, in her conclusion, Judge Masipa rightly acknowledged that a “determination of a sentence that satisfies every relevant interest is never easy”.