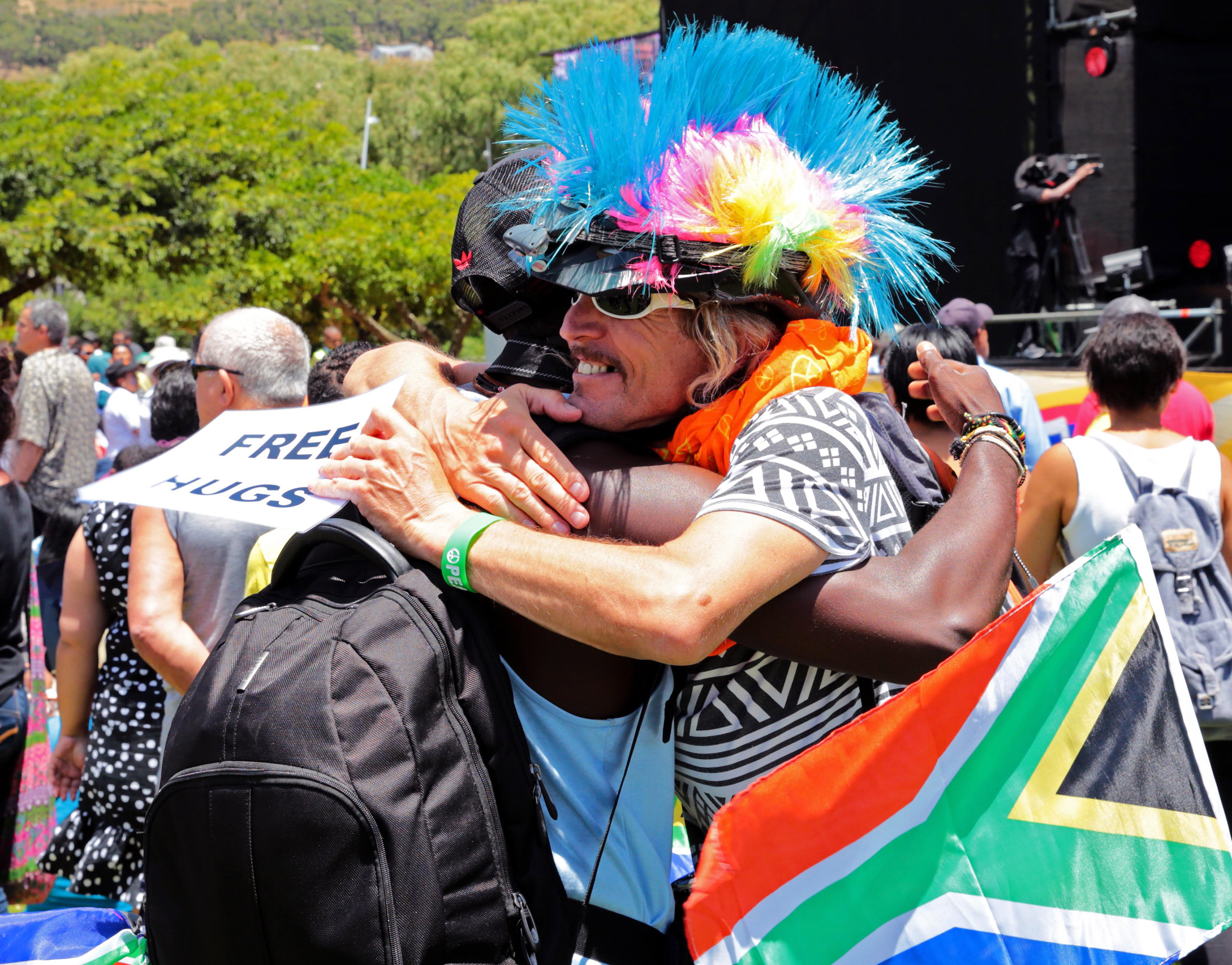 File: The 16th of December remains one of the most significant days in the calendar of post-apartheid South Africa.

JOHANNESBURG - The choice of 16 December to mark Reconciliation Day in post-apartheid South Africa is no accident.  During apartheid it was a religious holiday known as the Day of the Vow, commemorating the Voortrekker battle with amaZulu at Blood River in 1838.

It is also the day on which Umkhonto we Sizwe was founded in 1961. Reconciling people who hold the opposing worldviews of Afrikaner - and postcolonial Black nationalisms still seems nearly impossible.

As State President, Nelson Rolihlahla Mandela was at pains, and not always to applause, to reach out across the various political, cultural and social divisions to encourage South Africans to reimagine themselves as a cohesive nation, as a political group with common goals: freedom and dignity.

Tea with Betsy Verwoerd and visits to ‘verkrampte’ (socially and politically conservative) rural areas, and meetings with apartheid leaders, and even that now mythical 1995 rugby match, were not, as many now mis-remember, moments for Mandela to display his personal magnanimity.

These were important political gestures from the man who, in his first speech after release from prison, informed the crowds that he would put the remainder of his life in our hands, as a humble servant.

In this context, all South Africans may need to contemplate what is required to bring about reconciliation with substance.  And before we can assess reconciliation, its successes and failures in post-millennial South Africa, we may need to check the price of the ticket, as James Baldwin put it, and to examine the complex mathematical relationship between liberty, equality, and fraternity as reconciliation, as outlined by J.M. Coetzee in his 1987 “Jerusalem Prize Acceptance Speech”.

In the wake of recent defensive positions taken on behalf of celebrants of colonial genocide in the restaurant business, anodyne discussions about ‘white privilege’ (whether defensive diatribes against it, inane and indulgent pseudo-analyses of it, or the sarcastic dismissal of the very notion of whiteness as constituting anything at all, never mind privilege, in contemporary South Africa), one found oneself once again confronting the absurd sense of entitlement and over-confidence of middle class South Africans.

Just because people have opinions on things, and now have access to technologies which allow them to disseminate these into the ether, does not mean their beliefs and ideas have any rational or scientific validity, or that their contributions advance knowledge on the topic.

Many are bafflingly confident that they can discuss issues they do not understand, have not studied, and believe they can hector people who have paid attention and studied the issue in a systematised manner, and insist on being taken seriously in the conversation.

It used to be a truism that educated, middle class professionals would not do this on XDR-TB or HIV/AIDS, but even that is no longer the case. In post-apartheid South Africa, we have seen, premiers and presidents leap in where epidemiologists and virologists tread with care.

Columnists type out reams of material on topics they have merely Googled, at best, or at worst, have thought about for all of an hour, as if they are the first to do so, and as if there is not a long and rich tradition of scholarly and artistic material which may need consultation.

If one needed to understand the functioning and malfunctioning of the liver in order to understand some disorder in one’s body, taking a poll to determine the popular view would not provide one with the best way forward.

Furthermore, should one consult a liver specialist, and they recommended surgery, one would research the issue to make an informed decision, but hardly be debating the surgeon on how to go about their work during the surgery. The exceptional person could do that productively.  Mostly we would think such a creature mad.

Now, as before, but with greater confidence and with a rabidly loyal coterie of ‘fans’ in tow, many people do exactly that on "race" and racism, gender and sexism, and sexuality and homophobia, among other topics of political import in contemporary South Africa, and worse, as a rule.

At times they will even deny and reinvent the historical record to defend a class-mate or a friend who denies anything from Khoi massacres through to Rhodes&39;s horrors.

This year we have observed the explosion of Facebook law experts and Twitter epidemiologists. Once confronted with the shortcomings of their views, their inaccuracy and the fact that they are uninformed by credible and informed reflections, they project "bullying" as an accusation, choosing to believe that on such matters there can be resolution by ‘agreeing to disagree’.

Do they agree to disagree with an astrophysicist about ‘dark matter’, or with a neurosurgeon about the role of specific parts of the brain in speech interpretation? Yet, they happily believe that they can be experts on issues they are neither politically committed to nor intellectually capable of grasping. The bathos is overwhelming and dispiriting.

Recently, the discussion about ‘race’ and racism has once again had to confront the issue of whiteness as a specific, racialized position. This led to discussions of the privileges afforded to white people in a society which has yet to undo the world made by centuries of colonialism and decades of legislated white supremacy. Some felt that any consideration of whiteness, whether as a specific position, or as a site of privilege for those who claim it or are so situated, was both misguided and indulgent in post-apartheid South Africa.

Such dismissals refuse to engage the material realities of contemporary South Africa, choosing to flatten out the debate by insisting that because there is a majority-Black government, whatever power and resources white people had accrued under colonialism and apartheid play no significant role in contemporary social analysis. For such people ‘whiteness does not pay the rent in Illovo’; obviously such a person has never been denied the right to rent in Illovo because the owner wants white people in their property: ‘What a pity we’ve just let the property go.’

Also, the country we live in, work in, and play in, presumably then looks the way it does because of historical accident, manifest destiny, and mere ‘hard work’ explains current status and resource apportionment. The present is either accidentally the way it is, or the stuff (material, symbolic) people have now does not come from the outrageous acts of raping and pillaging of those before us.

If hard work alone explains current resource distribution, logically and morally explain why those who work hardest at the bottom ends of all enterprises have access to the least benefits in the enterprise and system?

But even the country they imagine themselves living in bears little relation to the material world the majority inhabit. On their social media platforms they will decry racism, signalling their disgust at the model who urinates on a taxi driver, or the East London youths who kicked and beat a working class cleaner in a parking lot in Claremont, or the SANDF dentist who whipped a gardener running to work, or the cyclist and swimming teacher who slapped a domestic worker for thinking she is a prostitute, or the man who attacked a fellow-motorist with an axe, or the neighbourhood watches who police suspicious people on their streets with racialized codes to the extent that they mistook a priest tying her shoelaces for a drunk homeless woman.

Many of us do not need occasional reminders that we live a country where the majority of the people are Black in a variety of ways, nor do we need to construct lives to work around that fact.  Our weddings, birthdays, offices parties, school prize-ceremonies, family gatherings, funerals, when captured in photographs, look like they happen in South Africa, not Sweden, not Belarus.

Also, it is not the duty of Black South Africans to teach white South Africans how to deepen their understanding of ‘race’, racism, and racialised privilege; our foremothers and forefathers have spent centuries cleaning the homes and bodies of white folks; how much more free labour are we expected to perform?

This is also disrespectful of the work of white anti-racist activists and scholars, who have tried to chart a way through this mess. Some work needs to be done by oneself, on oneself.

Racism and privilege cannot be wished away; it takes hard work which follows from introspection, reflection, and then making the gargantuan effort to overcome a lifetime of socialization and continued peer pressure. And it comes at a price, which, on the face of it, many white South Africans seem unwilling to pay, or even to contemplate calculating.

We cannot still be asked to engage a provincial premier and her acolytes on their late arrival in a discussion about the matter of Black lives and their value in a global conversation between Black people from Africa and its diaspora.

They may not have anything of value to contribute by way of instruction to the rest of us. Perhaps some of those who want to tell Black people how to value their lives better should look to their assumption of white privilege when doing so, and when asked to discuss white privilege, think about pausing before denying that such exists, or that it applies to them.

We don&39;t have time for such self-delusion in contemporary South Africa, no matter how much it allows people to sleep better at night. There is important work to be done to make a country unlike the one we left behind for the old age of the majority of the people who live here.

After all, it is too easy to profess to love the land (a refrain of sentimental South African jingoism), but not the people who are the majority in it.