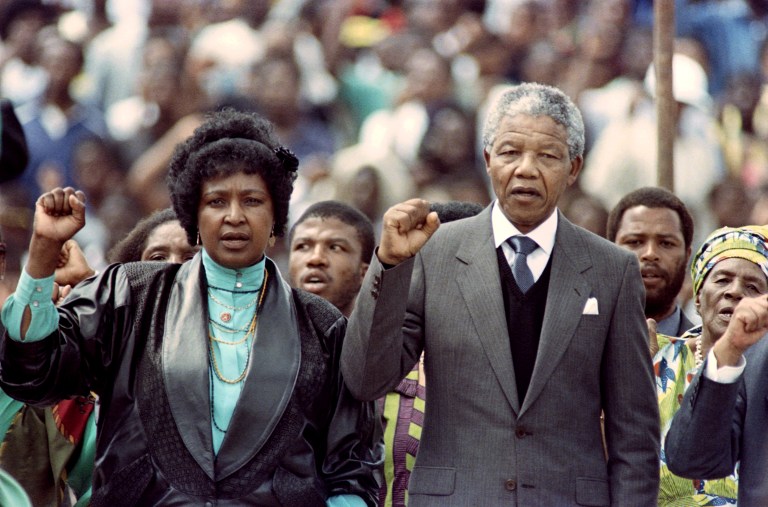 Anti-apartheid leader and African National Congress member Nelson Mandela (R) and his then-wife Winnie (L) at Soweto Soccer City stadium during a rally on February 13, 1990 attended by over 100,000 people to celebrate Mandela's release from jail on Feb 11

With the country already in the paroxysms of election fever, it will be quite understandable when some events of national importance fall under the radar because they are not “sexy” enough to warrant newspaper column centimetres or hours of radio or television airtime.

One of the events which unfortunately fit this category was last week’s commemoration of 25th anniversary of the December 1988 signing of the Brazzaville Protocol which took place along the humid, sun-baked banks of the river Congo.

Far be it from me to suggest that the signing of the accord was the single most important  contributor to the final demise of apartheid, or the rewriting of the history of southern Africa.

But, as Mathews Phosa told me at the commemoration in Brazzaville last Tuesday, the signing of the accord set in motion something akin to a game of dominoes, where one thing led to another – and the climax of it all lives with us to this day.

“The accord came at a time when our country was in flames. The ANC had rendered the country ungovernable, but the government was also fighting – their troops being based in Angola. But no one was winning. Something had to give,” said Phosa.

The signing of the protocol was an occasion when “peace was imposed upon violence”, said Phosa.

Phosa was at the celebrations in Brazzaville in his capacity as a participant in Plot for Peace, a documentary produced by Mandy Jacobson of the African Oral History and the Ichikowitz Family Foundation.

Plot for Peace features interviews with key figures of the time, including the former First Lady of South Africa, Winnie Mandela; former South African president, Thabo Mbeki, former South African foreign minister, Pik Botha, and Jean-Yves Ollivier, the French businessman who played a behind the scenes role in getting the Cubans to speak to the South Africans.

Businessman Ivor Ichikowitz said: “The end of the war in Angola, led to the independence of Namibia. The climate thus created was ripe for the release of Mandela, and the inevitable collapse of apartheid,” he said.

On September  10, 1986 Fidel Castro, who had sent in the region of 50 000 troops to Angola, undertook to withdraw from Angola on condition that South Africa relinquish control of Namibia.

At Cuba’s instigation, the Angolan and American governments then began negotiating in June 1987, with Cuba joining a year later. This culminated in yet another round of negotiations that took place on March 9, 1988 in London.

The South African government joined negotiation on May 3 and the parties again met in June and August in New York and Geneva. On August 8, 1988 they agreed on a ceasefire.

Unita and South African forces clashed with an MPLA advance on regions controlled by Unita – this culminating in the Battle of Cuito Cuanavale in Cuando Cubango province from January 13 to March 23, 1988, in what has been slated by historians as the second largest battle in the history on African soil since World War II.

When it was finally signed on  December 11, 1988 by foreign minister Pik Botha on behalf of South Africa,  Cuban vice minister of foreign affairs Ricardo Alarcon and Antonio Franca N’Dalu, the then vice minister of defence of Angola, the accord held the signatories to the following goals:

* the withdrawal of Cuban and South African troops from Angola (the Cubans had been fighting alongside Angolan government forces against Unita, which was backed by apartheid South Africa);

* the implementation of UN Security Council Resolution 435 on southern Africa, culminating in the independence of Namibia;

* the end of apartheid;

* the birth of a new South Africa;

* the release of Nelson Mandela

It indeed would be folly to suggest that it was the signing of the accord that led to the release of Mandela. There were many forces at play, and the accord was one just one of the pieces of the game of dominoes, to use Phosa’s imagery.

Mandela had in the past been made offers for his release by PW Botha. But there had been conditions. One of these was that he should unequivocally renounce violence as a means to ending apartheid.

When FW de Klerk took over after the famed palace putsch, he bravely took the Mandela issue a step further. Again, it would be foolhardy to give him all credit for this. International pressure had been made to bear. And the cessation of hostilities in Angola had created in southern Africa an environment where a negotiated settlement – held in all sincerity – was possible.

It is against this background, then, that when President Jacob Zuma spoke at the ceremony on Tuesday, he unequivocally thanked those African countries – especially the erstwhile Frontline States – who gave moral and physical support to the struggle that finally vanquished the apartheid regime.

Zuma said: “The Brazzaville accord is a historic and memorable occasion in the history of both republics of Congo and Angola, as well as the people of Namibia, South Africa. An important milestone… a building block leading to a resolution of conflicts in southern Africa through dialogue.”

He thanked leaders of many African countries who sacrificed the safety of their own countries to help the liberation movement create its bases within their borders.

Zuma particularly thanked Congolese president Denis Sassou N’Guesso who, in his capacity as secretary general of the Organisation of African Unity (OAU), created the Africa Fund meant to ameliorate the damage done to the economies of southern African countries that had cut their diplomatic ties with apartheid South Africa, offered succour to the liberation movement, and bore the brunt of occasional attacks by the SADF.

Zuma hoped that the Brazzaville Accord would serve as inspiration of Sudan to find a solution for the conflict that has rent that country apart, with devastating consequences not only for the citizens of that country, but also for neighbouring countries and their economies.

While it is easy to succumb to the palatable myth of the miracle that befell South Africa in 1994, let’s not lose sight of the other strands to this yarn.

As the unfolding events in our country rudely remind us every day – the countless service delivery protests, endless revelations of graft in the public sector – we are not special. We are a product of history. We are part of the southern African patchwork quilt.  Like any patchwork quilt, there are some bright spots; and there are some fragile, loose ends that need to be taken care of. Or the entire quilt disintegrates.

The commemoration of the accord was to have happened on December 11 last year, but had to be postponed to a later date after the death of Nelson Mandela six days earlier. It was then celebrated on Tuesday, to coincide with his February 11, 1990 release from prison.

Zondwa Mandela, one of Mandela’s grandsons, delivered an impassioned message on behalf of Winnie Mandela and family thanking the president of Congo Brazzaville, Denis Sassou-N’Guesso for taking charge of, and offering the venue for the signing of the accord that speeded up the release of Nelson Mandela from prison.

The potency of the symbolism behind that message from Winnie Mandela cannot be overstated. It’s a message that should be a constant reminder of our place in the geopolitics of the southern African region.