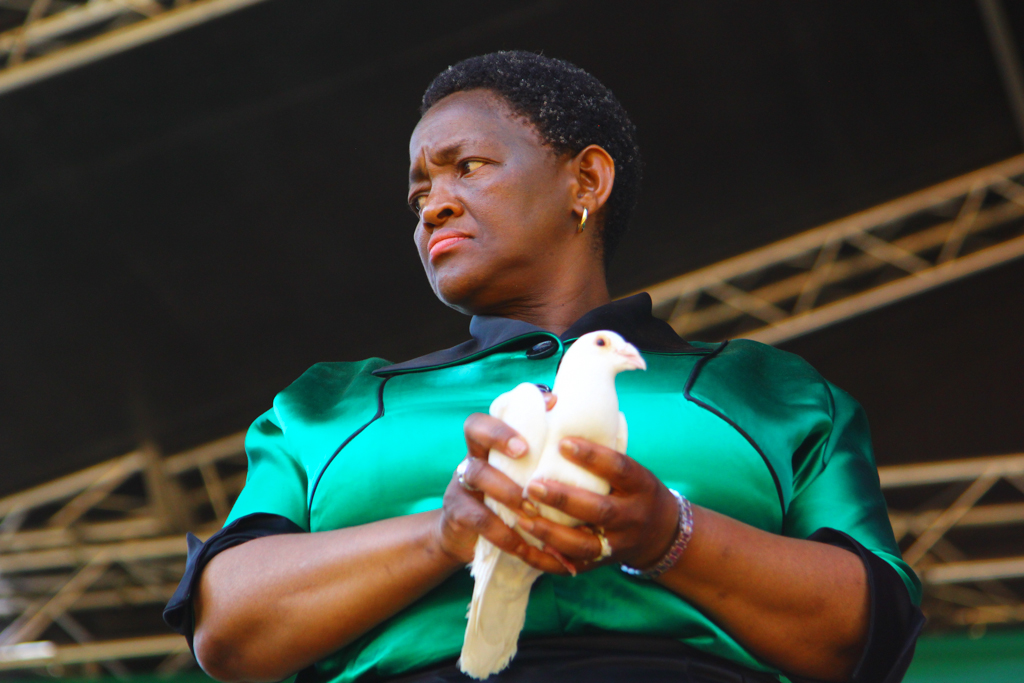 On Thursday, Corruption Watch and Cosatu called for Minister of Social Development Bathabile Dlamini to be sacked for her role in the self-manufactured emergency with regard to the payout of social grants from April 1 while Scopa has summoned her to appear next week to account for the crisis.

Meanwhile, officials in her department are scrambling to put an emergency Plan B in place, saying if needs be, trucks transporting cash would be dispatched across the country should negotiations with CPS deadlock.

The Reserve Bank has called on the agency to make an urgent decision while Cosatu on Thursday also described the fiasco as “a political own goal that smells of corruption”.

Minister in the Presidency Jeff Radebe said Cabinet is only set to deal with the matter next week. In the meantime, tensions are running high while little or no leadership is being offered.

The cameras inside Parliament’s committee meeting rooms where Minister Dlamini (when she has bothered to pitch) as well as Sassa officials have been called to account to MPs with regard to Sassa’s readiness to take over the disbursement of grants to 17-million South Africans on April 1, seldom pan to the rear of the venues.

At Tuesday’s disastrous presentation by Sassa and Department of Social Development officials to Scopa, a small battalion of activists from advocacy groups the Black Sash and Right2Know sat silently observing the briefing, providing a stark reminder of the real lives of those who depend on these grants for survival. Dressed in branded, well-worn T-shirts, the activists stood out from MPs in their crisp shirts, smart suits and dresses as they picked at a tray of snacks.

The Black Sash (formed in 1955 and instrumental in monitoring and highlighting injustice during the apartheid era) has been at the forefront, along with partners, in exposing irregular third party debit deductions from social grant beneficiaries.

In 2011 the Black Sash launched the Community Monitoring and Advocacy Project (CMAP) and in 2013, after a drastic increase in third party debit deductions from Sassa beneficiaries’ bank accounts, the Stop Sassa-CPS Debits Campaign. It has also repeatedly reminded Sassa that it was placing beneficiaries in a precarious position by not adhering to time frames set out in a 2014 Constitutional Court ruling for the insourcing of social grants payments.

In November 2016 the Black Sash warned:

“There cannot be any further delay in holding Sassa to account for what could potentially become democratic South Africa’s biggest national crisis.”

By March 1, with only four weeks to go, the crisis is about to get as real as it gets.

On Monday, the day before Minister Dlamini was due to appear before Scopa (a no-show on her part) the Sash filed an urgent application with the Constitutional Court in an attempt to prevent Sassa from extending the Cash Paymaster Services contract without the court’s supervision.

In its notice of application the Black Sash’s Lynette Maart requested that Minister Dlamini and Sassa file reports on affidavit on a date determined by the court, on “what steps they have taken, what steps they will take, and when they will take such further steps, to ensure that the payment of all social grants is made when they fall due After 31 March 2017.”

“Sassa had failed to do what it told the court it would do. Because it has inexplicably only acted upon this knowledge at the 11th hour, there is no longer any alternative but for it to contract CPS. It has thus created a situation in which there will be no effective oversight over what it does,” Maart continued, adding, “If Sassa had reported timeously and frankly to the court on its inability to do what it had said it would do, the court would not have abandoned the supervisory jurisdiction which it had established.”

The SASH said that due to Sassa’s conduct during current and previous litigation it was imperative that the court offered oversight as “events indicate that whatever oversight the minister (Bathabile Dlamini) is able and willing to provide cannot be relied upon to be adequate”.

While officials from Sassa, the Department of Social Development, the South African Reserve Bank and Treasury were reportedly meeting with CPS – whose share price spiked on Thursday, reaching a 12-month high – Minister in the Presidency, Jeff Radebe, in his post-Cabinet meeting briefing on Thursday, said that Cabinet would be meeting next week “to deal with the complexities of the issue”.

Cosatu secretary-general, Bheki Ntshalintshali, speaking after a central executive committee meeting on Thursday, called on President Zuma to intervene in the crisis and fire Dlamini if needs be. He also said the matter was not only due to “administrative bungling but a political own goal that smells of corruption”.

ANC Women’s League Secretary General, Meokgo Matuba, hit back in a press statement afterwards stating that Cosatu’s claim was “just populist posture driven by some CEC members of Cosatu who have abonded (sic) their duties of strengthening and building worker control-Cosatu where workers control the structures and committees of the Federation”.

“If Cosatu is prepared to lay criminal charges for CEO’s (sic) of companies involved in collusion, what stops them from laying charges on the alleged corruption on Sassa-CPS matter? It is the ANCWL’s view that the grandstanding posture of claiming ‘smell of corruption’ is mainly driven by some in Cosatu leadership that have uncontrollable ambition (sic) to be deployed into ANC led government positions which includes cabinet positions in parliament.”

Scopa committee chair, Themba Godi, announced that Minister Dlamini, who earlier this week said she did not have to account to the committee on public accounts, would be called to appear on Tuesday next week.

DA Shadow Minister of Social Development, Bridget Masango, said Radebe’s announcement that Cabinet would discuss the matter next week was “an outrageous abdication of responsibility and it should leave every South African angry. With just over three weeks left until the deadline, this clearly demonstrates just how little the ANC Cabinet cares about the 17-million vulnerable South Africans that depend on social grants as a lifeline.”

Masango also called on President Zuma to “hand over the negotiations of the grants payment process to Minister of Finance, Pravin Gordhan”.

“The organisation views the proposal by Sassa to extend or renew a contract with Cash Paymaster Services (CPS) in a serious light, particularly following the Constitutional Court’s judgment that the award of the tender was invalid, and riddled by administrative irregularities which, in the words of the court, are to be treated seriously because they may ‘betoken corruption’.”

Lewis asked why the Hawks had never taken up the Constitutional Court’s “effective invitation to investigate the underlying reasons for the flagrant administrative irregularities” and added that “it shames our law enforcement authorities to note that the US Department of Justice (DOJ) investigated CPS, a US-listed company, while our own authorities sat on their hands and did nothing”.

The US investigation remains “open but inactive because of the failure of our law enforcement authorities to support their investigation”. said Lewis.

He added that Corruption Watch noted that in 2008, Advocate Norman Arendse, who was then chairman of the adjudication committee for the CPS tender, had alleged, under oath, that while he was deliberating the tender, Gideon Sam, who claimed to represent CPS, had made a statement about having “an open cheque book”.

Lewis also noted “the shadowy role played by the President’s legal adviser, Mr Michael Hulley as a ‘strategic advisor'’ to Sassa in the adjudication of the R10-billion contract” and, asked Lewis, why was Sassa unable to produce a contract with Hulley or proof that he was remunerated, who was paying him and who he was representing.

“This is arguably the most serious scandal to emerge in democratic South Africa. At stake are the lives of the most deprived people in South Africa. Dlamini and Sassa have ensured that the only realistic option for ensuring the grants are paid is a further contract with CPS.”

On Wednesday, the South African Reserve Bank as well as Sassa and Department of Social Development officials reported back to Parliament’s portfolio committee on social development. The minister also failed to attend this briefing.

Pressed by MPs, Social Development DG, Zane Dangor, said one alternative strategy should negotiations with CPS be unsuccessful would be to pay out grants through banks as at least 90 percent of beneficiaries had bank accounts. For those with bank accounts and Sassa cards, an option was to use Postbank outlets, but this would mean moving these beneficiaries from biometrics to PIN.

If all else failed, said Dangor, “We will do what we have done in exceptional cases in the past. It is risky, but it has been done before. It is to take cash directly on trucks and pay people. That option will be deployed if all else fails. We don’t foresee that happening, though.”

(NB: Putting things into perspective – even if Dangor is correct, and 90 percent of grantees indeed have bank accounts already, that would leave 1.7-million people without guarantee they could eat after the April 1; if one considers that most of them have dependents, that number can grow to 5-million people placed in life-threatening danger. The scale of such a catastrophe is difficult to fathom.)

There is clear tension between officials of the department as well as in Sassa who are genuinely desperate to prevent a catastrophe and find a solution before April 1 but who appear to be thwarted at every turn by an absent minister who has been neither transparent nor accountable with regard to Sassa’s relationship with CPS.

It is believed that Minister Dlamini might soon be travelling to New York to attend the 61st session of the UN’s Commission on the Status of Women which takes place from March 13 to 24 (about a week before the March 31 expiry of the CPS contract). Considering that the vast bulk of social grants go to women, and particularly older women in South Africa, it might be prudent for the errant minister, should she be considering attending the New York conference, to concentrate rather on the status of women in her own country and at least allowing the other people to solve the crisis she has been instrumental in creating.