The strange tale of Ramaphosa and the Gupta's jet 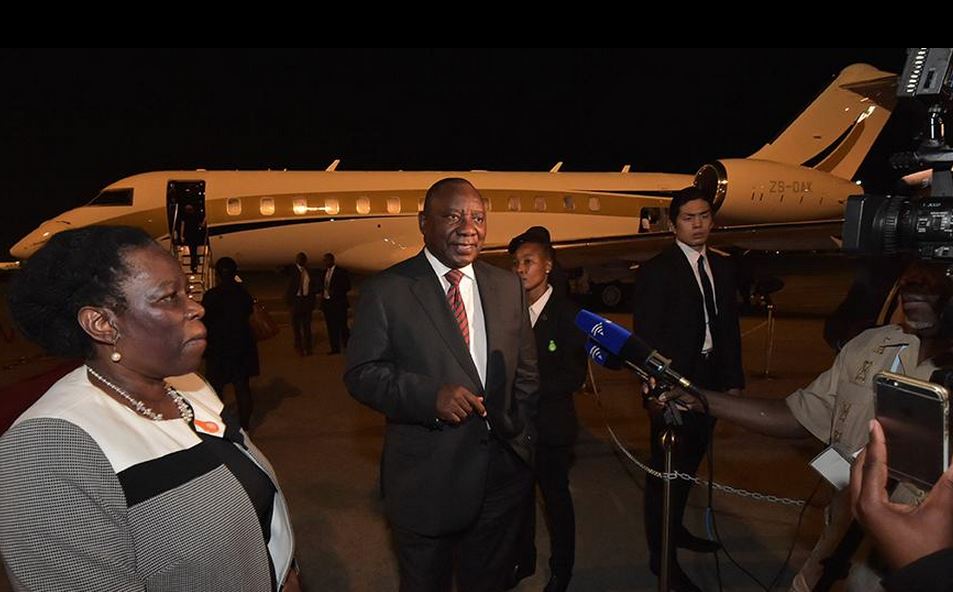 Deputy President Cyril Ramaphosa arrives in Japan on a working visit. Behind him is the plane chartered by the Department of Defence from Execujet.

I find Cyril Ramaphosa to be an endlessly reassuring deputy head of state. When he speaks, I feel that it’s possible that there is a possible future for our country in which issues are confronted and solutions found.

Already, whenever there’s a serious cause for concern, it’s Ramaphosa who speaks out and acts appropriately, while President Jacob Zuma is relegated to delivering rhetoric.

Ramaphosa has hinted at private investment in underperforming state-owned enterprises, he acknowledges that Eskom’s faulty provision of power is a deterrent to investors, he will be instrumental on a committee examining the crippling impact of South Africa’s new visa regulations.

But the thing that I find most reassuring about Ramaphosa is his reported $700 million in personal wealth. Without knowing the man personally, it’s hard to say whether or not he is an ethical person, but the fact that he has $700 million to his name suggests that he’s less likely to raid government coffers in pursuit of wealth. He’s got that covered.

In addition, he came by that wealth by being a canny businessman whose interests seem to operate transparently and soundly, and will continue to deliver returns for him, whatever his political status.

Of course, we’re having to turn a blind eye to his involvement in Marikana, which is a pretty big ask, considering this is one of the darkest events to afflict our country in recent years. His lack of sympathy for the strikers – a segment of society that he historically supported – is telling. I do, however, doubt that he signed their death warrant.

Marikana notwithstanding, in Ramaphosa, we have someone with the right credentials, intelligence and insight to be president. I hope we will see him in that role one day. But then, he goes and does a thing like this.

He and a delegation flew to Japan in a jet owned by the Gupta family. The Guptas have many ties with the ANC government in general, and President Zuma in particular – the president’s son is a co-owner of their Westdawn Investments, the company in whose name the jet is registered.

Now, Ramaphosa did not benefit directly from the trip – it had very cogent diplomatic justifications, and he was required to get from here to there on something. I also have no idea what the procedures are for leasing a jet and whether the deputy president would have been made aware of the origins of the aircraft carrying him.
But it would be really great if at some point, someone up there said, “Enough with the overtly corrupt behaviour and the not giving a damn. Let’s not lease a jet from a family that’s mates with our president, tied into accusations of corruption, and in a business deal with the president’s son. Let’s just not do that.”

I have also heard suggestions that Ramaphosa fly on the national carrier, as some other country’s presidents do. While that would be a hugely inspirational move at a time when we’re in need of such things, I accept that Japan is a long-haul destination and that political leadership should benefit from some levels of comfort while carrying out state business.

But the Gupta jet, guys? Seriously?

In the greater scheme of things, this is not the worst misstep in gubernatorial decision-making. And it’s important to remember that Ramaphosa must also tread lightly to retain the favour that’s got him where he is today. So while it would be great to have him taking a stance and rejecting the spoils of the presidential upshacking with the Zumas, he also has to toe the party line – and right now, that line’s ethical path is a meandering one with obscure destinations.

I hope we will have future opportunity to see Ramaphosa set his own direction and lead us out of this current turmoil.