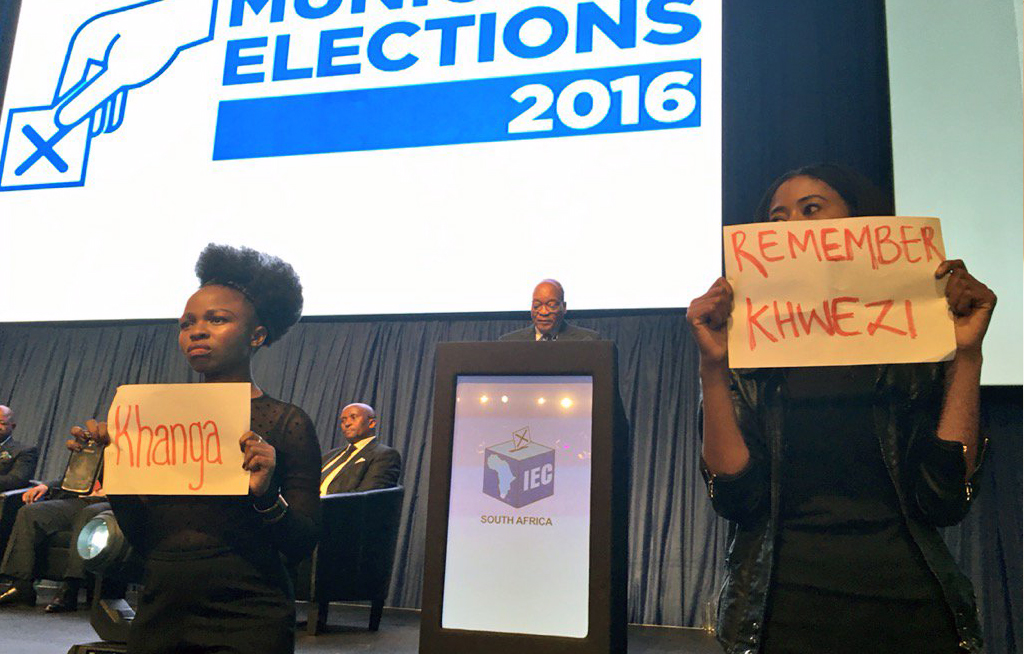 What we need from leadership is that they read the “signs of the times”, that they tell us, without sparing what is wrong with the present and what they see as necessary for the future.

We need a political vision that is based on a conception of justice for all, especially the long denied justice to the most vulnerable and the poor. Given where we are now, such a vision must also incorporate everything that is needed to undo what has undermined our lives over the period that the Zuma misfortune has been visited on us.

The Zumamustfall movement has taken various forms, while agreeing on the call for President Jacob Zuma to resign. Prominent figureheads and veterans of the struggle featuring in such calls have been remarkably silent about the Zuma rape trial (with the only reported exceptions being Ronnie Kasrils and Judge Zak Yacoob in another context). But the trial was recently and dramatically brought into focus again by a demonstration of four women at the election results centre.

My belief is that the lessons of that trial have a bearing on the type of future leadership we must seek, and it does not serve us well to simply refer back to a supposedly untroubled golden age of the ANC that needs to be recovered. Part of what any vision needs to incorporate, is a critical look at the ANC past, for it is out of the loins of this organisation that it was possible for a man with Zuma’s qualities to emerge.

When we consider the removal of Zuma, it is important that we are clear about what we want in his place. We must also draw adequate lessons from what his rule represents, and the range of practices that were colluded in by those who brought him into power and those who continue to endorse what he does.

In calling for him to go we need to speak the truths that have been suppressed about what he and others have done, in many cases as representatives of the ANC or the state that speaks in our name.

In the normal course of events someone acquitted of a criminal charge should be left in peace and in some cases compensated for the wrong accusation. That does not apply even if Jacob Zuma were correctly found “not guilty” in his rape trial. The complainant could not appeal. That was the prerogative of the state, which did not do so.

His innocence remains ambiguous and his way of trying to establish it in the trial, as well as outside the court room, comprised patterns of behaviour that were themselves violations of democratic, constitutional, cultural and gender equality values that are meant to be held sacred in this country.

The demonstrations in his support, which he condoned or encouraged, were also aggressive violations of the right to democratic debate, intimidating those who supported the complainant or gender equality in general. The militaristic character of the demonstrations, egged on by Zuma’s singing a war song, Umshini wam’, meaning “bring my machine gun” but also carrying phallic imagery, served to deter any person who might dare to charge a high profile figure with rape.

To recapitulate briefly what happened in that trial. Fezekile Ntsukela Kuzwayo, (who revealed her name when reciting a poem in the Netherlands) then using the name Khwezi, was the complainant against Zuma, then the dismissed Deputy President of the country. In the atmosphere of the time, Zuma was seen by many to have been charged with rape as well as numerous counts of corruption as part of a conspiracy hatched by then President Thabo Mbeki in order to thwart Zuma’s ambition to be president of the ANC and the country.

The alleged conspiracy hovered in the background of a charged atmosphere with ethnic overtones, some of Zuma’s supporters wearing T shirts declaring him to be “100% Zulu” and a discourse referring to his being a victim of the “Xhosa nostra”. It should be noted that this ethnic mobilisation ran against foundational values of the ANC, from its original statements at its establishment, aiming to end inter-ethnic antagonisms and build a unified African people.

What happened in court? Was the trial fair to the complainant? Is it improper to raise questions about the trial? The complainant claims that on the night of the alleged rape Zuma, a man whom she regarded as a father figure, entered a room where she was a guest of the house and raped her. She did not say “no” because when she saw him naked in front of her she said she froze. This was dismissed by the judge who put himself in the shoes of what he thought would be the reactions of a genuine rape complainant, who would have “screamed the whole house down”, or called the policeman stationed nearby or Zuma’s own daughter, (who admitted in the trial to feelings of hostility to “Khwezi”).

According to much evidence, including a psychologist in the trial whose evidence Judge van der Merwe rejected, it is common for women who are taken by surprise and raped to “freeze” and not to be able to say “no” or anything, for that matter.

The meaning of silence is seldom obvious and univocal. Jacques Depelchin has eloquently explained in Silences in African history, that “silences are facts which have not been accorded the status of facts….The silence of the raped victim does not mean that rape did not take place or, worse, that it was sought”. These silences or repressed silences, he argues, are the result of power relations.

Much of Zuma’s evidence was based on depiction of himself as the bearer of an authentic (and essentialised) version of Zulu culture and masculinity. In some ways this dovetailed with the secondary rape experienced by complainants in other countries, when he depicted the way that Khwezi was dressed, in a khanga wrap, as an invitation to have sex. This fed into the “international convention” that responsibility for rape lay in the actions or dress of the complainant. But there were specific cultural dimensions with Zuma claiming that in his version of Zulu culture and masculinity, if he did not act on this “invitation” for sex, he would be in trouble and even be accused of rape.

Zuma denied Khwezi’s claims that he regarded her as a daughter and that she called him “malume” (uncle, my brother’s brother), this despite her knowing him from birth and his being the close comrade of her father, the late Judson Kuzwayo, prison and MK comrade of Zuma. Zuma’s version was accepted by the judge, as were his cultural explanations. These went totally unchallenged by what was a very weak prosecution.

The rape trial needs to be remembered, not only because of the multiple violations of Khwezi, who was pummelled in the witness box and by the judge (through revelations of her “sexual history”, questioning of her “mental stability”, accessing her private memoirs and other features, putting the complainant on trial) and outside attacks by demonstrators, who displayed her name and address and chanted, “Kill the bitch!”

It also needs to be remembered because of the damage done to our democracy in the broadest sense, damage that continues to this day. This ought to be incorporated into any vision of the future.

It is true that corruption, with which Zuma is so closely associated, is a cancer, but as this is being written the Marikana massacre is being remembered, one of the symptoms of an unchecked use of force, part of the militaristic masculinities celebrated as part of the support for and the actions of Zuma outside the court room during the trial. If one does not address the patriarchal character of Zuma’s rule, one cannot address the violent masculinities responsible for multiple acts of violence, including extra-judicial killings of various kinds.

Zuma’s representation of himself as an embodiment of Zulu culture also foreshadowed an important feature of the present. This entails the enunciation of static, essentialised versions of custom that are used to stifle debate and to delineate patriarchal norms of womanhood (properly realised through being a child bearer) and much else as “unAfrican”.

Ours is a country that needs less conflict and more debate in order to address complex issues of culture, identity and multiple ways of being. The rape trial set the tone for stifling this. Visionary leadership needs to contribute towards reopening the debate we need in order to build mutual respect and solidarity between all our people.

Raymond Suttner is a scholar and political analyst.  He is a former political prisoner for activities in the ANC-led liberation struggle. Currently he is a professor attached to Rhodes University and UNISA and his most recent book is Recovering Democracy in South Africa (Jacana and Lynne Rienner, 2015). He blogs at raymondsuttner.com and his twitter handle is @raymondsuttner