Throw Them Under The Bus 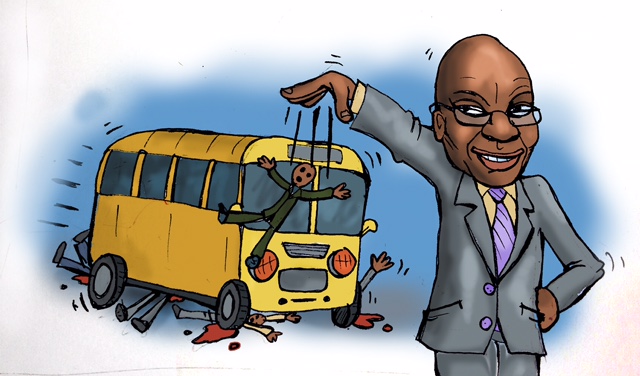 "Throw them under the bus"

Throwing someone under the bus. It’s suddenly become a ubiquitous phrase in everyday conversation.

Implied in it is sacrificing or betraying others to save one’s own skin or to further one’s interests -  the behaviour being reserved for those previously closest and dearest, not random strangers.

Trying to establish its origin took me all over the place. Suffice to say it appears to be an Americanism that has wormed its way into our idiom.

I wondered why, if the intention is to dispatch a friend turned foe, we would use a bus. A train would surely do a more efficient job?

Legend has it that the person with the most impressive list of victims thrown under the proverbial bus is none other than the president himself.

Take this clip from the Sunday Times at the weekend, reviewing last week’s events in parliament: “Individually and off the record, ANC MPs are actually very outspoken, although many are inhibited by the belief that their phones are tapped. There is a climate of fear in the caucus. We do not know who the president will throw under the bus next…”

And it’s not only human beings that Number One is wont to give the bus treatment, if a columnist in the City Press of the same day is to be believed. Talking about the role of Police Minister Nathi Nhleko in the Nkandla controversy, the scribe announced: “After having his report and its accompanying movie to whitewash Nkandla thrown under the bus by Msholozi, he was back this week…”

This after respected constitutional lawyer and political analyst Richard Calland had led the charge a few days earlier in the Mail and Guardian.

Reviewing the balance of forces on the ANC’s national executive committee, Calland wrote: “The commonly held view is that the Zumists (sic) are still in the majority there. But that, too, may be changing, as individuals look further ahead and consider their own political futures. Having thrown so many loyal apparatchiks under the bus over Nkandla, Zuma may no longer be able to count on their fidelity.”

The editorial writer in the same publication was not to be left out either, when discussing the president’s decision to defer to the Public Protector on Nkandla. Declared the writer: “His defenders – many of whom felt they had been thrown under the bus – were forced to do a U-turn too…”

So much throwing under the bus!

But, apropos the president, in politics it’s not a capital offence to betray people or causes which become a liability. Indeed, it can count as a sign of political astuteness.

What rankles is the parroting ad nauseam of the wretched phrase.

And so dear all, with tears in my eyes, I beseech.  Let’s rest it.  It’s so abused – it would be blunt as a spoon were it a knife.

The next time someone utters it, I myself might just throw them…