Welcome to the age of treason 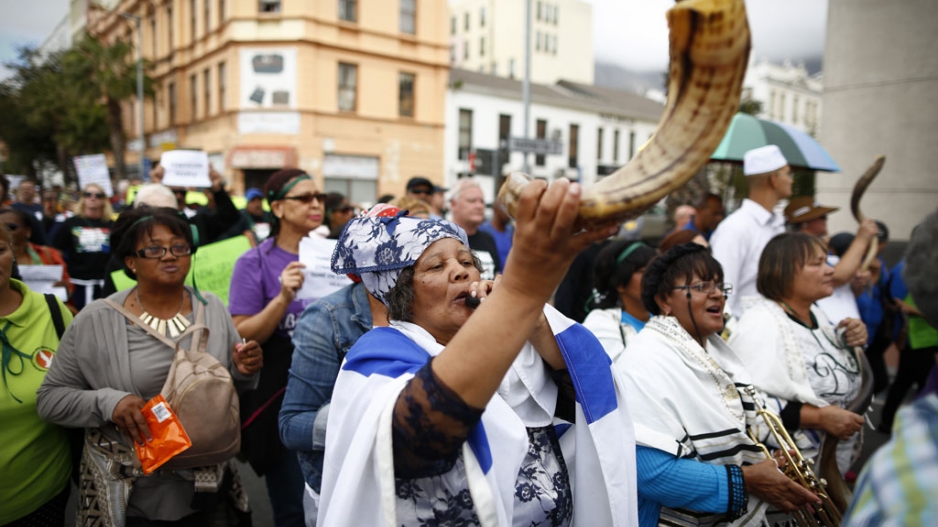 Thousands of South Africans take to the streets of Cape Town in protest against president Jacob Zuma calling for his resignation on Freedom Day public holiday in Cape Town on 27 April 2016.

A government’s threat of charging citizens, activists, students or politicians with treason is not to be taken lightly. It was for alleged acts of treason that Nelson Mandela and 156 others faced the death penalty during the marathon Rivonia trial in 1956.

It was during this trial that Mandela ended his statement in the dock with the now immortalised, “During my lifetime I have dedicated myself to this struggle of the African people. I have fought against white domination, and I have fought against black domination. I have cherished the ideal of a democratic and free society in which all persons live together in harmony and with equal opportunities. It is an ideal which I hope to live for and to achieve. But if needs be, it is an ideal for which I am prepared to die.”

Twenty-two years into democracy and nearly three years after Mandela’s death, the air is again thick with political paranoia, with talk by the Minister of State Security, David Mahlobo (and others), of high treason, common or garden treason, sedition and betrayal, with talk of mysterious foreign forces or agents who have “infiltrated” the mass media, business, foreign multinationals, NGOs, religious bodies, opposition parties and student movements and who supposedly threaten the state or wish to destabilise the country.

To those of us with long memories, these statements are chilling.

In October 2015, six UCT students who were part of mass protests outside Parliament were arrested and taken to the Hawks office in Bellville where they were charged with trespassing, illegal gathering and high treason. While the Hawks flatly denied that the students were being charged with high treason, police paperwork clearly showed this to be true. The charges were later “deferred”.

On Saturday the ANC lodged a charge of treason at the Hillbrow police station against EFF CIC Julius Malema after his comments during an interview with Al Jazeera that he was prepared to overthrow the ANC-led government “through the barrel of a gun”. Minister of Police, Nathi Nhleko, has subsequently confirmed that the Hawks are investigating Malema.

During his interrogation by the Hawks after his arrest at OR Tambo on 1 April, forensic investigator Paul O&39;Sullivan too was threatened with a charge of treason. O’Sullivan has spent the better part of the last 10 years collecting evidence of alleged corruption by high-ranking members of the SAPS.

But what is treason, high treason, and who might be guilty of it?

First, only an individual who owes allegiance to a state can commit treason against that state. All citizens of South Africa, whether by birth or naturalisation (including the Gupta family), owe allegiance to the state, as do foreign citizens who are resident in South Africa, because they enjoy the protection, the infrastructure and the services of the state.

In South Africa, high treason is a common law offence defined (see SAPS website) as “any conduct unlawfully committed by a person owing allegiance to a state with the intention of; overthrowing the government of the Republic; coercing the government by violence into any action or inaction; violating, threatening or endangering the existence, independence or security of the Republic; changing the constitutional structure of the Republic.” The SAPS definition of treason is modelled on a “meticulous and comprehensive judgment” delivered by Judge Gerald Friedman in S v Banda and Others 1990 (3) SA 466 (BG).

And so, while treason is now the topic du jour, might revelations by former ANC MP Vytjie Mentor, Deputy Minister of Finance Mcebisi Jonas, and former head of GCIS, Themba Maseko, that the Gupta family had offered them ministries or had made requests to direct state finances in their direction, not amount to exactly that?

If these revelations were tested in a court they would most certainly be found to be a violation of the Constitution and the Corrupt Activities Act, but would they amount to treason?

Might these allegations of “state capture” by No1’s BFFs not fall neatly under Friedman’s definition of “violating, threatening or endangering the existence, independence or security of the Republic” or “changing the constitutional structure of the Republic”?

And would those who knew of these treasonous acts but who refrained from informing the authorities also be regarded as having taken part in a treasonable act?

If someone lodged a charge against the Gupta family and those who might have aided and abetted them, could we rely on the Hawks to investigate it?

But as we know too well from the past, one individual’s treason might be another’s defence of liberty.

In the S v Banda and others case, motive was irrelevant in the commission of treason. The key element is “hostile intent”, which can be present “while achieving some further purpose, such as economic advantage, or the fulfilment of personal ambition”.

The court in this instance quoted LAWSA vol 6 para 171: “Once it is proved that a person knew (whether by dolus directus, indirectus or eventualis), that by striving to fulfil his aim he would impair or endanger the existence, independence or security of the government, the necessary hostile intent is established.”

The first person convicted of treason in post-apartheid South Africa was Boeremag leader Mike du Toit who was found guilty in 2012 of plotting to overthrow the government and sentenced, with four other leaders of the right-wing organisation, to 35 years. The trial lasted a decade.

But it is pre-election season and talk in South Africa has become increasingly incendiary. On Monday Mahlobo accused South Africans and NGOs of “collaborating with foreign forces to destabilise the country”.

“Not everybody is our friend. The forces that are opposed to us are hard at work. Our NGOs play an important part in South Africa, but there are those who work to destabilise the state,” Mahlobo claimed during a State Security Department budget vote in Parliament.

Sounding much like apartheid-era securocrats, Mahlobo alleged that some NGOs had funding they could not explain, interception equipment that the State Security Agency used and also accused some of these NGOs of funding student protests. He did not, however, name any of these.

Mahlobo added (also without naming anyone) that these “agents” had also infiltrated the mass media, community-based organisations, foreign multinational corporations, religious and student organisations, and included influential people and funders of opposition parties (feel free to add your own ideas to the list) and these all wanted to destabilise countries who did not share similar views to their own.

They could be the Illuminati, the CIA, the FBI, the Western Liberal Capitalist Industrial Complex, the hairdresser down the road. We just don’t know.

On Monday Moloto Mothapo, on behalf of Office of the ANC Chief Whip, issued a statement condemning Julius Malema’s threats that the EFF would not be afraid to resort to violence if the ANC continued to meet protesters with violence. (A statement redolent of one Mandela made in 1961 announcing the armed struggle to an international audience during and ITV interview).

He added that Malema had “assaulted the very Constitution he has recently waxed lyrical regarding his loyalty to it. South Africans must be careful of demagogues who wave the Constitution today but threaten violent and unconstitutional regime change the next day.”

When a government loses the moral high ground, or its authority and legitimacy, it cannot respond to resistance by its citizens and its opposition politicians with threats of treason or sedition or sabotage. It’s so 20th Century.

The ANC with Jacob Zuma as its leader (a man who has been shown by the highest court to have violated the Constitution and his oath of office, and who continues to ignore serious allegations of state capture by a family that benefits from its close proximity to the president) should stop its state security agencies from looking for “enemies” among the citizenry in a constitutional democracy. Instead it should look in the mirror, or perhaps raid a certain now-abandoned home in Saxonwold.