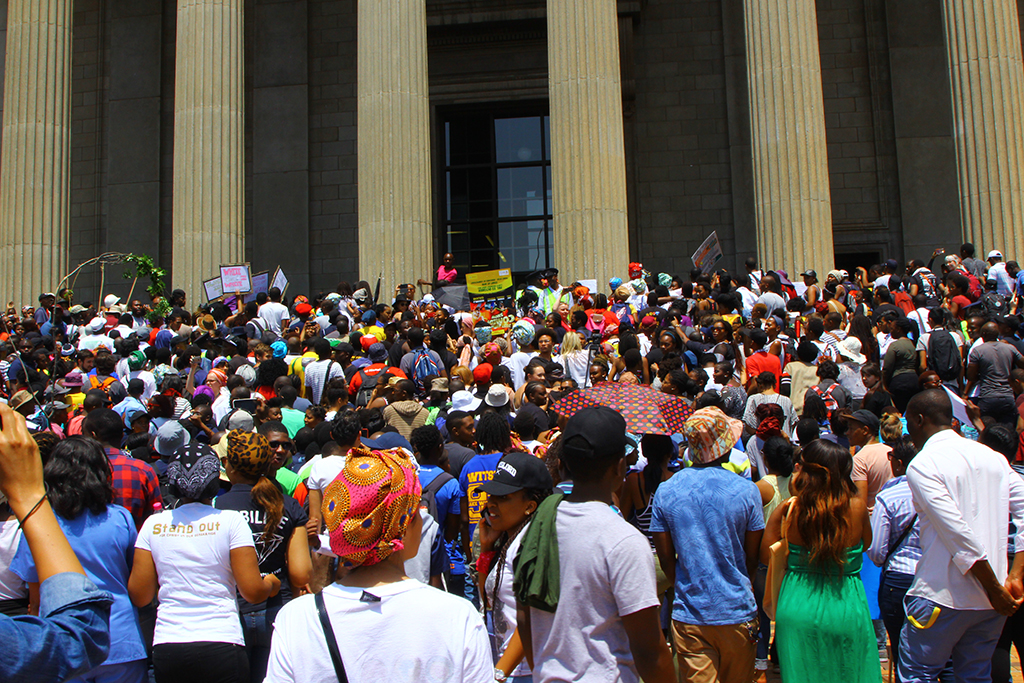 On the afternoon of 21 October 2015, something profoundly delicate, precious, something many had struggled for and fought for, was broken.  In watching police deploy tear gas and stun grenades against students sitting on the ground inside the Democratic Parliament, the phrase ‘first as tragedy, then as farce’ came to mind.

The tragedy lies in the fact that these scenes are playing out in the grounds of the democratic parliament in the year we are celebrating the 60th anniversary of the adoption of the Freedom Charter at Kliptown.  The tragedy lies in the fact that powerful elements of the post-millennial post-apartheid State, in both its public and private sectors, have co-authored and authorised the scenes.

It was chilling to watch young bodies fleeing the parliamentary premises through clouds of tear-gas, and policemen covered in the carapaces of public order maintenance gear, guarding the public servants on the inside of the parliamentary chambers who insisted on proceeding with ‘business as usual’ (the mid-term budget speech).  What country was this?  What time?

The responses to university students’ objections and protest at the inequality and inequity which pockmarks the post-millennial South African higher education landscape from the organisations and institutions of power have been dispiriting.  Between the silence (which began to resemble uncaring neglect) and the condemnatory postures, an opportunity to listen to and engage students on their concerns was lost.

Across the space of a week we have seen profoundly disturbing scenes from around the country.  Hands waving from the inside of police nyalas; the member of council who refused to abandon students and was arrested alongside them, or not quite arrested; bodies knowing themselves more valued standing as human shields to protect bodies less valued from violation.  What South Africa was this?  What country of whose mind and moral failure was this?

The term ‘kragdadig’ (with power, hard-handed, forcefully) sprang to mind in watching the scenes.  They are not new, in post-apartheid South Africa.  Such scenes are not even new in parliament.  But that the scenes involved students and police on the premises of parliament, an edifice we are told to regard as the citadel of democracy in a country where that term is given the status of a shibboleth, and where we are constantly reminded to treasure it, and protect it, shocked.

Something profoundly delicate, something inestimably precious which is inextricably linked with our need to move beyond our terrible collective past of violence and violation in South Africa, has been broken.  Whether the break is irremediable, whether we can put this experiment in and attempt at a new way of being in this fraught part of the world at the bottom end of this violated continent, remains to be seen.

But as we compulsively watch, flinch and look away, and find ourselves looking back, unable to fully grasp the import of the scenes unfolding before our eyes, on screens large and small, with and without sound, and it is still unclear which of the two options is more distressing, we must realise that this afternoon of 21 October 2015 will always be a crack in the mirror of our young and no longer quite so fresh attempt at bringing a different kind of society into being.

This is not the South Africa many of us dreamed of in the 1970s and 1980s, when scenes like the ones outside parliament on 21 October 2015 were part of the abnormality of apartheid existence.  In the span of a few hours, because of events that unfolded within the passage of minutes, something was revealed about a fundamental shift in the political values of post-apartheid South Africa post-millennial phase.

The violent expulsion of protesting civilians from the grounds of the democratic parliament to proceed with business as usual on a budget discussion: were the broken hearts many of us are nursing, these feelings of betrayal and shame we are struggling with, and the fact that this was done in our name, and in the name of freedom and democracy, worth it?