Why push is increasingly shove in African regime change 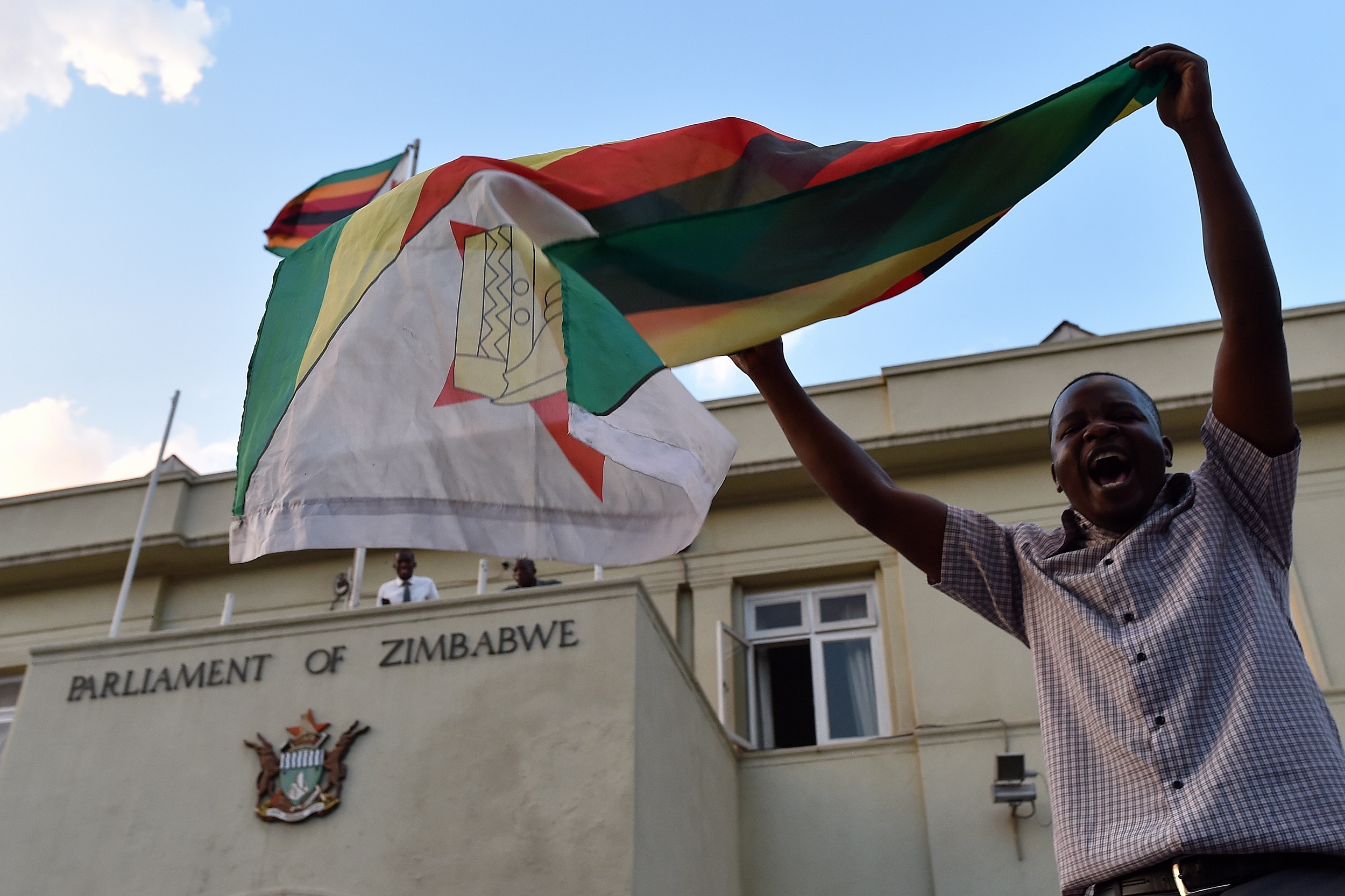 A man waves a flag as he celebrates the resignation of Zimbabwe's president Robert Mugabe.

After 37 years of outmanoeuvring his political enemies, Robert Mugabe was finally cornered on Tuesday and handed in his resignation, announced by the Speaker at a special joint session of parliament.

The army, his own party and his angry citizens combined to form a stranglehold on the 93-year-old leader from which he could no longer escape, ushering in a transition that, for now, is bloodless.

Zimbabweans are on the streets celebrating the end of a dictatorship, but any hopes that they will emerge into a shining democracy may be misplaced, said Rinaldo Depagne of International Crisis Group (ICG).

Regime change "does not necessarily mean more democracy," Depagne told AFP, and can simply be the consequence of internal factions fighting within the leader&39;s entourage or party.

That may well be so in Mugabe&39;s case.

He clung to power in the hope of assuring a dynastic succession, an obsession that would turn into his greatest weakness and which could hold lessons for other leaders on the continent, observers said.

Mugabe&39;s former deputy Emmerson Mnangagwa, whose sacking led to the autocrat&39;s downfall, now seems likely to be the next head of state.

Nicknamed "Ngwena" (The Crocodile) because of his fearsome power and ruthlessness, the 75-year-old Mnangagwa had initially appeared to have been outfoxed by Mugabe&39;s wife, Grace.

The first lady, who is 41 years younger than her husband, lobbied the veteran head of state to ditch his vice president, a long-serving lieutenant, to further her own political ambitions.

Efforts to position her as his successor triggered fury in the military that had underpinned his regime, and more broadly within his own party.

But what if it been Grace Mugabe rather than Mnangagwa who succeeded Mugabe?

"That would probably not have changed much for Zimbabweans," said Mathias Hounkpe, an expert in governance at the Open Society Initiative for West Africa (OSIWA),

Mnangagwa now heads Mugabe&39;s party, but once belonged to a committee of security chiefs who were accused by rights groups of organising violent campaigns to crush dissent.

He needed legitimacy, said Hounkpe, which the military could provide.

"The military did not want their action to be perceived as a coup," he explained, allowing protests to go ahead unhindered, among other measures, to gain popular support.

Charles Laurie of risk consultancy Verisk Maplecroft said the visible backing on Harare&39;s streets for the army&39;s actions was the final nail in the coffin for Mugabe&39;s time in office.

"While Zimbabwe&39;s military was the catalyst for events that toppled Mugabe, it is the force of will shown by Zimbabweans on the streets that ensured there was no turning back for military authorities or the beleaguered president," Laurie said.

The leaders of Gabon and Togo, who both succeeded fathers who had ruled for long stretches, may well be looking over their shoulders following the tumultuous events in Zimbabwe.

Gabon&39;s Ali Bongo Ondimba is accused of being the by-product of a "monarchy", while in Togo weekly protests against the government of Faure Gnassingbe, son of General Gnassingbe Eyadema, have led to the death of at least 16 people since August.

Some countries, even formerly strict autocracies, have moved to uproot ruling families from their ranks.

One of the first decisions of Angolan President Joao Lourenco, who succeeded Jose Eduardo dos Santos after his 38-year reign ended in September, was to fire his daughter Isabel Dos Sontas from her influential post as head of the Sonangol state oil company.

Whatever comes after Mugabe, his lengthy rule is becoming a thing of the past, regardless of whether democracy is flourishing.

"The idea of the leader who stays on for 30 or 40 years is less and less accepted in Africa," International Crisis Group&39;s Depagne told AFP, while fellow expert Yabi said the fall of Mugabe could signal to other ageing autocrats that "it may be better to go voluntarily."